1.For those that have never heard of you before, can you tell us a little bit about the band?
Gab: Zex are a female fronted punk/metal band from Ottawa Ontario. Our music can best be described as Dream Theatre, but punk
TASHA: We have an UK82 Power Pop influenced sound. Catchy riffs that get stuck in your head for days and a show that will get your attention quick.

2.How would you describe the musical sound that has been presented on your recordings so far?
Jo: While staying in the greater realm of punk or metal, we certainly don't try to copy. Plain and simple, we just want to do a memorable song. One that speaks to the heart and soul.
Tasha: Though heavily punk influenced, there is also a lot of metal style solo's and catchy rock n roll riffs that can be found as well.

3.What are some of the lyrical topics and subjects the band explores with the music?
Gab: I don’t write any of the lyrics, but a lot of our music centers around the idea of being true to yourself, but also about freeing yourself from the molds that society tries to pressure you into.
Tasha: I don't help lyrically. no one would want me to. I'm terrible at writing good lyrics. But I'm always happy to hear what Gretchen and Jo come up with: Live free and wild. Stand up for yourself. See and do everything!

4.What is the meaning and inspiration behind the name 'Zex'?
Jo: it means Zoroastrian Extreme Xenolith
Gab: It’s like sex, but with the letter Z.
Tasha: It's short. It's quick. It's easy to throw on a flyer or a t-shirt.It's easy to remember and SEX was already taken by an older band.

5.What are some of the best shows that the band has played so far and also how would you describe your stage performance?
Jo: Its as if we were rock stars that still retained our head below the clouds. We go on stage and act like Kiss while fully conscious that we're playing a 5$ show in a basement in Boston. Its as if we dressed like a Billy Idol who dumpsterdives and sleeps under bridges.

Gab: We like to throw things into the crowd. We played a show in Albany and threw a bunch of magic cards into the audience that we found in a dumpster and people were picking through them at the end of the show looking for good cards. It’s kind of like going to a Chucky Cheeses, you get about 40 minutes worth of fun, and you get go home with some shitty prize.

Tasha: Our shows are not something to be missed. We put a lot of thought into them. We have costumes, stunts and props and garbage that we throw at people. Everything from silly string to ABBA records. Jo and Gab have choreographed dance moves that can only remind you of seeing a great DEVO show back in the day. And we even have stage volunteers to help us with our ALICE COOPER like theatrics. It's a ton of fun being onstage with these 3 maniacs!
Some of the best shows we have played so far were: SKULLFEST in Pittsburgh last Aug. We also just got to play with The Angry Samoans a couple months ago. They were a big childhood punk influence for me.
The next one that comes to mind was here in Ottawa at THE HOUSE OF TARG. We brought garbage bags full of balls that you would find in a child's play place.We threw them out at the crowd and everyone went nuts. Throwing them at us, each other and even the bar staff got into it! My mom and older brother showed up and even my own mother biffed me right in the head with one! i haven't laughed that much onstage in a long time!

6.Do you have any touring or show plans for the future?
Jo: Yeah theres plenty of that, yet never enough. Zex will hit up some Canadian dates in December then After that Its supposed to be Asia and Oceana. There's talk of a more extensive US tour in the spring. 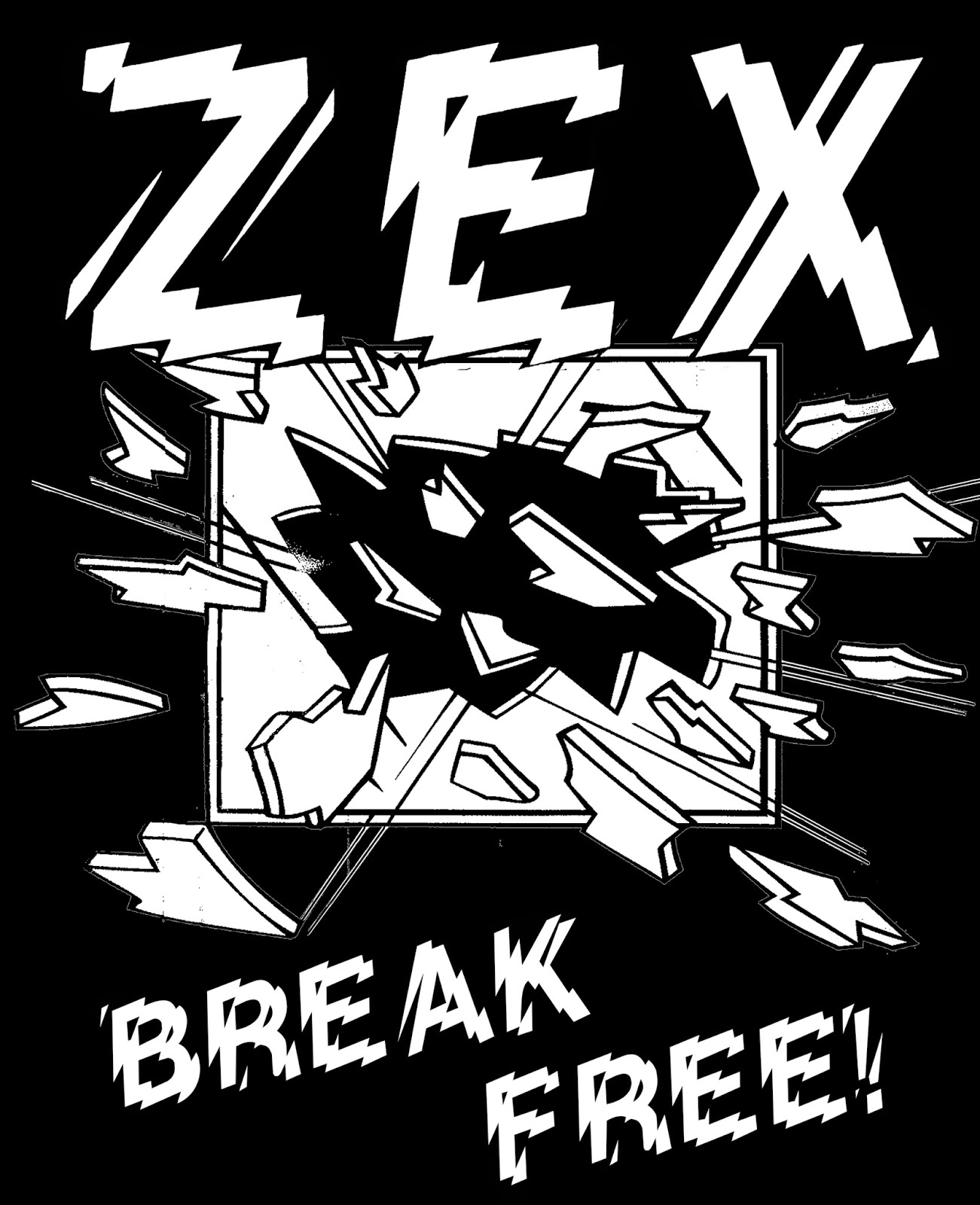 7.Recently Medusa Crush Recordings re-issued your singles on cassette, how did you get in contact with this label and also how would you describe the support they have given you so far?
Jo: We meet a lot of interesting people while in this band. Having the two singles re released on tape only broadens our distributions. For that we're more than grateful! Its worth mentioning that Medusa Crush did a good job with quality!

8.On a worldwide level how has the feedback been to your music by fans of punk and metal?
Jo: Well a broad cross section of punk rockers have been warm to our sound so far! I mean theres still people with horrible crust shoved up their ass so far that fail to appreciate a catchy tune when they see one, but generally people seem into it. Only the oldest of old school Headbangers seem to grasp Zex brand of hard rock. Those wit ha sensibility to 70's hard rock and the NWOBHM. There's always going to be haters and slanderers, but its nothing worth getting upset over ,as they're quite a small minority. Its nice to see people appreciate music that wasn't created to please in the first place.
Gab: People seem to really like us, other than a few mean youtube comments I haven’t really heard anything too negative. I think we appeal to a pretty broad audience because while we’re playing punk and metal stuff, our music isn’t too abrasive, but also not too poppy for those into that.

Tasha: We have had fantastic feedback worldwide. The amount of : support, kind words, labels who are interested, people putting out our tapes and offers to help with merch. It has been very overwhelming and really awesome. It seems every other week, Jo is letting us know about another crew of awesome punks and metal heads from another country or city that want to help us out, book us a show or help distribute the tunes. We are very lucky to appeal to and have support from both punk and metal scenes.

9.Where do you see the band heading into musically during the future?
Jo: Sticking to the same formula yet not writing the same song over and over again. For now we can only practice.
Tasha: Hard to say. Right now we are all just focused on becoming better musicians and putting on an ever better show than the last one.

Gab: I’ve been listening to the self titled Flock Of Seagulls album all week, that album sounds like the future. Musically I’d say my influences especially as a bass player are Rudimentary Peni, NoMeansNo, Dead Kennedys and The Ramones.

Tasha: Some bands that influence ZEX's drums are: Vice Squad, The Boys, The Damned, The Blood, The Rezillos, The Partisans.
Personally, i've always been heavily influenced by female fronted bands. Such as, Harum Scarum, Girlschool, Black Fork, DIRT,The Chitz,The Plasmatics, The Runaways etc. Other HUGE influences of mine are Motorhead, The Cure AND Thin Lizzy.
Right now, i've been listening to a lot of The Wipers, Leatherface and Chron Gen.


11.What are some of your non musical interests?
Jo: Hiking,traveling, swimming, drawing, gothic horror movies.

Tasha: Adventures, gore films and food. That's  pretty much it.Music pretty much takes up every other aspect of my life. It's also the only reason i work. I really just want to live in a van and tour for the rest of my life.
Also, i started a "reading theme". I'm only reading biographies or autobiographies about musicians that should technically be dead now but aren't. I recommend to you all , The Life and Times of Little Richard. One word. Insane.

12.Before we wrap up this interview, do you have any final words or thoughts?
Gab: In Home Alone, why did the camera operator just film everything instead of helping Kevin?

Tasha: Thanks from OTTAWA! STAY PUNK!

Posted by OccultBlackMetal at 4:44 PM