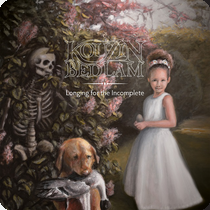 Kouzin  Bedlam  combines  a  variety  of  many  different  metal  and  rock  style  together  and  brings  out  a  sound  that  is  progressive,  retro  yet  modern  all  at  the  same  time,  the production  sounds  very  professional  while  the  lyrics  cover  mythology,  spirituality,  psychological  and  philosophical  themes.

Posted by OccultBlackMetal at 11:21 PM