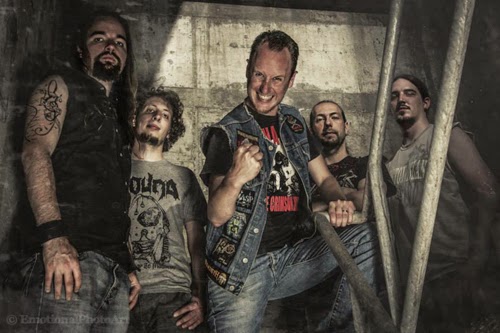 We're from Munich, Germany and we play a melodic kind of thrash metal, focusing our own identity.


2.Recently you have released an ep, how would you describe the musical sound that is presented on on the recording?

We want to sound unique and authentic. Over the years we developed our own style by combining bay area thrash metal like Testament, old Metallica, Exodus with some good old heavy metal like Iced Earth. This and a mix of the personal influences of the band members is what our sound could be described.


3.The band has been around since 2004 but so far this is the only release that has came out, can you tell us a little bit more about the 10 year wait?

The band was founded 2004. It was a completely different kind of music and band back then. We started playing this kind of music about 5 years ago, back in 2009. Unfortunately we had a lot of line up changes until 2013. After a few gigs and thoughts, we agreed that it was finally time to get a CD released, to show the people: Hey we're alive and check out Dissorted!


4.What are some of the lyrical topics and subjects the band explores with the music?

We don't really have a scheme. Most of our songs are about things that happen through the world. Things that we think should be dealt with, other songs about fictive things like zombies or stories.


5.What is the meaning and inspiration behind the name 'Dissorted'?

Back to the founding days the first drummer of Dissorted came up with “Dissorted”. Since this is not a regular word, we were asking him, what it means. He said, he had been sitting in front of a guitar amplifier and looking at the distortion knob. And as he was thinking about the word “distortion”, the name “Dissorted” came to his mind. We thought, that the name sounded good and we kept it.
This is what happens, if you confront drummers with guitar amplifiers…

I'd say we perform very active. By that I mean that we go full power and party as hard as we can on stage, because we have so much fun playing our music! And we really want to give that feeling to the crowd that they can freak out like us!
In my opinion the best show we played was in Westerstede near Oldenburg in northern Germany. We had so much fun, the crowd was just awesome. Nobody knew Dissorted until we played, but they liked it a lot and partied with us! Was totally worth it to drive 11 hours just to play about an hour!


7.Do you have any touring or show plans for the future?

We're planning the shows for next year. The next shows that are set are in the southern Bavarian region, but we're also planning on shows in France, Italy and Austria next year.

8.Currently you are unsigned, are you looking for a label or have received any interest?

We haven't received any interest by any label. We're not really looking excessively for one either. If there's any interest in signing us we would talk about it but there's no need to hurry, since we just released our first record.

Very positive actually. Especially from the U.S.. The Metal-heads over there obviously love this kind of music. Many people here in Germany, even those who aren't really into Metal like and buy our CD. Some radio stations in the U.S. and in Germany played some songs of us and interviewed us on the radio. It's just amazing and we're very happy that we get such a good feedback. That shows that all our lifeblood we put into the music is worth everything!

We don't have any plans for an album yet, but we're aiming at 2016. Currently we're writing a couple of new songs and it seems that the music is getting a little bit “thrashier”.

Our influences are Megadeth, Iced Earth, Testament and Exodus but we all have also different favorites which makes our music pretty multifarious

Some of us are very into football/soccer and follow especially the Bundesliga. Some of us love motorbiking. But most interests are all about the music.

The coolest thing for us, is to get in touch with the people at our concerts. So if you like our music, just come by and have a beer with us.
If you have already heard our record, feel free to give us some feedback – we are always open for that. And of course be aware of future actions of our band.