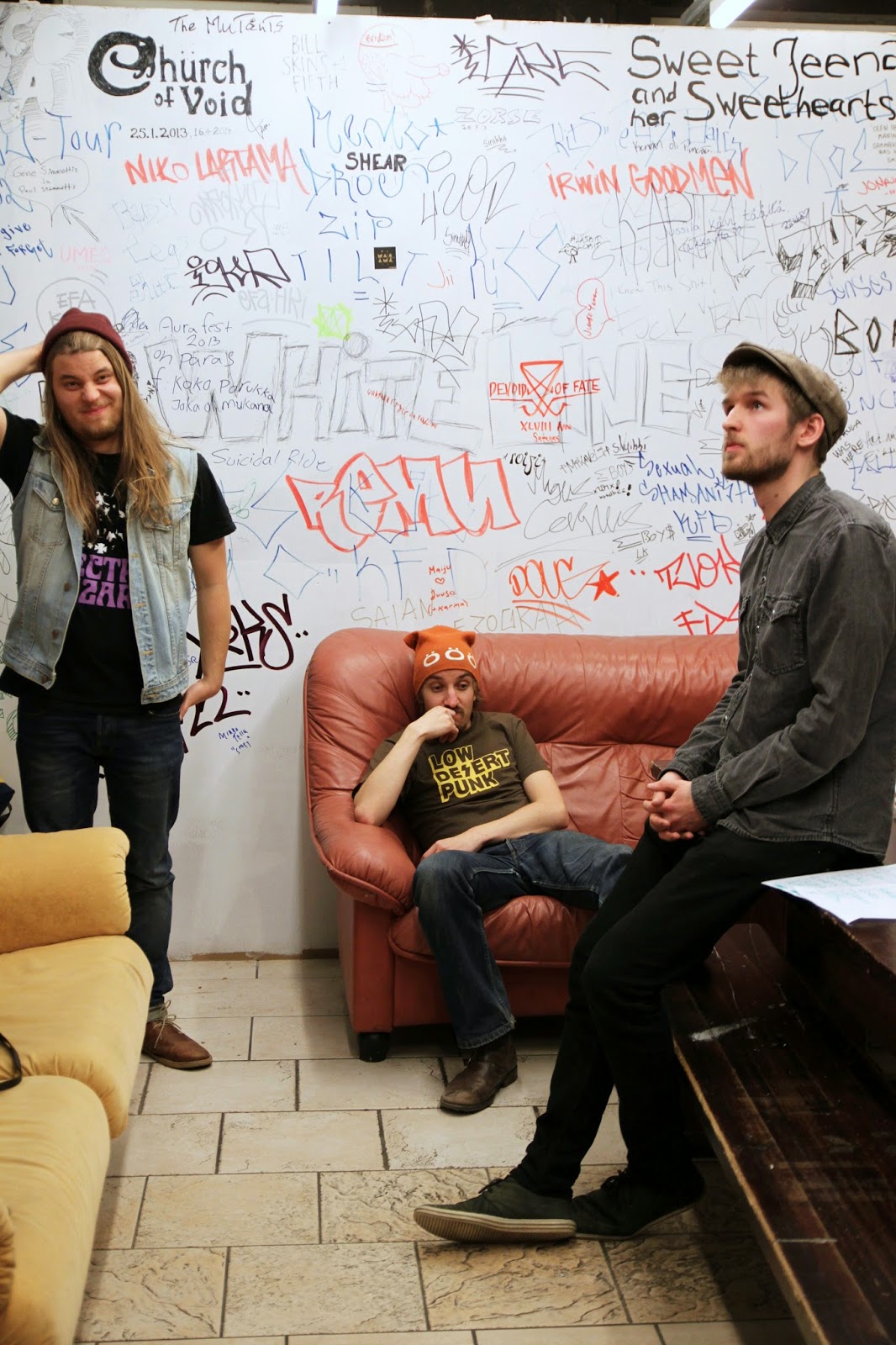 1.Can you give us an update on what has been going on with the band since the recording and release of the new ep?
1. Hey  Currently we are playing gigs in support of the new EP. We've also been practising like hell and are working on new songs too.

2.Recently you have released a new ep, how would you describe the musical sound that is presented on the recording and also how does it differ from your previous recording?
2. This time the overall sound is a little gloomier and perhaps slightly heavier compared to our earlier release "First Time You're Alive". Someone could also state that it's a bit more stonery. Perhaps the most important thing is that the new EP, Hopeless, sounds more like we actually sound live. Hell, the hidden track is a live recording!

3.What are some of the lyrical topics and subjects the band explores with the newer music?
3. fubear. lyrics in general are about feelings, ideas and views of the world. Perhaps in the new release, Hopeless, the mood of the lyrics is a bit darker than before. Santeri, who writes the lyrics, chooses not to reveal too much about the lyrics of the songs, as he feels that lyrics should be open to interpretation.

4.What is the meaning and inspiration behind the name 'fubear'?
4. Long story short: before we had a drummer, Martti (guitar) and Santeri (vocals, bass) watched this Canadian movie called Fubar. It's about two headbangers who drink beer and break stuff. Later on, Santeri said that if Martti was an animal, he would be a fubear. So there you have it! It doesn't mean anything and it's a reference to a movie about beer drinking, so there couldn't possibly be a better name for the band. We actually watched the movie with Vellu (drums) just a few weeks ago. He liked it!

5.What are some of the best shows that the band has played so far and also how would you describe your stage performance?
5. Opening for Red Fang in our hometown was just amazing. It was our fourth gig, so that was pretty big at least for us! The gig was good and Red Fang were really nice, so we have warm memories about that. More recently we played in our Hopeless EP record release show, and we had a fucking blast! Overall, we try to be as tight as possible live. fubear live shows are energetic and a bit tongue-in-cheek. We really enjoy being on stage and we hope that it shows! The feedback from our fans has been very positive about our live shows.

6.Do you have any touring or show plans for the future?
6. Well, of course, we would like to play live as much as we can. We have some shows coming up in Finland next year, and we have also talked about getting our funky asses to tour somewhere in Europe, perhaps Germany or something. But since we don't have a label or anything, it would be a DIY-kinda tour and needs a lot of work to book the gigs etc. Of course if we get discovered by a label it's gonna be a totally different ball game. So we'll see what happens.

7.Inverse Records released your ep on digitla format, are there any plans in the future to release your music on either vinyl or compact disc format?
7. Both EPs have been pressed on CD, however we're talking about small pressings for promotional purposes mostly. There's still a limited edition CDs left, which you can order from Record Shop X. They ship worldwide! Vinyl would be very cool and it would really showcase the awesome artwork Sirpa Varis has done to all our releases. We have to look into that..

8.On a worldwide level how has the feedback been to your music by fans of grunge and stoner rock?
8. The new EP hasn't been out even for a week now, so it's pretty hard to say. It's our first proper release with Inverse so it's the first one to get reviews outside of Finland. We've only had a few reviews so far, but mostly they have been pretty good.

9.When can we expect a full length album and also where do you see the band heading into musically during the future?
9. We have started writing our debut album, but we still have a shitload of work to do before we could even talk about heading back to studio. First lets see what happens with the release of Hopeless. We haven't talked about where we're heading musically, but most likely the new stuff is also going to be fuzzy, raw, full-on rock n' roll, cos' that's what we do. Of course, we are constantly improving as musicians and as a band so there is definitely some awesome shit coming your way.. Beware of the bear..

10.What are some of the bands or musical styles that have had an influence on your music and also what are you listening to nowadays?
10. When Martti and Santeri started the band, they talked about playing some sort of grunge, influenced by Soundgarden and Alice in Chains and stuff like that. When they got Vellu to join the band, there was already talk about having some Kyuss influeces etc. But since we really started to play and make our own songs, we kinda quit comparing our stuff to any other. Sure, there are influences here and there, but now we just like to do our own thing. We got a nice connection with each other, so it's easy just to jam and play something that we all find cool. We all listen to all kinds of music. Lately, Martti has been into doom, "retro rock" and some a little more occult stuff, like Uncle Acid & the Deadbeats, Mount Salem, Electric Wizard, Conan, Graveyard, Seremonia, Witchcraft, Horisont etc. Santeri used to listen to a lot of metal some years ago, but nowadays prefers softer rock bands. Some of his favorites include Soundgarden, Beck, Father John Misty, Bruce Dickinson, Audioslave, Pink Floyd and Queens of The Stone Age + many others. Drummer Vellu listens a lot of music from different genres, from stoner rock to funk, especially likes psychedelic and groovy stuff. Lately Vellu has been listening to the new Monster Magnet records (Last Patrol & Milking the Stars), new power trio KXM, new & old Funkadelic, a lot of Clutch, and to mention some other big ones for Vellu: Nine Inch Nails, Suicidal Tendencies, Public Enemy, James Brown...

12.Before we wrap up this interview, do you have any final words or thoughts?
12. May the bear be with you! Hopefully we can play our music live to people all over the world. Meanwhile, listen to us in Spotify (you can find our earlier release there too!) or buy our EP from a digital store and give us your support, if you can! Thanks for the interview, John, we appreciate it!
Posted by OccultBlackMetal at 1:06 PM