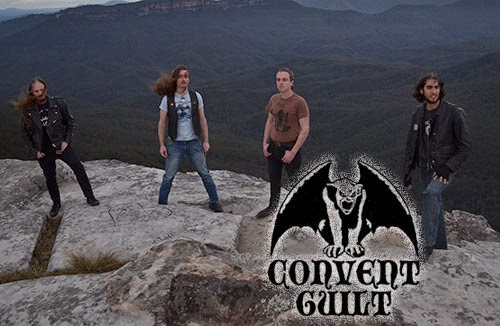 1.Can you give us an update on what has going on with the band since the recording and release of the new album?

I sure can. Since recording earlier this year we spent the usual amount of time working on mastering, artwork, layout and the like. We haven’t played many shows this year, though we played with Tankard and Abigail in July before headlining a festival in Bendigo, Victoria two nights ago. Beyond that, we’ve started working on new songs, so the well isn’t completely dry.

Nothing has changed too dramatically, which will please some and displease others. As is usually the case, the album is a bit more polished and streamlined than the demo, though we retained the raw and energetic feel of the demo to a great degree. I would say there is more diversity as well, which the length of an album gives you the chance to explore.

3.The music on the album had a very heavy NWOBHM vibe to it, do you feel this style has been making a comeback over the last few years?

It has certainly made a comeback, as everything inevitably does. That said, I think you can tell the bands who are genuine about the music they play and those who are just jumping on a band-wagon. With Convent Guilt we love a lot of NWOBHM bands but are not specifically trying to capture that sound. Resemblance to those bands in fact probably reflects our limitations as much as anything.

4.Your lyrics have a very dark tone to them, are any of the band members interested in occultism?

As the lyricist I guess I’m best placed to answer this… While I have a passing interest in occultism (and a lot of other things to boot) I can claim no knowledge of it and certainly don’t practise it. No one in Convent Guilt does. The only song that explicitly deals with that sort of thing is ‘Perverse altar’ and that is more about process than principles. There is a dark tinge to most of my lyrics simply because I find that more possessing; for the same reason I find myself drawn to dark themes in literature and cinema. At the same time I try to keep my lyrics positive, as dark doesn’t necessarily have to mean depressing.

5.What is the meaning and inspiration behind the name 'Convent Guilt'?

Convent Guilt is a name that came to me a few years ago, when I was trying to marry two words to create a tough, memorable and slightly enigmatic band name. The idea behind Convent Guilt is that even if someone hides themselves away from all temptation – in a convent, cloister or cave miles below the earth – by adhering strictly to the Church’s guidelines on sin they will inevitably transgress, simply due to the way that all human beings are. With sin comes guilt and with guilt comes us.

To be honest – and not just because it was only two days ago – the show in Bendigo on the weekend was probably the best yet. Killer response and one of those shows where we felt comfortable and ready to rock. Our set at Evil Invaders Festival a couple of years ago was a triumph as well. Our stage performance is about light, smoke and energy; about rocking out rather than playing every note perfectly. We want to engage with our audience rather than put them to sleep.

The next shows we have lined up are at a biker festival in Bathurst at the end of the month and then Hobart in early December. We have some ideas about the new year, including a bit of an album launch in Sydney, but we’ll deal with that once the album is actually out (which is any day now).

8.The album has been released on vinyl by Cruz Del Sur Music and will be released in January on cd by Shadow Kingdom Records, do you feel working with both of these labels has been very  helpful for getting your music out there heard?

Oh, it sure has. The demo was released by Abysmal Sounds here in Australia and that was perfect, as it got the name out in the underground and forged a path for other opportunities. Working with Cruz del Sur and Shadow Kingdom has however taken things to a new level. Even before the album is available to the public there has been an immense amount of promotional work done, which we really appreciate. I have no doubt more people are hearing about us now thanks to the efforts of these labels.

9.On a worldwide level how has the feedback been to your music by fans of heavy metal?

So far the only album feedback has been from reviewers (un)fortunate enough to receive promo copies. Some has been positive while some has been negative. You get that. What I really am waiting for is the response from our diehard underground fans when they hear the LP. I love that we can expand our audience, but the underground is always where the essense of heavy metal lies and it is those fans whose thoughts really matter most.

10.What is going on with some of the other bands or musical projects these days that some of the band members are a part of?

At the moment our drummer, Brent, is the only Connie G boy active with other projects: his rugged death/thrash outfit Sluggard is going great guns, while he has a couple of other irons in the fire as well. Three quarters of Convent Guilt played in Shackles for years, though the two bands were never active at the same time. I also played in Ghastly and Trench Hell, though those bands have been laid to rest.

That’s hard to say. We won’t change dramatically, but what I enjoy writing this kind of music is the scope to experiment and try different things. On ‘Guns for hire’ we have the track ‘They took her away’ which is like an Irish ballad; I had that idea during the Shackles days but it didn’t fit a death/thrash band. I think we’ll incorporate other ideas on the next album, as well as improving the overall ‘sharpness’ of our song-writing and performance. Who knows, we might even write a love song haha.

The influences haven’t really changed from the start of CG – and most are bands we’ve been into for years. Our tastes vary, but there’s a solid core of bands like AC/DC, Rose Tattoo, Judas Priest, Scorpions, Motorhead, Riot, Aerosmith, Thin Lizzy and NWOBHM bands such as Trespass, Cloven Hoof, Iron Maiden, Sparta and Holocaust. I also love bands such as Lynyrd Skynyrd, ZZ Top, Sweet, Queen, Heart and Cheap Trick. I still listen to a lot of late ‘80s/early ‘90s death and black metal as well. There is a lot to be influenced by in everything I mentioned there.

Good question, because I think a band should reflect influences from more than just music. Show me a man who is interested in one thing only and I’ll show you a man who is boring as hell. Literature and movies also get my imagination flowing, even if I am pretty selective. History (especially Australian history) is a source of fascination and inspiration for Convent Guilt’s lyrics and image. Being a red blooded male, I am also interested in sport (rugby league and cricket predominantly), quality beer, whiskey and women. Life is a rich tapestry: don’t just use one corner of it.

‘Guns for hire’ will be out any day now on LP (Cruz del Sur Music), CD (Shadow Kingdom Records) and tape (Dying Victims Productions). New shirt designs will be available from those labels soon as well. For more information contact www.facebook.com/conventguilt. Thanks for the support and good luck with the ‘zine. To the headbashers and hellcats out there: our guilt is on your conscience.
http://shadowkingdomrecords.bandcamp.com/album/guns-for-hire

Posted by OccultBlackMetal at 8:53 PM