1.For those that have never heard of you before, can you tell us a little bit about the band?
Sevi: We’re a young old school metal band from southern Bavaria, Germany.
Somehow we created our own style, which we call EPIC SPEED METAL. It’s maybe hard to imagine what this would sound like, but it really is speeded up epicness. We underline our heroic lyrics with old school riffing like Running Wild did it in the 80’s.

2.So far you have released 2 ep's and a full length, how would you describe the musical sound that is presented on those recordings?
Sevi: Lenny, that’s a question for you!
Lenny: All right, the first one was rather a tryout than a real release and it was with our first singer, who quit the band quite fast. The second one “St.George” was with the same tracks plus bonus tracks and with our current singer. This one is slower and sounds more NWOBHM. One of our favorite bands SPARTA said it sounds like them 30 years ago.

And in June we released our full-length album “The Missions Of Heracles”, which is a concept album. It deals with the missions Heracles has to solve to save the souls of his family. He has to defeat different creatures, like the “Horses Of Diomedes” or “Hydra”, which is our most popular song so far.
Sevi: On this record we received the EPIC SPEED METAL sound we wanted to create.
Lenny: Yeah, It’s more … BAM!It is definitely more powerful than“St.George”.

3.Your lyrics cover some historic and mythological themes, can you tell us a little bit more about your interest in those topics?
Sevi: Yeah, we dealt with historical themes already on “St.George” and then came “Hydra” and we thought it would be cool to make more missions of Hercules.
Lenny: The missions were lyrically very good material to write songs, but it was a lot of work. Of course it’s a songwriting corset to concentrate yourself only on one theme, but the result is quite nice I think.
And I can tell you that our second album will contain a concept, too.

4.What is the meaning and inspiration behind the name 'Skullwinx'?
*Sevi laughs*
Lenny: Ouh … that is very complex to answer. The story behind the name hides behind our add-on “The Relic Of An Angel”.
The idea deals with the question: “What is if god sends us a sign?”. We’re no white metal band, I can tell, but the topic is a good one to think about.
The name is explained in a song, which might appear on the next album.
The story of the song takes place in the middle ages. And a monk finds a piece of an angel, a bone of a wing (This is where “Skullwinx” comes from). Of course all the people want to see or even own this real proof of god’s existence. So a big battle starts, just because of this relic. At the end of the battle, when everyone is dead, this monk stands on the field with the wing in his hand and thinks about the meaning why god sent the sign. The question if it had been better when god wouldn’t have sent the evidence to earth.
Kind of cheesy-deep stuff but….hell yeah!

5.What are some of the best shows that the band has played so far and also how would you describe your stage performance?
Sevi: Our stage performance is very energetic and active. We have a straight leather look inspired by Judas Priest and Tank.
Our best shows so far were our release gig, because of the many people who came and the cool other bands we played with. The other awesome gig was in “our hometown”Holzkirchen, our metal family. The concerts there are relaxed and much fun.

6.Do you have any touring or show plans for the future?
Lenny: yes we do! We just signed at a booking agency and we hope they can deliver us great shows all around Europe.

7.Currently you are unsigned, are you looking for a label or have received any interest?
Sevi: Yes we’ve received interest, but these weren’t the deals we’re looking for. Currently we want to stay free with our debut album. So we have the control about the pressing and get the full support from the fans through the sales. But it’s not easy to support yourself.

8.On a worldwide level how has the feedback been to your music by fans of metal?
Lenny: It is very interesting that many Greek fans enjoy our concept album. One may think they already know the story of Hercules, but I think they like the epic music combined with their tradition. We like them .

9.Where do you see the band heading into musically during the future?
Sevi: I think we’ll head to more speed and even more epicness! I think that Lenny can develop himself for songwriting and maybe one of these characteristics will get stronger. Well, let’s see what the future will bring.

10.What are some of the bands or musical styles that have had an influence on your music and also what are you listening to nowadays?
Lenny: *heavy breathing* I can’t decide … Of course you can hear some Riot and Running Wild influences in our riffs. The rhythm changes may come from Iron Maiden. Our singer listens a lot to Blind Guardian and one can definitely hear these influences.

11.What are some of your non musical interests?
Sevi: We’re from Bavaria, so beer is an important part.
Lenny: Sevi does a lot of sports.
Sevi: And Lenny tries to!
Lenny: Hahaha. And we’re all still in the education part of our lives (school or university).

12.Before we wrap up this interview, do you have any final words or thoughts?
Sevi: We’re happy that young bands are supported well in the scene and there are still people who are interested.
Lenny: So thanks for the interview! 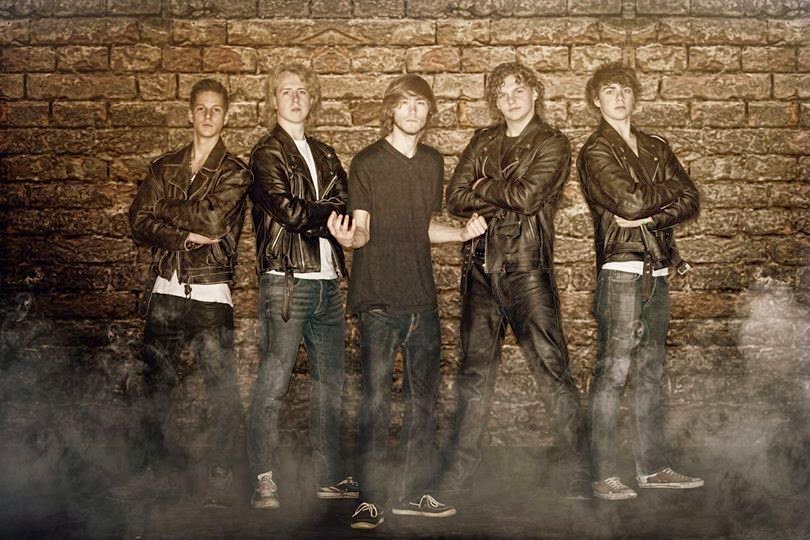 Posted by OccultBlackMetal at 4:32 PM