.Can you give us an update on what has been going on with the band since the recording and release of the new album?

Ian:
Hi , yeah we have been busy gigging also planning our own promo campaign for the albums release. A few weeks ago we just finished recording a promo video for the album , its for the song Killers the only cover on the album. Its a real eye opener we think and we are looking forward to every ones opinion when it goes out on 18/11/14


Gary:
I would identify the sound and style as very typically English and traditional ...The songs we picked were
specifically because we believed them to have a very English feel with maybe a hint of thrash in places , we were also very conscious of an obvious continuation from our last studio album too even to the extent we would play songs from the past back to back with new songs just to see how comfortable they felt ...I have to say the fit was obvious to anyone who heard the songs presented this way. The material differs because we are now a five piece and have two guitars , back in our early incarnation we were a four piece ,who curiously always wanted to be a two guitar band , like Maiden , Judas Priest , Accept ect we just couldn't find the right guy at the time back then


3.The band was broken up for 20 years, what are your thoughts on the way metal evolved during that time and also where do you feel you stand in today's metal scene?

Metal has evolved and branched out into fragmentary genres , its something we never imagined happening back n 83!!! but that's how it is I think we would prefer everything to be under the description of Metal than a thousand sub genres but we are where we are , due to this I think we stand solid within the "genre" of underground UK NWOBHM .
(unlike Maiden and Def Leppard  who are very big but of the NWOBHM)

Gary:
This album covers a lot of ground lyrically.  . from doubting the word of organized religion on one song , to deep space exploration , seeking intelligent life and the answer to or own origins on another!!!!   Its complex and a product of storing ideas that would be good for song ideas for a few years prior to writing this album LOL I think we have read a few more books since we were young songwriters!!

5.What is the meaning and inspiration behind the name 'Avenger'?

Gary:
Back in he early days , Brian Ross , Mick Moore and I had played together in another band that didn't work out and we decided to form our own band which became Avenger and maybe Avenger was us deciding we would avenge a situation we were unhappy with as we were frustrated with the earlier band....It felt that way at the time!!

Ian:
Ah its difficult , there's been loads of great shows ,  however I will name three of my personal favorites
Supporting Y&T in 2005 at he old London Astoria before it was demolished , it was a sold out show and we had not long re-formed , we got an awesome reaction and I then knew 100% it was worthwhile getting back together.

Playing at HOA Germany 2007 which was the first time we played any real amount of new material . Gary and I were very worried  how the songs would be accepted but the crowd loved them and It was a very big deal to us all , that we could write convincing new material that the fans of the band could still identify with.

I would like to add our last festival as my third choice which was the "Rock you to Hell festival in Athens Greece.... great people , great line up and organization and for a city we had never played in before a killer reaction from the Hellenic metal fans for Avenger.

Our stage performance....that's easy...no bullshit down to it.....in the style of our hero's  Riot , The Rods , Raven ect...no tinsel no gimmicks. 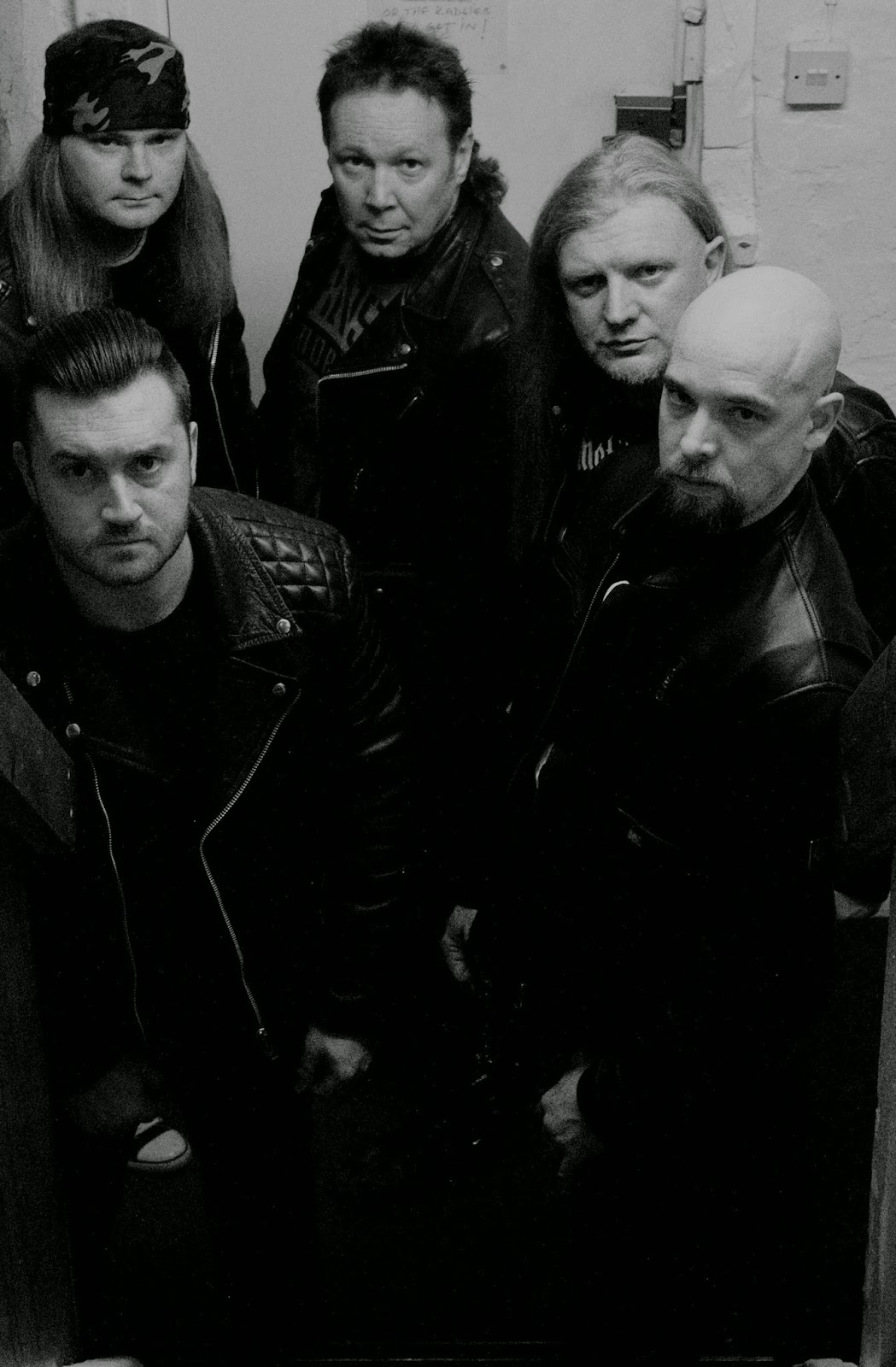 Gary:
Yes we will be out on tour in Europe in March and October 2015 with summer festivals in between , we are currently working on returning to both South and North America too.

8.On the new album you did a cover of Iron Maiden's "Killers", what was the decision behind doing your own version of this song?

Ian :
No deliberate decision to do it , we had covered it live for years and knew we done a good version of it. We recorded it and because the recording come out well we used it thats all.

9.The new album was released on Rocksector Records, can you tell us a little bit more about this label?

They are a family run label from Manchester UK who supports old school UK metal , amongst their current artists are Avenger (of course) Tygers of Pan Tang , Tysondog , Absolva and a good 12 more , It looks like they are expanding into even more acts for 2015.

10.On a worldwide level how has the feedback been to the newer music by fans of metal?

Gary:
Feedbacks been 100% positive and what's more positive is more and more young people discovering our music , its is no longer a nostalgia situation. It has a future and continuity.


11.What is going on with some of the other musical projects or bands these days that some of the band members are a part of?

Ian:
Here we go . I do not have any side musical projects , Sean and Liam our guitarist's have recently joined UK Maiden tribute band Maiden England , Gary plays in an Old School style Death Metal band called Repulsive Vision a bit like Atheist or Exhumed to listen too  , Ian "FUZZ Fulton our bass plays plays in classic rock covers band called Sweet Sympathy.


12.Where do you see the band heading into musically during the future?

Gary:
We intend to remain loyal to our NWOBHM roots... and anyone who likes albums such as Iron Maiden 1 , Saxon Wheels of steel mixed with a hint of thrash will need to check out our future releases because that's how we will be thinking when we write.


13.What are some of the bands or musical styles that have had an influence on your newer music and also what are you listening to nowadays?

Ian:
I Think we have tried not to be influenced too much on what we have done recently and concentrated on ourselves , how we sounded back then , how we may have sounded if we hadn't split up in 86 and how we dont want to sound!! and what to avoid.
I think these days we listen to all kinds of stuff...literally from 70's classic rock to more modern bands. None of us are really in love with the very modern metal scene though....Black Veil Brides...fucking Baby Metal ect...what the fucks that about!!


14.What are some of your non musical interests?
Avenger:
Liam:
Body building , martial arts , chilling with my girlfriend and computer gaming

Fuzz::
performing stunts (see me on youtube) fire breathing and even though this is supposed to be a non musical answer , collecting guitars.

15.before we wrap up this interview, do you have any final words or thoughts?

Gary:
Thanks everyone for the continuing support!!! The new Avenger album "The Slaughter Never      Stops" is released December 1st , check it out and see you in 2015 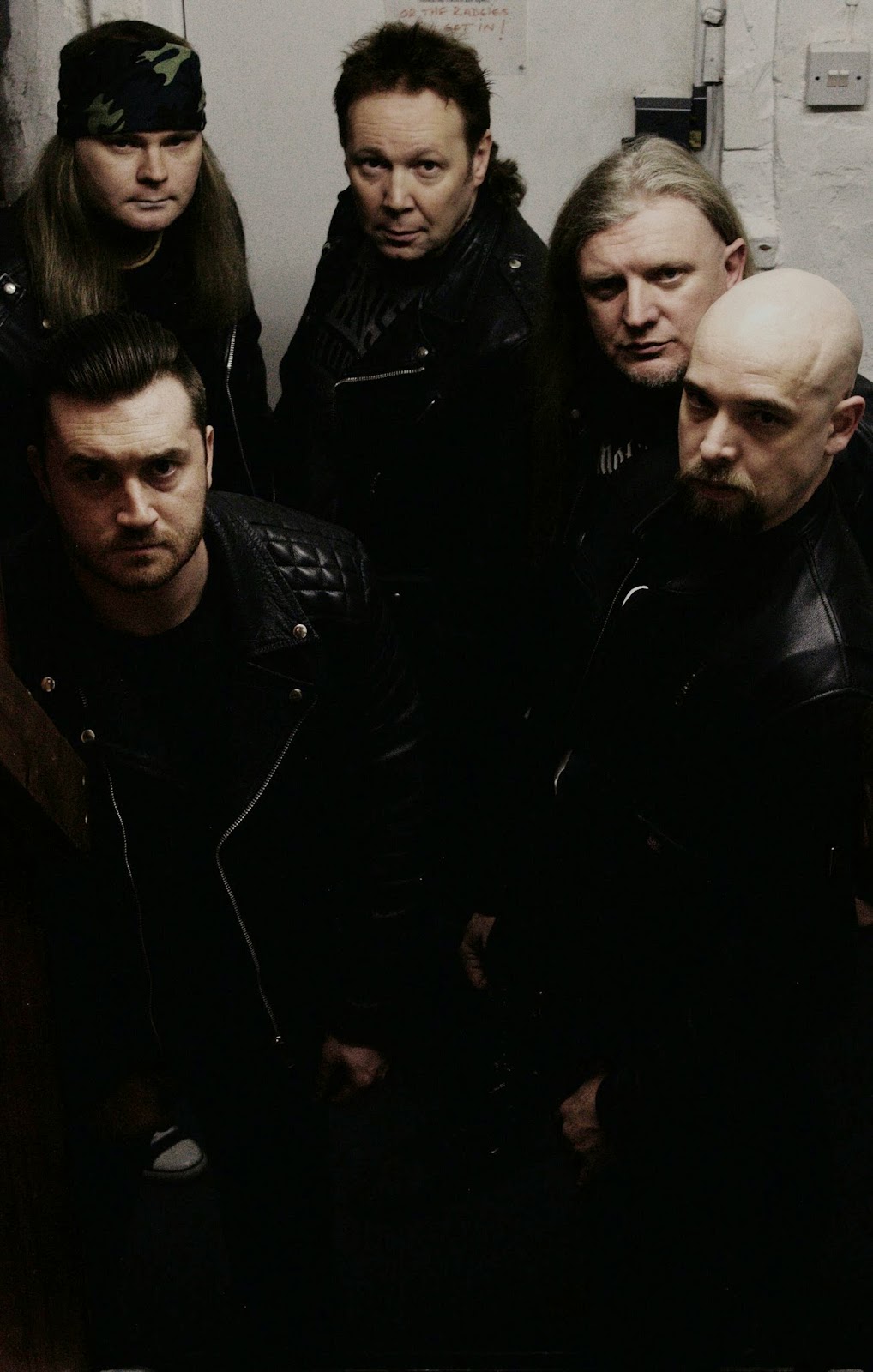 Posted by OccultBlackMetal at 4:04 PM