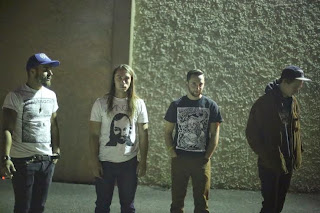 1.Can you give us an update on what has been going on with the band these days?

It has been a busy few months for us. Coming out of the summer festival season, we have been focusing heavily on writing our first full length album as well as getting our new EP “A Tapestry of Scabs and Skin” ready for release next month. We have a couple of local showcases happening in December and January and from there it’s back in to the studio and back out on the road.

2.You have a new ep coming out in December, how would you describe the musical sound that is presented on the recording?

This EP is an interesting one because it combines two separate recording sessions that took place over a year apart. It features a musical diversity that has grown in that time but the songs still work together. At least I feel that way. Consciously, the aim was to make some big, riffy metal songs but our influences in atmospheric post rock and 70’s prog have found their way in as well.

We try to create an image or situation that suits the mood of the music. Obviously with heavy music the topics tend to be about fear or frustration, loss or passion. We struggle with choices everyday and to be able to create a scenario in which the character in the story has to choose between infinite knowledge coupled with certain death or an eternal life bound by regret makes deciding whether to get skim or homo milk for your cereal seem a lot easier.

4.What is the meaning and inspiration behind the name 'Astrakhan'?

It sounds bad ass. Band names are hard. I like star trek.

We have been really lucky to be able to play with some pretty incredible bands in the short time that we have been together. Some highlights for me were playing with Cynic, Helms Alee and Weedeater. As far as our performances go I find we put on the best shows when we are pissed off at each other or at something else before we play. Adam and I busted each other up pretty bad the night before we played a show and we hit the stage sporting matching black eyes. There was pure, white fire coming from both of us for those 45 minutes and everyone could feel it. That’s why we watch bands isn’t it? To feel what the musician is feeling, to understand the music on a physical level.

6.Do you have any touring or show plans once the ep is released?

The focus is mainly on getting the new album finished and recorded for now. We have a few shows in the works in Vancouver in the spring and then hopefully a tour later in the year.

7.The ep is coming out on War On Music, can you tell us a little bit more about this label?

Yea, Charley at WOM has been a gem in helping us get this thing together. He’s been a huge support for a few Vancouver bands like Bison, Anciients, and Black Wizard and we are pleased as punch to be added to the roster.

It’s been extremely positive. As much as we are just doing this to get the ideas out of our heads and on to tape, it’s satisfying to know that there are like-minded people all over the world that appreciate what we are doing.

When we started this band we decided that it was important to choose a sound and stick to it. Not to be derivative and repetitive but to dig deep in one area instead of spreading out over many. Who knows though, I found an oompah tuba record that I really liked the other day and I might feel like the next song needs a bit of that in it.

Our tastes are pretty different from each other so I can really only speak for myself. I can’t stop listening to the new Pallbearer album. That and a lot of Hungarian gypsy music has been catching my attention lately.

As part of our initiation into the Astra-cult we cast off all worldy interests and vices. There is heavy riffing and nothing more.

Shit, I should have used the last sentence from the question before this one. That would have been a strong closer.
www.waronmusic.com
https://www.facebook.com/astrakhanofficial
Posted by OccultBlackMetal at 10:18 AM