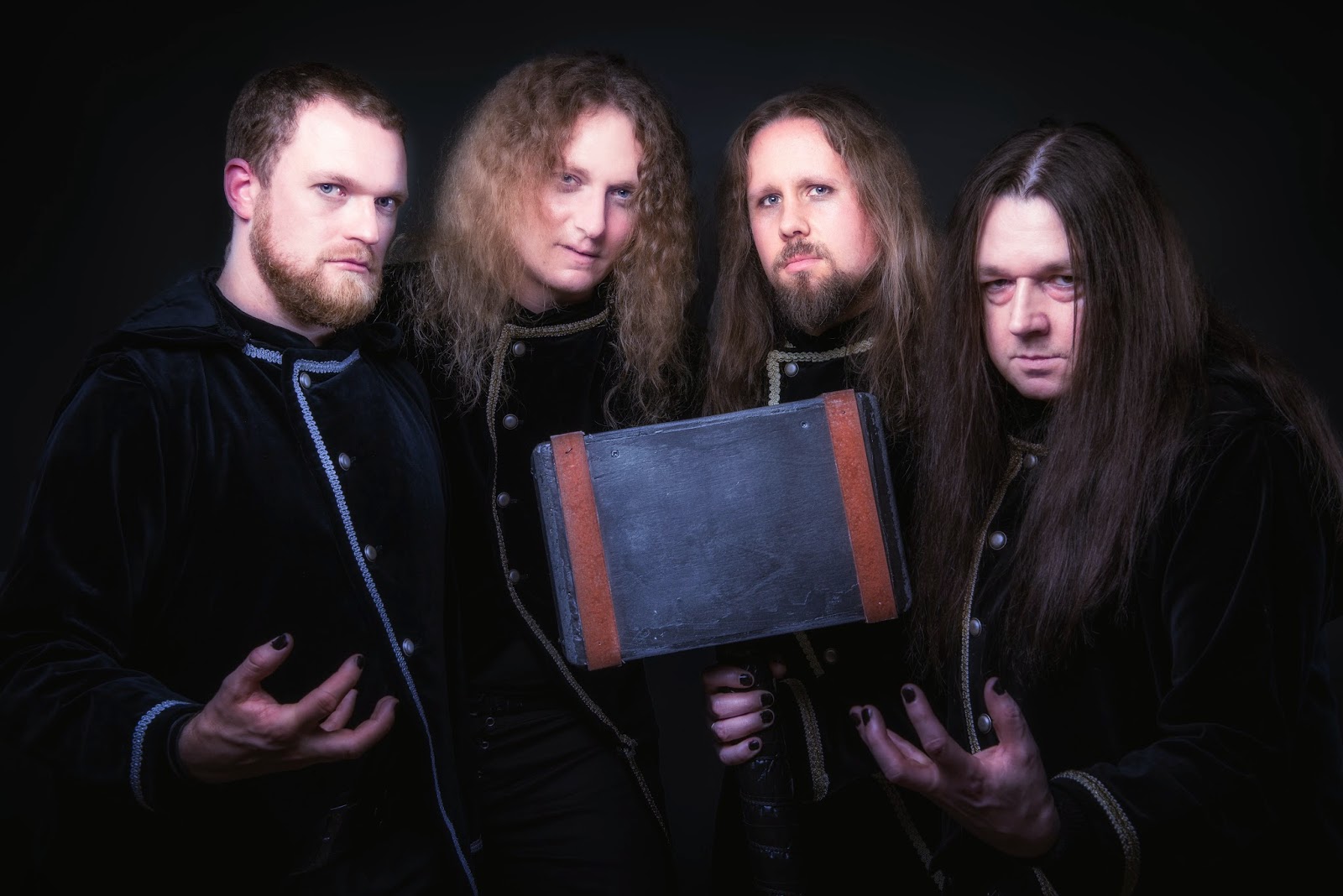 Titan Fox: We are Hammer King, the Heavy Metal Feudalists from Saint-Tropez, hand-picked by thy majesty, the Hammer King. The band was founded in 1978, but has been on hiatus until 2013. Then the time was right for the King to return with the first ever album. We have Dolph Aidan Macallan, the keeper of the whiskey grail on the drums, K.K. Basement on Bass, the incredible Gino Wilde on Guitar and me, Titan Fox, on vocals and guitar.

2.You have your first album coming out soon, how would you describe the musical sound that is presented on the recording?

Titan Fox: "Kingdom Of The Hammer King" is a very direct Metal album. This is live and real Metal – no triggered or programmed drums, no keyboards, no samples, all vocals and choirs are sung by the band. No guest musicians.
We have proudly signed with Cruz Del Sur Music from Italy, a label that in my opinion has a very well-picked sortiment of bands. We feel in great company and the support has so far been very very great. We recorded the album at the Greywolf studios with Charles Greywolf from Powerwolf. Charles has been killer to work with, he was very supportive and we had one hell of a great time in studio.

Titan Fox: The key-piece on the album is the "King With The Sword And The King"-trilogy consisting of "I) – Kingdom Of The Hammer King", "II) – I Am The Hammer King" and "III) – Glory To The Hammer King". The trilogy tells about the Hammer King and we have made a video for the first part. The songs are not back to back on the album but build the frame around the album being #1, #5 and #10.
We also have a tribute to James Bond in "Figure In The Black" and the exclusive vinyl bonus-track tells the legend of the "Leather Indians" who have killed many many cowboys by having them anal-fucked by the entire tribe. They did never surrender and their resistance needed a tribute. The classic battle cry of the Leather Indians is heard at the end of the song: Tawumba, Tawumba, Tawumba!

4.All of the band members are veterans that have played metal for a long time, what is it that keeps you motivated after all of these years?

Titan Fox: The motivation is Hammer King – we want to deliver the best we can when we work on new songs and when we play shows. We want to make the best music we have ever made and this is our real motivation. We want to keep getting better in all we do. Gino for example has never been a stronger guitar player than on this album. This album contains Gino's best solos since the recording of "Painkiller".

5.What is the meaning and inspiration behind the name 'Hammer King'?

Titan Fox: There is a saying in German "Eulen nach Athen tragen". This means that you cannot explain something that already is very obvious. The Hammer King is a fierce-full ruler, but he is true at heart when it comes to Heavy Metal. He is a brutal warlord, he is killing, plundering and he is taking the wives and daughters of his enemies and of his own folks. But he is a damn fine song-writer. He has given the songs to us and we will fulfill our obligation to represent the Hammer King – and hereby represent Heavy Metal!
The Hammer King is introduced in the "King With The Sword And The King"-trilogy and there will be more stories on the next albums.

Titan Fox: We have only played a handful of shows so far but they have been amazing! Wherever we have played, the audience has screamed "Hammer King! Hammer King!" – our stage performance is very dedicated to the songs. So far we are supporting other band or we play festivals, so we cannot bring a big production, but we have pedestrals, we have backdrops and roll-ups, we have our war-hammer and an over-the-top stage acting. No one will be disappointed, we love what we do. And you cannot resist the Aderlass when we play it live!

7.Do you have any touring or show plans for the future?

Titan Fox: Absolutely. We want to play as many shows as possible and we would love to support bigger bands on regular tours and also play festivals. We are a Heavy Metal band and Heavy Metal is meant to be played live. You have to see the sweat and you have to feel the power and the passion. We want to spread the message of the King as far as possible and want to play to as many people as possible. We will give 100% no matter how many people there are – 80 or 8000, they all deserve our music!

8.On a worldwide level how has the feedback been to your music by fans of heavy and power metal?

Titan Fox: The first reviews for the album are coming in and so far they all have been at least 8/10 points! We have been played on web-radios and real radio and "Kingdom Of The Hammer King" have been chosen "song of the week" several times. So far it could not be better!

9.Are any of the band members currently involved with any other bands or musical projects these days?

Titan Fox: We are all 100% focused on Hammer King. So whenever anyone plays with other people or friends it can only happen when the King allows it. None of us will ever turn down any Hammer King activity for any other project. Hammer King makes us confident and proud, we want to give all we have for Hammer King. I personally have never played in a better band, I am very proud of it.

Titan Fox: Only the King knows! Wherever we may go musically, we always want to keep it clear and straight. Our music is meant to be played live and we want the audience to get into our songs – they have to sing for the King! – so the songs must be very much on the spot. That's what we want to keep doing, no matter what.

Titan Fox: Of course the King is influenced by the history of Heavy Metal, by bands like Iron Maiden, Judas Priest, also by Wishbone Ash and of course by Pfalzgraf Luitpold – a true inspiration. We play the music given by the Hammer King.

Titan Fox: Personally I am not really interested in all too many things outside of music. I always write lyrics, write music, play the guitar or sing. I like to get strength and inspiration from nature. I love vintage movies and I am passionate with food, especially garlic and cheese - that's why we have tried to get a "maître du fromage" for our concerts. But honestly, music has always been what really fills my life as much as possible and I don't need much other than music.

Titan Fox: The King sends his gratitude for your support! We need the support from everybody to spread the word. The Heavy Metal scene is the best following in the world, there are no fans more passionate than in Heavy Metal. We will give our very best to deserve our place in this great scene.
We want to thank our amazing label, agency and the staff behind Hammer King for their great work.

Posted by OccultBlackMetal at 12:47 PM