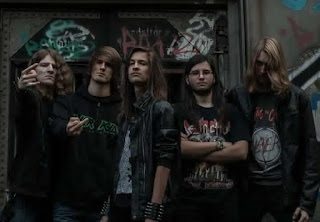 1.Can you give us an update on what is going on with the band these days?
1. We just played a couple of shows with our session bassist and now we're looking for a good studio to record our full lenght very soon. Also we're looking for new gigs to play.

2.So far you have released a demo and an ep, how would you describe the musical sound that is present on both of the recordings and also how do they differ from each other?

2. First of all the demo was more like trying out stuff, also the sound isn't very professional, but still it was our first recording experience. When you listen to the EP, it's a big change and we've developed. On the "Call To War" EP there's a lot aggression and anger, the sound is better, even though we were still not that happy with it, and it's just pure teutonic thrash! Also it was very cool to record that one so we think this EP shows pretty much what we stand for. But still, it's been a time since we recorded that and we developed since then, so the full lenght is going to be even better!

3.What are some of the lyrical topics and subjects the band explores with the music?
3. In our lyrics we criticize politics and everything that's wrong with society. Actually, we don't even have to search for a topic, the current situation gives us the aggression automatically.

4.What is the meaning and inspiration behind the name 'Warfield'?
4. Acutally, we just took it from the Slayer-War at the Warfield DVD. But the name also fits into what we're doing, when we play live and when you look at our lyrics, it's pretty much a Warfield because we get angry when we see the capitalistic society and the politics' actions. And of course it fits because of the mosh pits.

5.What are some of the best shows that the band has played over the years and also how would you describe your stage performance?
5. One of our best shows was the release-show for our EP. We were happy that it finally came out and the people at the show were pretty crazy too. Also a couple of the best shows for us have been the ones we did over the last weeks and months with our session bassist, for example the shows at the Newcomer Metalnight in Tübingen or at the Taunus Metal Festival, what was one of the biggest stages we've played on so far. Also there were a lot of awesome bands that played with us. Our stage performance is exactly what you expect from an old school thrash band, it's wild, aggressive and there are a lot of hair flying in the pit.

6.Do you have any touring or show plans for the future?
6. We're actually looking for gigs all the time. Now we're searching a studio to record out first album and afterwards we're playing shows again.

8.On a worldwide level how has the feedback been to your music by fans of thrash metal?
8. The worldwide feedback has been very good so far. It's just awesome to see that people like what we're doing because we ourselves love it as well! We get great feedbacks from different countries and that's really fuckin' amazing!

9.Are any of the band members also involved with any other bands or musical projects these days?
9. Yes, actually two of our members. Our drummer Dominik helps out in another band called Redgrin who play death metal and our session bassist Marc plays guitar for the black-thrashers Nekkromaniac. We just can't get enough.

10.When can we expect new music and also where do you see the band heading into musically during the future?
10. We planning to release our full lenght next year and it's going to be full speed, aggressive and dirty teutonic thrash metal that will kick all posers out!

11.What are some of the bands or musical styles that have had an influence on your music and also what are you listening to nowadays?
11. Our influences are of course the german thrash legends like for example Sodom, but also the bay area bands like Exodus, Testament or Slayer. Also, we're influenced by new bands like Suicidal Angels or Legion of the Damned. Generally, we listen to a lot of different stuff, also to bands like Immortal, Midnight, Exciter, Razor, Enforcer or the german Wifebeater just to mention a few.

12.What are some of your non musical interests?
12. Football and beer drinking!

13.Before we wrap up this interview, d you have any final words or thoughts?

13. If you like some old school teutonic thrash to go fuckin' wild, check us out! Thanks for your support and always keep thinking for yourselves! New album will be out soon!

Posted by OccultBlackMetal at 1:04 PM