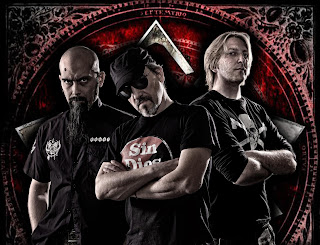 Due to the fact that the band has recently re-lined up, we are practicing a lot on the songs so to be ready to play around in the next Autumn. We all have an occupation outside music except for the drummer that is a full-time musician, then we can dedicate to music not all the time we would like to. I am dedicating myself to reviews and interviews, and we are preparing a “best of”  to be released possibly next year.


2.In April you had released a new album, how would you describe the musical sound that is presented on the recording and also how does it differ from the stuff you have released in the past?

Well, this is the Braindamage's cd that took less time to be conceived and that has had the lesser modifications along its recording. It is a kind of straight forwardish attitude, which is what we needed, that could be felt along the cd. I mean, we did not do it in a rush because we were hurrying to have a cd out, it is a simple constatation of efficiency in short time. We normally used to spent gigantic portions of time to create and record: this time we did not and is a kind of relief. Moreover, it is definitely one of the best production ever, for us, thong that we absolutely needed.


3.This is the first album to be released in 7 years, can you tell us a little bit more about what has been going on during that time span?

After releasing The Impostor we tried to promote the cd and play alive. Then we had a change in the line up that caused us a stop. We started again with Gee Anzalone (Now with Dragonforce) an Alex Mischinger (Scream Three Days). Gee was contacted by Dragonforce after a couple of years and we cheered him as he went playing in the championship that counts. He's a good guy and a great musician and he deserved to go on a top notch band. Then we stopped again until we decided, last July, to compose and release the next album. Cosimo from Mater Dea asked us to participate and we merrily agreed...

All of our music is based on a concept I built and elaborated from the and of the 70's beginning of the 80's when I was a teenager and playing metal was the best vector to tell the story I wanted to tell. War, god, History manipulated, madness, conspiracy and misguided plans, traitors believing to be saviours and saviours turning out being invaders. The struggle of mankind to get rid of religions, just to fall in the hands of worse chains, mysterious empresses, liars, nuclear warheads and parallel worlds. I am trying since years to finish a book called Kahlenberg, the Red Empress and other tales, which contains all Braindamage's concepts, and some day publish it: I hope that day will eventually come...


5.What is the meaning and inspiration behind the name 'Braindamage'?
There are actually two: the first is bound with the famous Pink Floyd's song, some of the lyrics are linked with the concept and the second is that my nephew, Francesco, that was born two years before we formed the band, has a serious cerebral damage and I thought it was the best way to demonstrate how important he was to me.


6.The band has been around since 1988, what is it that keeps you motivated to keep going on after all of these years?

The motivation is that music (metal music, of course) is still a beautiful girl to be courted and we shall never stop doing it. It's not for the little money nor the ridicolous glory, it is just because playing is like breathing fresh air and the spirit is yet the same as '30 years ago. We are free to say and play what we want and until this is gong to be fun we well keep on doing it.

The best two in absolute are in London, at the Astoria, supporting Killing Joke in '91 ate the end of an epic tour and the second supporting Voivod here in Italy, fantastic people for fantastic times.

8.Do you have any touring or show plans for the new album?

As previously said, we are preparing for  next Autumn something like a good promotion here and abroad, so far is a little early to talk about but we shall keep those who are interested on us informed.

We are but a niche band which is corageously struggling to obtain a small space into a world that is now bigger than it was when we started in 1988. We are having our good moments as well as some disillusions, but so far we are well received and we got some die-hard followers since years.


10.Are any of the band members also involved with any other bands or musical projects these days?

Cosimo plays drums with Mater Dea, a good folk-metal band, Mischinger plays with me in Scream Three Days, a melodic death-metal band and Gigi shares with me another project called Kilauea.

12.Where do you see the band heading into musically during the future?

To the extreme, as always, towards the core of the hurricane.


13.What are some of the bands or musical styles that have had an influence on your newer music and also what are you listening to nowadays?
Killing Joke and Voivod as well as Deathrow, to name some, but we love thinking that our stuff is something that has had is source from us and will evolve from a personal point of view. It sounds possibly arrogant but it is honest.


14.What are some of your non musical interests?

I am a teacher at primary school and I have worked in education since '95. I like drawing, reading and writing short essays about warfare in the XVII-XVIII centuries.
Gigi is a fantastic carpenter and likes fitness. Cosimo is a bulimic reader and one of the most intelligent thinkers I've ever met. Alessandro is a great person, involved in many things as well as being great at his profession outside music.


15.Before we wrap up this interview, do you have any final words or thoughts?

I would like to say something about our worry for one of the two candidates for next Presidential Election in USA, but maybe this is not the right place... (You can erase this if you want to or if it sounded inappropriate!)
I thank you for hosting us on your pages, keep up the great work!

Posted by OccultBlackMetal at 10:05 AM