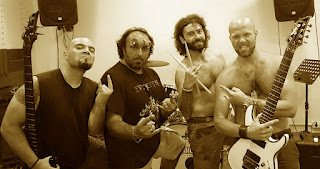 
Can you give us an update on what is going on with the band these days?
Well, we are planning some shows for the summer time and writing something for the new album. At the moment we have a show scheduled for the 20th of august here in Italy along with Exodus, but others gig out of Italy are planned for the autumn.

2.You have a new ep coming out in May, how would you describe the musical sound that is presented on the recording and also how does it differ from the stuff you have released in the past?
Uhm, I think there is no doubt when I define our music as Thrash Metal. We got a heaviest sound, violent and very recognizable. We are a Thrash Metal band and we are very proud of it. In the past several things were different, but our roots have always been into Thrash Metal.

3.In the beginning the band was in more of a progressive power/thrash metal direction, while the current material is in the more extreme style of thrash, what was the decision behind going into a heavier musical direction?
It was a natural choice, in fact as I told you before our roots have always been into Thrash Metal. Fuoco Fatuo was another band extremely different  from Eversin. The idea behind the music and the band itself was different. The kind of music we used to play when we were Fuco Fatuo was very influenced by band that, today, for us, belong to the past and to a short period of our musical life. Fortunately that stupid period is dead and gone.

4.What are some of the lyrical topics and subjects the band explores with the current music?
I only talk of what surrounds me. I also love to talk about historical happenings, in fact all the lyrics on Tears on the Face of God, our second album, were based on WW2. “Trinity: the Annihilation” is instead based on the first atomic test called “Trinity” made by the USA in 1945.

5.Originally the band was known as 'Fuoco Fatuo' but changed the name, what was the cause of the name change and also the meaning and inspiration behind the name 'Eversin'?
Well, Fvoco Fatvo was a very nice moniker but it was in Italian and  unfortunately it was hard to remember for the most of people. So along with our label we decide to change into Eversin. Eversin expresses fully what we think about the human being and about his nature of eternal sinner.

6.What are some of the best shows that the band has played over the years and also how would you describe your stage performance?
I will always remember the gigs with Death Angel, Destruction and Carcass...but at the same time I love to remember our experience on the Rock Off stage in Istanbul with Megadeth, Korn and many others...How can I describe our live shows...uhm...Can you figure out to stand in front a tank? It’s the same thing.

7.Do you have any touring or show plans for the future?
Sure we have...as I told you before, we will share the stage with the mighty Exodus her in Italy the next August, then in September in France to be part of the first edition of Nemossos Fest...At the moment we have some more show to announce, but we have to wait a little bit yet.

8.On the ep you had done a cover of Sepultura's "Refuse/Resist", what was the decision behind doing your own version of this song?
The only reasons is because we fucking love the whole Chaos A.D. album. Refuse/Resist is one of the track which has more influenced us...

10.Where do you see the band heading into musically during the future?
Well, we think that to evolve is one of the most important thing for a band. We are taking the last album as a starting point to write new stuff, but we are conscious that we don’t want to realize a copy of it. The new record shall be a further step. We shall write a new page for our music. We are a Thrash Metal band, and we are proud of it, but we feel the need to evolve and take our music on another level.

11.What are some of the bands or musical styles that have had an influence on your newer music and also what are you listening to nowadays?
We all love Thrash Metal, so Metallica, Slayer, Megadeth, Testament, Exodus and Grip Inc. are always on...The other guys of the band love to listen other kind of music sometimes...For example Gabriele (guitarist) loves Jazz, Danilo (drummer) Italian Rock and Angelo (voice) some of Opera...Well, I don’t fucking care of other kind of music, I’m close minded and I’m proud of it, ahahaha...For me Metal and Metal only.

12.What are some of your non musical interests?
I play football and go to gym for body building. Honestly I don’t know about the other guys...Uhm, Angelo loves to collect weapons...yes, and Gabriele loves bike. Regarding Danilo...shit, I really don’t know!!!

13.Before we wrap up this interview, do you have any final words or thoughts?
Thanks for your support and for the space you are giving to Eversin. One last thought? THRASH ‘TILL DEATH!!!
That’s all.

Posted by OccultBlackMetal at 12:08 AM