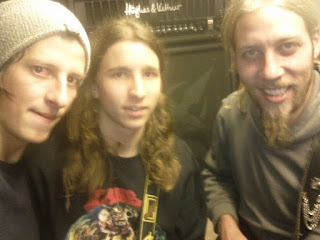 We had a few line up changes since the release of „Overdrive“, but now we have a solid and awesome line up and we are almost done with the songwriting for our next record.

2.A year ago you had released a new album, how would you describe the musical sound that is presented on the recording and also how does it differ from the stuff you have released in the past?

I think there are a few more other influences or genres, which you can find in our music on „Overdrive“. On the other hand for example the first EP „Raging Nightmare“ is really straight forward Thrash-Metal.
After all we never forced a special direction. We just wrote songs, that we liked. Over the years we formed the sound we play today.

The lyrics always have something to do with stuff we really want to sing about, so there are no fixed lyrical topics or subjects. But I can say, that the statement „Overdrive right into insanity“ builds the quintessence for the lyrics of our newer stuff.

4.Originally the band was known as 'Disaster Area', what was the cause of the name change and also the meaning and inspiration behind the name 'Running Death'?

There existed a „Banana – Rock“ - Band with the same name, whatever this is :P
Anyway, to avoid issues with them we got to change our name.
When we came up with the name „Running Death“ no one of us put any special meaning in the name. For me for example the name just sounded very metal and thats why I liked it back then. And until this day I think, that Running Death is a great and a memorable name for a Metalband.

For me personally the biggest moments on stage were the gigs with „Amorphis“, „Suicidal Angels“ and „Hirax“, but honestly everyone of us enjoys every gig!
I think our stage performance is great, especially Simon (Vocals, Guitar) does some memorable stuff on stage. So go check it out!

We want to be on the road as often as possible, but as I already said we had problems with line up changes and things like that. And also we're writing on our next album, so we didn't played that much the last months. But I think this will be changed the following months.

7.The last album was released on Punishment 18 Records', can you tell us a little bit more about this label?

It's an independent  label in the middle of Italy. A label especially can help you with the promotion and distribution of your music and can reach people, who you never could reach yourself.
8.On a worldwide level how has the feedback been to your music by fans of thrash metal?

I think over all the reaction especially for Overdrive is really good. Some of the early Running Death fans recognized, that the stuff on the Album is more progy than the songs of the earlier releases.
If you look at the reviews, you also can see, that the reactions are over all positive. The only thing some of the listeners don't like are the vocals, what I personally can not understand.

9.Are any of the band members also involved with any other bands or musical
projects these days?

Yes, Simon plays in a Heavy Metal band called „Eisenhauer“ and I am involved with musical projects at university as part of my studies.

This is really difficult to answer. The material for the new album is by far the best stuff, we have ever written! It's hard to evaluate if there is a major difference or some kind of changes. Over all it will be a little different. Otherwise it would be boring, if we would do the same record twice ;)

I would say our main musical influences are bands like Megadeth, Annihilator, Rage or Testament. But each member of the band has his own influences. For me for example Pantera is really important, because the drumming of Vinnie Paul forced me to work on my tightness and groove everytime. Nowadays everyone of us also likes and listens to other music besides of metal.

For example our Bass-player Max is really into gaming, Simon likes to be in the nature and everyone of us likes good and especially funny movies. I am also a fan of NBA-Basketball, especially of the Golden State Warriors.

Thank you for the Interview and a big „Prost“ to everyone at ExtremeUnderground and all the fans!

Posted by OccultBlackMetal at 8:01 AM