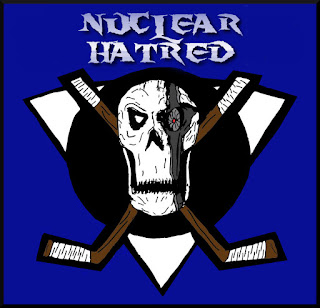 Since then we've been booking a few shows, trying to get on some fests next year and we started writing our second album after some newfound ammo that prompted the name change.

It's our debut and it's basically a culmination of everything we've done to this point – even going so far as to re-record the songs on the horrible “Blood on the Ice” demo. It is by far the best sounding thing we've ever put out and I'd say it sonically captures the spirit of those old-school DIY Hardcore/Thrash bands of the 80's.

It varies from politics and the twisted shape of the world today to comic books and horror movies. There's something for everyone unless you're a PC person/social justice warrior (they don't seem to like anything).

4.Originally the band was known as Zamboni, what was cause of the name change and also the meaning and inspiration behind the name 'Nuclear Hatred'?

Exactly a week to the day we released the album we were sent a cease and desist letter from the Frank J. Zamboni & co. corporation saying we had to change our name or there would be legal action taken. Because we don't have the time, money and lawyers they do, we didn't have a choice so we pretty much changed the name on the fly by picking a random song title from the album. There wasn't any thought given to it, we just scrambled to get it done as soon as possible – which meant pulling everything from iTunes, Amazon, CD Baby, etc. and re-uploading it with new artwork. The same went for all our social media accounts. If we really thought it through and took the time we'd probably have a better name but whatever happened happened. It was a pain in the ass but we're over it now and album two is going to be very angry.

I think the best shows we've ever played have been the Thrash Bash BBQ shows we put on every year. The energy's great and all of our friends are there having a blast and we're just doing our thing. I'd say our performance is unorthodox, goofy and fun. If you don't get it you don't get it but that's what music is.

We're playing a basement show in Staten Island this Saturday and we'll be at Gussy's in Astoria, Queens on June 4th. After that, we get down to playing our fifth and final Thrash Bash BBQ on July 30 and who knows where we'll be in the months following that. We'd like to do some short tours and some festivals but we'll have to see where things take us.

We're going to start looking into distribution because all of our music is digital at the moment and we don't want hundreds of CD's, cassettes and Vinyls lying around our houses forever so if there's a place that could produce these physical copies for us and sell them for a percentage that'd be awesome. Otherwise, we're not that into being on a standard label right now. It'd be cool to say we're on an actual label but that doesn't seem like the next logical step at the moment.

8.On a worldwide level how has the feedback been to your music by fans of thrash and hardcore?

So far pretty positive, which surprises me. I didn't think people would get it considering how overproduced things are now and the direction we went but people seem to like it so bully for them, I guess.

I think we could get a little darker, a little heavier and a little more technical but otherwise I don't our style changing too much.

10.What are some of the bands or musical styles that have had an influence on your newer music and also what are you listening to nowadays?

It's probably a lot of the same bands like D.R.I., The Ramones and Carnivore but there's definitely a lot of MDC, classic rock and some doom getting sloshed around the mixing bowl. We also love old-school rap so lyrically it's getting a little more complex. Lately I've been listening to Moon Tooth, The Fatback Band and Condition Critical while Rob's been getting into Yes.

I like working out, podcasting, retro gaming and watching WWE. I also like comic books, painting and hockey but I haven't been watching the Stanley Cup since the Rangers and Blackhawks got eliminated in the first round. I thought Chicago was going to win again for sure but the way the Blues played, I wouldn't be surprised if they went all the way and won it.

Posted by OccultBlackMetal at 5:15 AM