1.Can you give us an update on what is going on with the band these days?
VG: Yes, of course.  We are excited these days. Our debut is on sale newly and many positive feedbacks and criticisms ensue nowadays. That gives us morale and extra power.

2.Recently you have released a new album, can you tell us a little bit more about the musical direction of the new recording and also how does it differ from your past releases?
VG: This is our first full-length record. Our initial purpose by forming the band was playing some heavy-thrash stuff in the school years. Over the years, power metal, traditional metal and heavy/doom began to enter into our style. We aimed a musical taste which thrash metal is placed at the core and it’s covered by power metal and traditional heavy metal . All these should have been served in a cold and modern sound & mixage. And we think that we accomplished this musical goal in “Timeless Warfare”

3.The band has been around for 10 years but so far there has only been one demo, single and album, can you tell us a little bit more about the gap between releases?
VG: We formed the band in 2005 and released the demo “Premier Fury” in 2006. Those times, we were always on stages. We gave numerous concerts and worked hard to develop our stage performance. Those days were amazing because we love to be on stage. Also, the most important factor about that time gap was member replacements. We couldn’t find our companions easily.

4.Can you tell us a little bit more about the lyrical topics and subjects the band explores with the new album?
VG: We can’t say that “Timeless Warfare” is composed in a single concept. Every song has a different story. However, maybe not so directly but, most of the tracks are telling the situation of an ongoing state of war or the song’s story takes place in such an environment. Generally, we like to use metaphorical expressions and fantasy-based, indirectly  story-tellings. Main themes can be mentioned like these; “wars for greed”, “worshipping power&oppression”and “psychological&social situations/problems” Of course, the album wants to give other deeper messages which should be caught by listeners.

5.One of the songs was written in German, what was the decision behind using this language on one of the tracks?
Emre (Vocals): I love the German language and its phonetic character in music. I always try to learn more and wanna improve my German. There are poetries in German language written by me. We decided to melodize one of them and put into the album. So, Schaukelstuhl and its story has been shared with people in this manner. We’re planning to continue composing German songs for our future albums.

6.What is the meaning and inspiration behind the name ;Vengeful ghoul'?
Emre (Vocals): I was playing in another oldschool thrash metal band, called “ElectrocutE” and “Vengeful Ghoul” was one of the early songs written by me for ElectrocutE. It was the story of a man who is betrayed and murdered by his close friends and seeks revenge after being sent back to the world as a ghoul. In this new group which Senem and I formed, we were writing similar stories about vengeance. We started to call our new band “Vengeful Ghoul”. We loved the name, and so it stayed.

7.What are some of the best shows that the band has played over the years and also how would you describe your stage performance?
VG: We used to play in open-air university festivals and we can say that the most entertaining ones are those shows. Students are fervent as we are in the stage. We can describe our stage performance with one word; “dynamic”  . It’s a cliche but we live the sound on stage. We want to move and behave distinctively while playing regarding to the song and its own story which we perform that moment. We like to perform theatrical vocals and dynamic acts on stages. Of course, our behaviours are always triggered by the generous demeanor of audience.

8.Do you have any touring or show plans for the future?
VG: Yes. In June 2014, we will support Dutch heavy metallers “Lord Volture” for some shows taking place in Holland and France. We want touring as much as we can and spreading our words, stories and feelings to people worldwide.

9.Currently you are unsigned, are you looking for a label or have received any interest?
VG: Yes we are unsigned and we’re still looking for a label. Some companies were interested in our music after we sent the promo packages, but unfortunately we couldn’t make a deal. We recorded demo versions of the second album and even started to arrange third album’s tracks. We have satisfactory materials for our future albums. We hope that we sign a label and keep on releasing new  works.

10.On a worldwide level how has the feedback been to your music by fans of power and thrash metal?
VG: Absolute good. Many worldwide compliments and appreciations are coming via e-mail & messages. Especially, Russian and German listeners are showing a different interest in our album. They’re making exact and stunning analysis for our music. Intellectual comments make us pretty glad. It shows that the listener could get the variety of metal styles in our debut and that was exactly what we wanted.

11.Where do you see the band heading into musically during the future?
VG: We shouldn’t talk big, but we won’t change our style. Mixing classic heavy and power metal with modern thrash metal touches is always our musical aim and what we like to do.

12.What are some bands or musical styles that have had an influence on your music and also what are you listening to nowadays?
VG: Of course, there are a lot of artists and bands which put an influence on our music. If we start to write, lines will not fit on the page J But we can say that people can like our music if they are a fan of these bands below;
- Nevermore
- Jag Panzer
- Agent Steel
- Vicious Rumors
- Helstar
- Kreator
- Primal Fear
- Brainstorm
Nowadays we are listening to;
- CONQUERING DYSTOPIA – Conquering Dystopia
- ONSLAUGHT – VI
- SAXON – Sacrifice
- JORN – Traveller
- BEHEMOTH – The Satanist

14.Before we wrap up this interview do you have any final words or thoughts?
VG: First of all, we would like to thank you for this interview. We are walking through our dream currently and we believe that it will become a reality when we share our music with more people. Heavy cheers to everyone in the metal circle !! 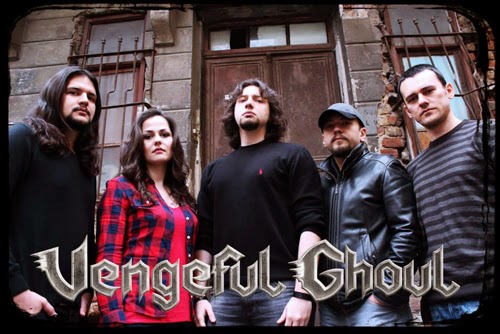 Posted by OccultBlackMetal at 11:46 AM