1.For those that have never heard of you before, can you tell us a little bit about the band?
Hi , first of all, thanks for the interview!
I’m Kev, lead guitar player and the second vocalist in Arising Fear.
Arising Fear is a young four-headed metal band from southern germany. The Band was formed back in 2008 when Alex (Leadvocals/Guitar), Tom(Bass) and Tobi (Drums) quit their old skate-punk band which has been around since 2005 and were looking for a new guitar player in Augsburg, Bavaria. With me joining the guys it soon was pretty clear that the musical direction of Arising Fear would become a lot faster and heavier than the stuff they have been doing before.  Since then we practiced and played lots of live shows until we recorded our first debut EP in 2009. We just finished the recordings for our debut album “Beyond Betrayal” which will be released on march 29, 2014.

2. Recently you have released a new album, how would you describe the musical direction of the new recording and also how does it differ from the ep you released 5 years ago?
The music on our new record can be described as a mixture of classical heavy metal, thrash and even elements of the metalcore genre. Besides that, we set great value upon melodic songwriting and aggressive lyrics combined with an occasional acoustic attitude. It’s very important to us that every song has got a different vibe and feeling. Everybody can sit around and shred something but it’s more meaningful to us to just write a good song.
The writing process of our new record has definitely evolved a lot compared to the ep we released back in 2009. We arranged the songs more compactly and slip in all the experiences we gained over the years to make them work perfectly in our live shows.

3.The band has been around since 2005 and so far there has only been one album and ep, can you tell us a little bit more about the gap between releases?
As I already said, Arising Fear as a whole has been around since late 2008 after my fellow band
mates made the decision to dedicate their lifes to metal music and letting me join the band. After we released our selftitled EP we just wanted to gain as much live experience we could and set all our focus on writing the best debut record possible. Of course there also were different projects each of us joined in to develop our musical background.

4.What are some of the lyrical topics and subjects the band explores with the music?
The lyrical topics on “Beyond Betrayal” range from approaching bad personal experiences each band member went through in the past few years and how to get over it to topics about standing your ground, doing your own thing and just not taking certain things too seriously. This is what metal as a lifestyle is all about for us. We always want to express a certain kind of message in our songs to give our fans something they can relate to and identify themselves with.


5.What is the meaning and inspiration behind the name 'Arising Fear'?
At first we were just looking for a catchy metal band name which immediately settles in your memory, but everybody experienced different kinds of fear during their lifes and I’m sure that people can relate to a band name which describes that particular feeling. There’s always a huge heap of adrenaline rushing through your body when you are scared and this is exactly what we want to achieve when you are playing our debut record on your home stereo or attending an Arising Fear live show.

6.What are some of the best shows that the band has played over the years and also how would you describe your stage performance?
We played  a lot of intense shows including very well known german bands like Emil Bulls or Tenside . It’s an indescribable experience to play your music in front of a big crowd that sings along with you and goes off completely. We emphasize a strong and powerful show with energetic movement all the time!

7.Do you have any touring or show plans for the future?
We are going to play as much live shows as possible and heading out for shows in germany within the next months. At the moment we are proceeding with several booking agencies to promote our new record.

8.Currently you are unsigned, are you looking for a label or have received any interest?
Of course we are looking for a record deal! We hope that our debut record attracts enough notice to gain a record company’s  attention and  we’ll give it all to accomplish that goal.

9.On a worldwide level how has the feedback been to your music by fans of thrash metal?
Considered that we are not a thrash band in the classical way like Exodus, Overkill  etc. the feedback was just awesome! It’s always an honor to get positive feedback from people who are listening to your music  and dig it.

10.Where do you see the band heading into musically during the future?
We are already working on new songs for our next record. And the material definitely gets a bit more catchy due to the reason that we are going to emphasize the vocals a lot more than we did on beyond betrayal . The guitar parts will become more diversified and there will be more melody within the songs! We will try to hit the studio again in early 2015!

11.What are some bands or musical styles that have had an influence on your music and also what are you listening to nowadays?
I think it’s always important to listen to a lot of different styles of music, whether it’s Jazz, Hardrock or Black Metal. We have a lot of influences and everyone likes different bands.
We don’t want to copy somebody’s music and we always want to create a unique sound with our band. But as our favourite’s I definitely gotta go with bands like Pantera, Machine Head and Metallica but also “newer” Bands like As I lay Dying or Trivium.

12.What are some of your non musical interests?
First of all, we all like to just hang out with our friends and have a good time. I am very interested in reading books about the history of germany and the rest of Europe, Alex and Tobi are into football and like to work out while Tom is into sports and snowboarding.

13.Before we wrap up this interview, do you have any final words or thoughts?
Big THANK YOU for the great review and interview! And to the readers: If you are into metal, support your local bands, attend their live shows and buy their records! There are so many great bands out there which deserve to get more attention.
Check out our debut Album “Beyond Betrayal”! It would mean the world to us! 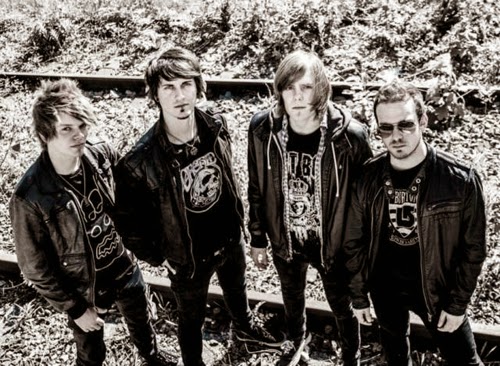 Posted by OccultBlackMetal at 2:12 PM