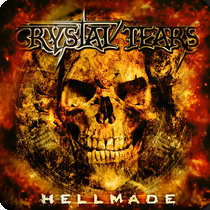 With  this  album  Crystal  Tears  combine  both  the  old  school  and  modern  day  forms  of  power  metal  together  along  with  a  great  balance  between  heaviness  and  melodies  which  sounds  even  more  powerful  with  a  very  professional  sounding  production  and  lyrics  that  cover  life  and  fantasy  themes.