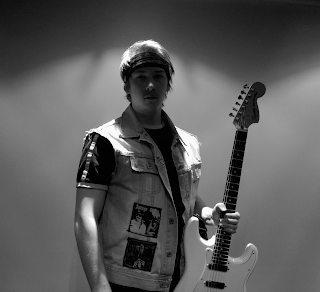 1. Can you give us an update on what is going on with the musical project these days?

My focus has been mainly on the upcoming release of the Yeth Hound EP but I’ve had some spare time to write new songs. There’s actually a bunch of new songs waiting to be recorded but before I’ll start recording those, I’ll have to learn how to improve the quality of the sound, so I’m trying to study that field. Anyway, the project is alive and doing well. New great songs are being born and the date of the releasing of the EP is near.

2. In January you had released a new ep,, how would you describe the musical sound that is presented on the recording and also how does it differ from the stuff you have released in the past?

The roots of the sound are clearly 30 some years in the past but it’s presented in the way I like it. Nowadays the standards of the production and the expected sound of the music are somehow screwed up in my opinion, so some would call the sound that’s presented on the EP a bit amateurish. I call it humane. Though I admit that the mix is a bit off and there are things I will do differently in the future, but still it’s important for me to have my own sound. The actual song material on the EP is more or less the same as it is on the last year’s demo but the post-processing is much better on the new EP. In the end it’s just Heavy Metal brought to you in the way that you know that it’s a man-made music.

3. What are some of the lyrical topics and subjects you explore with your newer music?

Everyone has to decide what the lyrics are about for themselves. Sometimes they have intentionally two meanings and sometimes there’s really no meaning at all. I rarely decide that I want to make a song about this or that. Usually I just come up with a verse or a chorus, or maybe even just a single word and start to build the theme around that.

4. What is the meaning and inspiration behind the name 'Tyfon's Doom"?

That I don’t know. We were planning some kind of metal project with my friend a few years ago and he came up with the name “Tyfon Doom”. The project was buried before it was really even born, so when I was about to release the demo last year I had to think about the name for the project. I happened to remember that name so I just added the “s” as I thought it would need and started to use it. Also, I thought about using the English word “Typhon” but it didn’t look that cool even though now somebody might say that there’s a typo in the band’s name.

5. With this project you record everything by yourself, are you open to working with other musicians or do you prefer to work solo?

I’m working solo because it’s possible, it’s the easiest way for me, and also it’s currently the only option. Finding some bandmates probably wouldn’t be too difficult but I’m not too interested in putting any effort into that. I believe I could work with other musicians but I’m not sure if I could co-write songs with someone else as I don’t want anyone to meddle with my work. However, I haven’t even tried so I can’t really say.

6. Your musical style is heavily rooted in an early 80's metal style, do you feel the more traditional forms of metal are making a comeback these days?

Well, this kind of music isn’t the most radio-friendly music and it’s not so easy to make money out of traditional heavy metal, so I believe that if there is going to be some kind of comeback, it’s still in a small scale. It’s very unfortunate but there are never going to be new (old) Judas Priest or Iron Maiden. Hopefully I’m wrong though…

But we don’t need to care about that, the current situation of traditional metal looks awesome! There are some new bands emerging all the time and playing heavy metal just as well as they did in 80’s, and as long as there are labels like Cruz Del Sur and Gates of Hell, everything will be fine.

7. Recently 'Gates of hell' re-issued both of your releases onto one album, are you happy with the support that they have given you so far?

I’m more than happy with the support they’ve given! They’ve been really professional and helpful throughout the whole process. They are doing a great favor for the world with their work.

8. On a worldwide level how has the feedback been to your music by fans of metal?

The feedback have been very positive! Almost everyone who have given their comment about the EP have been liking it. The rest just probably haven’t said anything. Also, I’m not counting the amount of reviews but there are maybe about ten or more of them. The worst rating given to the EP have been 6 out of 10, as far as I know, and the best have been 10 out of 10 and the rest have been somewhere between those, so I just have to feel that I’ve nailed it.

9. When can we expect a full length album and also where do you see yourself heading into as a musician in the future?

I haven’t covered my walls with any detailed plans yet but a full length album is to be expected probably next year. I have some songs ready that I definitely want to have on an album. I don’t have any schedule with the future releases so I’m just going to write songs until I have enough very good material. Honestly, I don’t really want to become a professional musician. The quality of the music is better when it’s just a carefree passion. Right now I just want to record albums without worries.

10. What are some of the bands or musical styles that have had an influence on your newer music and also what are you listening to nowadays?

Surprisingly my main influences are 70’s and 80’s traditional metal bands! That can’t be denied like some bands do when they say that their influences are purely in classical music, bullshit. I mainly listen to music made in these decades but of course I do listen to older and newer music also. Recently I’ve been listening progressive rock, probably too much. Some of that music is very strange stuff, for example right now I’m listening to the Close to the Edge LP by Yes. Anyway, I can’t say if this really has any effect on my compositions. But the musical styles that I don’t listen are commercial pop-music and generally everything that’s been made completely with computers.

Well, I’m currently studying construction engineering at the university, so I have to admit that I’m pretty interested in that stuff. Also I like to both participate and watch different sports. Furthermore, I like to spend time watching TV series and documentaries.

I just want to say that I’m very thankful for everyone who have been interested in this project! Without you people I wouldn’t have the interest of releasing anything and thus trying to advance with this project.


www.facebook.com/tyfonsdoom
Posted by OccultBlackMetal at 10:21 AM