I Am Noah Interview 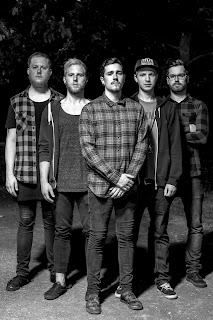 1.    For those that have never heard of you before, can you tell us a little bit about the band.

We are I AM NOAH a band from Trier/Germany. Five young dudes doing their best to present fresh metalcore tunes to the world! We love what we do and want to share our energy with the audience, trying to convey power and fun through our performance. Fast riffing, hard hitting breakdowns and powerful sing-alongs combined in one set - this is what we stand for when you talk about our music! Concerning our lyrics and image we try to build a free world for feelings and emotions. As you can imagine NOAH is not just a name. He stands for resistance, safety, freedom and equality! Everyone can identify with this attitude, so we invite everyone to be part of a movement - part of his own movement - to feel free and safe in his surroundings.

2. Recently you have released your first album, how would you describe the musical sound that is presented on recording?

The Verdict comes with clear but bashing sound that convinces with a structured mixing. Combined with a well arranged songwriting we built a wall of metalcore that is filled with tricky riffs, straight drums and vocals which try to express the feelings of a man called NOAH.

3. The band formed out of the ashes of CHIMALBA, what was the decision behind breaking up your old band and start this one?

As we finished the songwriting for The Verdict we took a look on the whole process and result: This is something different! We took the chance to restart. CHIMALBA has been our baby since 2011 but for now there were too much things that have happened to us. Member changes, image, design and so on. We decided to present this album with something new.

The lyrics are about criticism, pain, hate, suffer and everything humans can bring up in bad manner. It is not even the religious background but the truth. If you open your eyes and look beyond things that are happening, you will explore what it is all about. It is not what they tell us on TV or what you can read on the internet, you have to go there and see what is going on. Our world is damaged, we are damaged. “YOU GAVE YOUR SOUL TO MONEY, FORCE AND GREED“ (from The Verdict) - this sums up what we are living for.

5. What is the meaning and inspiration behind the name I AM NOAH?

We took this fictional character NOAH as the savior of the world. But not as a person, we have to decide for ourselves how much we want to do. You can be that person, always accepting whether good or bad, and that person who gives everything to put things in the right way. So it is left to you how much you give and how much you earn. Our world is drowning, build your own arch and choose your way to finish this story.

6. What are some of the best shows that the band has played so far, and also how would you describe your stage performance?

The best show so far… hard to pick one. It is not the biggest crowd or best sound what makes a show "good." We enter the stage, every time ready to destroy the place.

We´re going to play a few festival this summer. Furthermore, we´re already planning some shows / tours in fall this year. You can see all our tour dates on our Facebook profile. www.facebook.com/iamnoahofficial

8. On a worldwide level, how has the feedback been to your music by the fans of metalcore?

We are very satisfied with the feedback we got till now. Our name and sound got mentioned in relation to bigger bands in the business which we love listening to (for example: Architects, August Burns Red, Northlane). This means a lot to us and brought us even more energy for writing our next record.

That´s hard to say, because we haven´t finished our current songwriting procedure, yet. We get our inspiration from new and old, hard and soft music. So everything is possible. But it is going to be heavy for sure.

10. What are some of the bands musical styles that have had an influence on your music and also, what are you listening to nowadays?

We´re all listening to different bands and musical styles. To break this big bunch of music down to a few actual metal bands, it would be: Architects, As I Lay Dying, This or the Apocalypse, Beartooth, Alexisonfire, Bring me the Horizon, Thy Art is Murder, Texas in July.

Posted by OccultBlackMetal at 3:20 PM