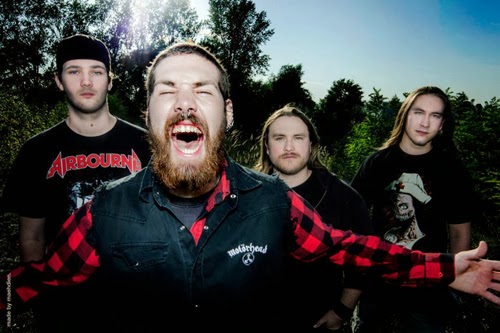 Currently the band is writing new material and planning on shows for this year as well as organizing their own festival which takes place two or three times a year.

2. A couple of months ago you put out a new EP, can you tell us a little bit more about the musical direction of the new recording and also how does it differ from the one you released in 2011?

It differs a lot from the material released in 2011. We put much more groove in it and added more complexity to our song structure. Also the guitar work came to a totally new level with our latest EP which cannot only be recognized   in the technique but also the melodic parts became more and more important to our music than ever before. We also have learned a lot since the last release when it comes to recording songs. Because of the fact that it is a self recorded and released EP we needed to learn a lot about how to use the equipment we have at the moment to make the EP sound like it does now.

3. Can you tell us a little bit more about the lyrical topics and subjects the band explores with the music?

The lyrical topics are about many things. It's about inner feelings someone can have about the people’s behavior against each other and the reflection of it. About being hurt several times but still standing strong; sometimes even about destroying yourself for some reasons. Everything a human being can explore in his live.

4. What is the meaning and inspiration behind the name 'Trigant'?

“Trigant“is a demons name. He is described with a screaming voice that enrages people against each other and once he has settled down in your house you can’t get rid of him anymore. In some way this describes music in our days. People always discuss about bands or artists which one is better who they like but if you have found a band for yourself you won't leave it aside for a long time.

5. What are some of the best shows that the band has played over the years?How would you describe your stage performance?

The Band always has a powerful performance no matter how many people show up or how big the venue is. We simply have a lot of fun playing live and this can also be noticed in the audience. A little joke at the right time let everyone leave with a smile on their face. And what better reason can there be to go to a concert then having fun? We get a lot of positive response from the crowd wherever we have played. The young generation that likes our power and the older ones that like our heavy metal influences. The greatest show we have played were
“Smash Fest“and always our “Metal im Markt“ where it doesn't matter when we hit the stage: first or last it's always a big blast for everyone.

As mentioned before we are planning shows at the moment and are still searching for more. On our Facebook page we already have released one date in September where we will play at the “Charity meets Metal” festival in Belgium.

7. Currently you are unsigned, are you looking for a label or have received any interest?

At the moment we haven’t received precise interest for signing us and it hasn’t been a main part of our planning for the moment. We are pretty much open minded when it comes to this part of business.


8. On a worldwide level how has the feedback been to your music by fans of thrash metal?

At the moment we didn't receive so much feedback from around the world. For that reason we are working together with Markus Eck from Metalmessage to get the people known to our music. But what we've heard has always been positive since now.

9. What musical direction do you see your music heading into on future releases?

That’s a good question. We don't plan our music. We are writing it as we are going along. That is the reason that sometimes our rehearsals are more like jam sessions. This is how we create our sound. Four individuals taking their ideas together and making it sound what they believe is the right way to get it done. At the moment we think about a full length album for our next release and for the first time doing it in a studio. Those are the plans so far.

10. What are some bands or musical styles that have had an influence on your music and also what are you listening to nowadays?

You can name a lot of bands here for example Machine Head, Slayer, Metallica, Testament, Pantera, Crowbar or Black Label Society when it is just the metal sector but this is just a tiny bit of that what the band members are listening to. We all come from different directions of rock and metal music and also other genres so you can't say precisely it's just this and that.

11. Do you have any non-musical interests?

I think we are just pretty boring full time musicians. We all have jobs and girlfriends (even the drummer :D) so there isn't much time and money left for other things. Justjoking. It’s more like doing typical things like hanging out with friends going out partying and stuff like that.


12. Before we wrap up this interview, do you have any final words or thoughts?
The only thing we have to say is: “get your ass up and do it!” and we hope to see you on the road!

Posted by OccultBlackMetal at 6:50 PM