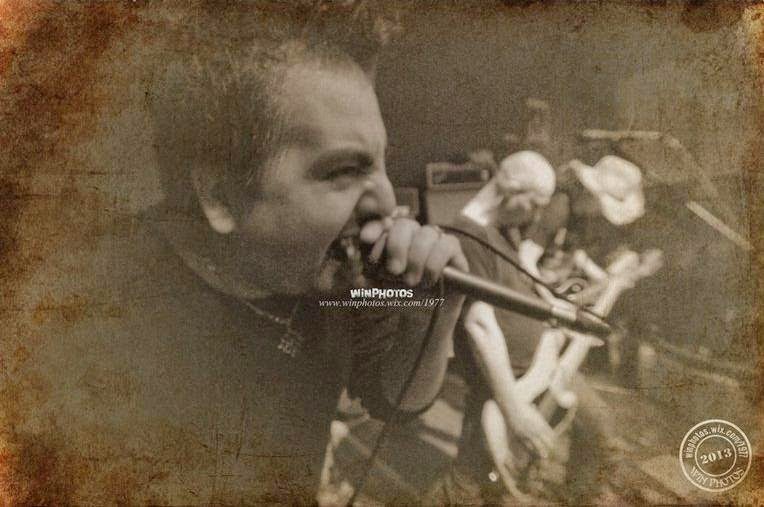 1.For those that have never heard of you before, can you tell us a little bit about the band?
Worselder is metal band from Pamiers (France).The line-up it quite classical and stable since the beginning of the band: two guitars (Yoric & James), drums (Mitch) bass guitar (yannick) and vocals (myself, Guillaume a.k.a "Glen").
The band was born in 2007, when we decided to merge our previous bands Gunslinger and Arclite. We play some kind of "melting-pot" metal, with huge influences of groove metal and stoner, with songs built for live shows above all !

2.So far you have released one full length and an ep, how would you describe the musical sound that is presented on both of the recordings and also how do they differ from each other?
Our music was in constant evolution for several years. When we recorder our first self-released album "Where we come from" in 2010, it was mainly oriented to 90's Thrash  and Groove metal, with many melodic and technical parts. Since then, we tried to focus on the live efficiency of our music.
From our point of view, Worselder songs shall be experiences live. Studio recordings are mostly a way to promote the band, but the real purpose is playing live ! When you listen to the "MMXIV" EP, our latest release in date, you notice that our music was simplified and directed to the basics of metal, with new stoner influences.
I thinks that we have now reached the musical maturity that is necessary to be recognized by the public. People listening to our song quickly understand that we want to do something quite different from the actual metal scene. This is absolutely what we were expecting !

3.The first album was released in 2011 and it took 3 years for another recording to come out, can you tell us a little bit more about the gap between releases?
You're right... there was a huge gap between "Where we come from" and "MMXIV". As for 99% of metal bands, we are not professional musicians. We all have time-consuming jobs and familial responsibilities to assume. However, we spend as much time as possible playing music !
On the other hand, we were not in a hurry to record new stuff, because we thought our music had to evolve. It was not time to enter the studio before we had something really new to offer. It's now done with "MMXIV". But don't worry, you won't have to wait three years more for next Worselder release !

4.What are some of the lyrical topics and subjects the band explores with the music?
I plead guilty for worselder's lyrics ;-) From my point of view, music must be the carrier of committed ideals, and maybe metal more than other styles. The violence of metal music shall be used to express the troubles of society.
So, the topics of our songs are recurrent : social alienation, war, injustice, religion, corruption... Therefore, they tend to be really topical.
For example, in "MMXIV", I talk about  people that are blind to the world's troubles ("The Sickening"), the dark side of occidental societies ("Home of the Grave") and the loss of identity against the norm ("The Haven").
Maybe you'll find this is not very original, but it has at least the merit of sharing my conception of our world !

5.What is the meaning and inspiration behind the name 'Worselder'?
All I can tell you is that WORSELDER is a word play that expresses our attachment to the land where we were born.  A case of beer will be offered to the first one who understands it !

6.What are some of the best shows that the band has played over the years and also how would you describe your stage performance?
We had so many good times playing live ! It would be difficult to tell which are the best ones, but maybe some shows were more important for us, because of the headlining bands we played with. I could mention Firewind, Huntress, Dagoba or Black Bomb A for example.
But whatever the conditions of the show, headlining or opening for other bands, we always try to keep the same voluntary attitude. We come to play crushing music, we have to be striking and efficient. It is very important for us to respect our audiences; we can play the same way for five or five hundred people !

7.Do you have any touring or show plans for the future?
No touring plans at the time, but certainly some occasional shows.
Since the release of "MMXIV" we spend a huge amount of time promoting the band.
We also begun composing new songs, to prepare the recording of our second album.

8.Currently you are unsigned, are you looking for a label or have received any interest?
Worselder is still unsigned at the time, mostly because we did not take the time to search for a label, as we did not have professional stuff to promote the band.
Now "MMXIV" is available, I think we will try to contact some labels. It will become important to be signed for the release of our second album.
So if any label owner is reading this, please listen to our music and don't hesitate to contact us. We will have interests in any proposal !

9.On a worldwide level how has the feedback been to your music by fans of metal and hardcore?
It is stunning to see how different are the metal networks in France and abroad!
"MMXIV" was very well received in many countries all over the world. We had fantastic reviews in USA, South America, Germany, Spain, UK, Greece... Our EP was even chosen in the top ten releases of 2014 by an argentinian webzine !
Our songs were played worldwide on metal radios and our youtube channel receives great feedbacks also.
But paradoxically, we did not aroused any interest in our own country at the time... In France, metal specialized medias, as well as tour promoters, seem to be very elitist, and rarely give their chance to rising bands before they already have succeeded on foreign scenes.
I think this is really unfortunate... hopefully, there is a solid base of metal fans, with many active associations and emerging labels that try to make it change.

10.When can we expect another full length and also where do you see the band heading into musically during the future?
If things go well, we should be entering the studio by the end of 2015 to record our second album. We are currently working on the new songs.
Our musical orientations should not change until this new recording, but you could have some surprises !!!
More seriously, the upcoming album will be in the straight line of "MMXIV". I think our music has now reached a good balance between originality, technicality and power.

11.What are some of the bands or musical styles that have had an influence on your music and also what are you listening to nowadays?
I'd say that we could be influenced by any kind of music and artists, not only metal. In facts, our most perceptible references are obviously 90's groove and thrash metal bands, as Coroner, Pantera or Testament, Machine Head or Grip Inc.
Amongst recent bands, I would quote DevilDriver, Gojira, Mastodon...
But Worselder members are not exclusively focused on metal : James and Mitch also play in a vintage stoner band (Doctor Doom) and I am the lead singer of a 80's rock cover band (Hydra) ! Somehow, I thinks this has also an influence over Worselder's music.

12.What are some of your non musical interests?
Apart from music, we all have various occupations (I personally have political commitments... hum... It could explain Worselder's lyrics !), but we all have one common center of interest : our families. There are now six children in the Worselder Crew so the next generation of metalheads is coming ! Drinking beers also takes us so much time…

13.Before we wrap up this interview, do you have any final words or thoughts?
Thank you so much for this interview. It's great to know that our music is heard and appreciated.
I want to invite all of our readers to visit our "bandcamp" page (worselder.bandcamp.com). There, you can download for free all of our releases, including our latest EP "MMXIV".
Please also take the time to like our facebook page (www.facebook.com/worselder), and even leave a message to let us know your feelings about worselder's music. Such feedbacks, good or bad, are very important : they help us still improving our music.
Stay metal !!!

Posted by OccultBlackMetal at 3:13 AM