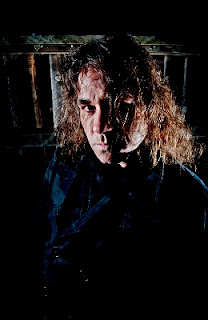 Can you give us an update on what is going on with the band these days?

The album, “Heroes or Origin” just came out on Massacre Records and we are working hard to get the word out, trying to let all the fans know about it.  We are also working on getting a full time booking agent to put Hatriot out on the road.  We are ready to get out there and push this thing to the people.

How would you describe the musical sound of the new album?

I tell people that this is a heavier version of Exodus, sort of like ‘Tempo Of The Damned’ but more intense and more brutal.  It is definitely thrash metal, there’s no doubt about that, but there are some extreme metal influences thrown in there as well, and a lot of that has to do with how young my band mates are.  They have a whole other batch of influences that we put into our thrash metal.  It is fucking heavy stuff!

I am a dark and sinister type of guy when it comes to lyrics.  I write about anything that intrigues me, and that is usually horror movies, zombies and vampires, school shootings, suicide bombers, and things like that.  You will never get a love song from Zetro, unless it is a song about no love. 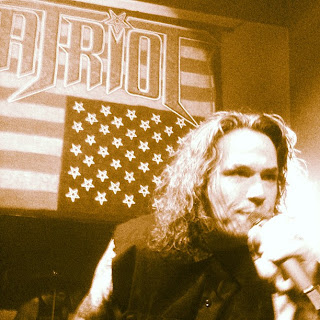 What is the meaning and inspiration behind the bands name?

The word Hatriot comes from the Exodus song ‘Scar Spangled Banner,’ where I say “I’m no patriot, just a hatriot.”  The word means a person who loves their country but disagrees with the government and the way things are handled in politics.  I felt that it was a very strong and powerful term, plus it ties this band to my days with Exodus, so it seemed like the perfect name for a brutal thrash metal band.

What are some of the best shows that the band has played so far and how would you describe your stage performance?
We have done a handful of shows here in California and those have been mainly with bigger national bands like Testament, Forbidden, and Death Angel.  They were obviously very good shows to play and we were honored to be on the bill and in front of those bands’ fan bases.  Our stage performance is very intense.  We don’t stop and chit chat between songs or anything like that.  We start the show and pummel the crowd the entire set without stopping.  Our show is all about intensity.


Do you have any touring plans for the future?
We are working on that now actually.  Our management has been talking with some agents and there are some leads coming in.  A lot more offers should come in once we see how many records are selling.  It is our goal to get to as many places around the world as possible.  There are metal heads in every corner of the earth and I plan on reaching as many as we can.


On a worldwide level how has the feedback been to your music by fans of thrash metal?

It has been amazing.  The fans of what I did with Exodus back in the day are rejoicing over Hatriot.  I didn’t go soft on them.  I may be 48 years old but I thrash harder than anybody.  The feedback has been great and we have been receiving stellar reviews in the press as well.  Everyone is hearing this album and realizing that it isn’t a gimmick with my kids in the band and it isn’t some half ass side project.  Hatriot is the real deal and we are set to destroy.


Are there any other musical projects besides this band or is this a full time line up?

Nope.  Hatriot is all I am doing from now on.  Dublin Death Patrol is basically over with.  I wrote some lyrics for the past couple Testament albums but I think I am done with that too.  I am devoting all my energy to Hatriot and it is my goal to make this band a big name in the metal world.  It will happen you can mark my words. 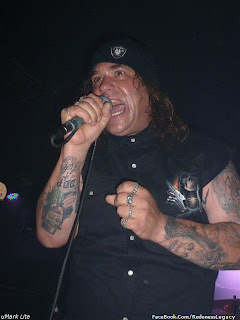 What direction do you see your music heading into on future releases?

I would say it is only going to get heavier.  Hatriot is already well into the second album as far as writing goes, and it is a continuation of what we did on ‘Heroes Of Origin.’  I truly believe that is our signature sound and we are going to continue down that path with future records.


What are some bands or musical styles that have influenced your music and also what are you listening to nowadays?

As far as me personally I love all the old classic hard rock and metal, bands like Iron Maiden, Judas Priest, Saxon, Dio, Black Sabbath, UFO, and the list goes on.  I like a lot of modern bands of today as well, such as Shadows Fall and Slipknot.  I think they are fucking great.  As for the bands’ influences, you have to remember the guys in Hatriot are a lot younger, so they are into more extreme music.  Kosta loves the Florida death metal scene, bands like Death and Malevolent Creation.  My sons are into modern extreme death metal.


Outside of music what are some of your interests?
I’m a family man first and foremost.  I have an amazing girlfriend and she and her sons live with me, so I do the father figure thing at home and that is a very cool thing.  I am also into football and other sports.  Right now I am on a health kick, basically trying to get in shape for the tour, so I am into running and working out.  I am an avid horror movie fan and I watch as many as I have time for, and I am actually adding classic horror characters to my tattoos.  I am working on a classic horror sleeve right now.


Any final words or thoughts before we wrap up this interview?

I just want to thank you for the interview and thank all the fans for sticking by me and for following all the chapters in my career.  Hatriot is going to be a strong force in heavy metal for many years to come and I owe it to the fans more their support.  I can’t wait to see you all on tour!  Cheers - ZETRO 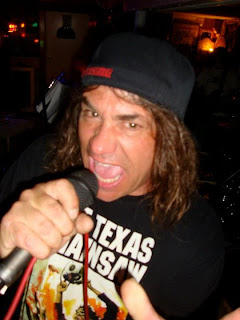 Posted by OccultBlackMetal at 3:31 PM