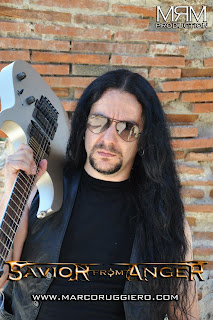 1. Can you give us an update on what is going on with the band nowadays?
Very well brò! In this mouth is out our new album " Age of Decadence " for italian label My Graveyard Production.
We're planning a new tour for new album.

> 2. How would you describe the musical sound of the new album and how it differs from previous releases?
The songs of new album are ispired from US metal, in the pure Metal Church, Anthrax, Riot and Viciour Rumors style.
Our music is Eighties style oriented, our old album are more speed metal and thrash style oriented in vein of Overkill, Annihilator, Exciter and many more.

> 3. What are some of the lyrical topics and subjects the new release explores?
War, society, inner struggles, death, life, violence and more....

> 4. What is the meaning and inspiration behind the bands name?
Savior from Anger is the song name of Vicious Rumors from Welcome to the Ball album.
I love Vicious Rumors song and US metal.

> 5. What are some of the best shows that the band has played so far and how would you describe your stage performance?
On 2009 we were in tour with Vicious Rumors in Germany, great shows!  In our carrier we played with: Skyclad, Sacred Steel, Anathema, Dark Tranquillity, Blaze Bayley, Destruction and more...
Our shows are energy and power, a real shock wave, inspired to all the bands of Eighties!!! You visit our You Tube channel and take the llok!
The music is a big passion for us.

> 6. Do you have any touring plans for the future?
Yes, we're planning a tour italian and european tour.

> 8. On a worldwide level how has the feedback been to your new album by fans of power and thrash metal?
Great reviews! The new metal kids loves this style of music.

> 9. What is going on with the other musical projects these days?
It's time of crisis for music business and I hope for a reborn of the scene. Poor and wars are killing the music.
I recorded also an album with Doom metal band In Aevum Agere " The Shadow Tower", we signed with german label Pure Steel records.

> 10. What direction do you see your music heading into on future releases?
We'll record a new album on 2014. The songs are enhanced by Power metal influences with a melodic touch.

> 11. What are some bands or musical styles that have influenced your newer music and also what are you listening to nowadays?
I listen Riot, Sleepy Hallow, Attacker, Crimson Glory, Meliah Rage, Heretic and all the bands that ispired me like: Helloween, Primal Fear, Gamma Ray, Malmsteen and more...

> 12. Outside of music what are some of your interests?
I love the dogs and the birds, travel and buy cd's.

> 13. Any final words or thoughts before we wrap up this interview?
I thank you very much for all, awesome interview! Our official site is   www.marcoruggiero.com
Best wishes
Posted by OccultBlackMetal at 5:24 PM