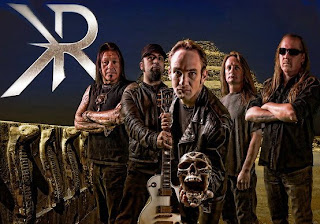 The band is presently been working on our sophomore CD which we are about half thru with at the moment and we’re also gearing up for our debut US tour in March. We also welcomed aboard a new guitarist named Mehl Anoma who replaces Roberto since he had to leave the band because of job and family responsibilities and wouldn’t be able to tour with us now or in the future. So a lot of positive things at the moment.

2.      How would you describe the musical sound of the new album?

We use the term Thrash and Roll and I think it’s fitting since we are definitely a thrash based band, but also like to bring in other elements of hard rock, classic metal, and modern groove, whatever. So I don’t really consider us a true thrash band and that’s probably for the best because there are so many of the classics that do it great so why try to compete with that when we can do our own thing.

3.      What are some of the lyrical topics and subjects the new album?

Crimson our vocalist writes about anything and everything so it varies. Some common themes on this CD were war, greed, sacrifice, sex, etc.

4.      What is the meaning and inspiration behind the band’s name?

Nothing too deep really. We just started throwing ideas around and this was the name that we all liked. It’s metal enough and has some imagery to it and it’s easy to pronounce and remember.

5.      What are some of the best shows that the band has played so far and how would you describe your stage performance?

The band has only played a handful of shows to this point and we’ll be touring like I mentioned so maybe that’s an answer for a later date. But as far our performances we’re all old schooler’s so we like to energetic and in your face. HA!

Like I mentioned US Tour in March and if we’re lucky maybe some dates in the future in Europe and anywhere else they’ll have us.

7.      Currently you are signed to Scarlet Records, how did you get in contact with this label and how would you describe the support they have given you so far?

That was handled by our management Rock N Growl. We had been shopping our CD for awhile and Scarlet came into the picture and it seemed like a good fit for this CD to get the band out and start building a name and following. So far things have been ok and going smoothly.

8.      On a worldwide level how has the feedback been to your music by fans of thrash metal?

The response has been pretty positive. We’ve had some great reviews and a couple shits ones too, but that’s to be expected. Like I was saying we’re not a true thrash band so those expecting that and not having an open mind about might have been let down, but those that did seemed to enjoyed the positive vibe of the music and our refreshing approach to playing metal.

9.      What direction do you see your music heading into on future releases?

Since we’re knee deep in the recording I’ll say that some of the material is heavier, but also a little more progressive and somewhat commercial. More focus on catchy choruses and they’ll be plenty of shredding guitars. So all in all just the next logical step from the debut.

10.  What are some bands or musical styles that have influenced your music and also what are you listening to nowadays?

We all have varied tastes from metal, to blues, to commercial rock, to whatever so I know most of the guys don’t even listen to metal that much anymore, but we all have the same roots in the classics like Priest, Sabbath, etc. along with Bay Area Thrash and even some of the early Tampa Bay Death Metal scene.

11.  Outside of music what are some of your interests?

For me it’s cooking, biking, sports and my family since I have 2 kids. For the other guys some like to fish and golf and race motorcycles, but we spend most of our time working on the music.

12.  Any final words or thoughts before we wrap up this interview?

Thanx for interview and help in spreading the gospel of Kill Ritual and Metal is the Law!

Posted by OccultBlackMetal at 11:01 PM