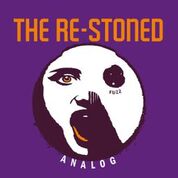 The  Re-Stoned  plays  a  musical  style  that takes  psychedelic,  stoner,  and hard  rock  and  mixes  it  in  with  the  heaviness  of  doom  metal  while  also  keeping  everything  instrumental  and  the  production  sounds  very  professional.

Posted by OccultBlackMetal at 8:19 PM