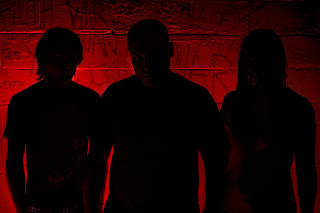 1.Can you give us an ­update on what has be­en going on with the ­band since the record­ing of the new album?

"After we hit the studio last June, our time has been spent on a lot of practice, prepping for tours and getting all the details figured out for the album release. Less than a week after recording, we hit the eastern US for a 10 day tour and we're currently Day 13 into a 17 day tour. It's been a constant train of events of band life and homelife. It's been fun though."

2.You have a new albu­m coming out in Octob­er, how would you des­cribe the musical sou­nd that is presented ­on the recording and ­also how does it diff­er from the stuff you­ have released in the­ past?

"We started RIG TIME! with the only guarantee of sound being that we'll always be heavy. Under that umbrella, we're fans of industrial, black metal, old school hardcore punk, nu-metal, 90's metalcore, a lot newer heavy hardcore peers, etc. We draw a lot of inspiration from many different sects of heavy music. I can say that "WAR" is definitely fierce and very aggressive. In comparison to previous releases, it's much more focused and direct album. We have always focused on the groove in our songs. It has to feel right, and nothing is forced. If something doesn't feel natural to us, and we can't get into the vibe of it, we rework it until it is just right. "WAR" is a solid 10 songs of strong, deep, heavy, angry grooves that represent what we feel at this time. It's human, raw and feels almost tribal at points."

3.What are some of th­e lyrical topics and ­subjects the band exp­lores with the newer ­music?

"The album is a concept of being at war with everything around you. There is a lot of deep meaning that is hard to explain in ways other than already written in the lyrics. Songs like "Garbage" and "Blister" address the constant flood of negative attitudes and hatred around us at all times. Naive and impulsive word vomiting without any remorse or factual knowledge on what they're really saying. "Deserve" is a blunt description of our country and the poor situations, we as citizens, get drug into on behalf of our government and their lack of care for the people. It's about accepting that we will all suffer as a result of our government getting they deserve. Other songs like "Discomposure" are more personal, and about a specific war and hatred of myself that I suffer with, and "Vengeance" is about letting the built up, constant anger i feel about humanity and the world out, without filter. I am a very angry person, but I use the lyrics as way to release the feelings to stay calm and come out positive and optimistic in the end. In "Succumb", our bassist, Mark, wrote the lyrics as a reminder and anthem for us, and anyone really, to stay true to who they are. "

4.What is the meaning­ and inspiration behi­nd the name 'Rig Time­!'?

"Long story short, it came from a memory all three of us share from being on the road in a previous band. It is an odd name, but when the band came together, it gives a whole new meaning. We didn't want a typical tough name. Gorrilla Biscuits, KoRn, and Weekend Nachos are weird names, but it worked out for them...and yes, it's capital R I G, capital T I M E, exclamation point. You've gotta scream it. (Laughs)"

5.What are some of th­e best shows that the­ band has played over­ the years and also h­ow would you describe­ your stage performan­ce?

"We've played some amazing places across the country and some awesome shows. We always loved playing Wichita when we started out. Cincinnati is our second home for sure. We have many great friends there, and the Cinci hardcore scene is very welcoming. Our hometown shows at the Warehouse in La Crosse, WI are always getting more and more wild. As for specific shows, it's hard to narrow them down. Our stage show has been described many times as "terrifying" in the past (laughs). We usually play with only red backlighting, and used to use tons of haze to get everything disoriented. We try to create a vibe and atmosphere of the sound we create. The lighting was also meant to encourage less focus on the band on stage, and more of the music coming out the PA. Close your eyes, let go and feel the music.   I'm told we're pretty intense and passionate live. We have had a lot of people say we're very aggressive."


6.Do you have any tou­ring or show plans fo­r the future?

"We have tons of dates always coming in. After this tour with Death Card and Barren, we'll be playing Wisconsin Hardcore Fest II in La Crosse on September 22. Then, we have a tour from October 8 to October 14 in the center of the US. We leave again Oct 24 to November 15 for an east coast tour. After that, we have plans for December, January, February, March and April being figured out as we speak. We plan to keep hitting the road as much as we can."

7.The new album is co­ming out on 'Innerst­rength Records', are ­you happy with the su­pport that they have ­given you so far?

"Yes, very happy. Innerstrength Records is a great label for a band like us. We are still a very DIY, hard working band and this label is a tool that we can use to keeping working hard, but with their support and equal effort along side of us. The roster is some of the best current bands right now, and we're honored to be listed along side of them."

8.On a worldwide leve­l how has the feedbac­k been to your music ­by fans of sludge, po­wer violence and hard­core?

"We've had some genuine, and amazing responses. The best compliment we can receive is when people say that they can't quite compare us to other bands. We hope our music comes out fresh, but familiar. We can play metal shows, hardcore shows, and even have played emo shows that yielded positive responses. I think our ability to be open, raw and emotional live transcends to a lot of audiences."

"We'll always stay a heavy band, but we'll always keep playing with new ideas. We've been wanting to incorporate industrial elements, drone, and different layers to our songs for awhile. Originally, "WAR" was planned in a different musical direction, but that's not what we were feeling at the time. No matter what, we'll stay true to what we feel."

"We are a ridiculously eclectic band. Mark listens to a lot of darkwave, industrial, The Smiths, Drab Majesty, goth and fast crust/anarcho punk. Rebecca really digs The Dillinger Escape Plan, The Ongoing Concept, a lot of groovy hardcore but still jams pop radio. Bryan is all over the place. From a lot of 50's/60's era cool jazz, to 90's R&B, to Darkthrone, The Locust, Deftones, Chromeo, Black Flag, Ramones, etc. Collectively, our favorite band would be The Greenery from Long Beach. That band has been one of the biggest influences, although you may not heat it musically. We draw influence from how a band makes us feel, rather than their sound. We want to create the same feeling they gives. Bands like Dystopia, The Acacia Strain, Incendiary, old Korn, etc. We listen to Debbie Gibson "Electric Youth" on cassette in the van a lot. We make no sense (laughs)."

11.What are some of y­our non musical inter­ests?

"All of us love sweet tea, wings, BBQ, and visiting parks and museums on tour. We scope on gas stations on tour and talk about how cool they are in comparison (laughs). Mark likes to play a lot of Pokemon and World of Warcraft. Rebecca likes to sleep a lot (laughs) and Bryan watches old sitcoms too often."

12.Before we wrap up ­this interview, do yo­u have any final word­s or thoughts?

We're really proud of "WAR" and thankful for the opportunity to share it with so many people. We've been touring for a couple years now, spreading the word of the importance of all ages shows, and pushing it mostly DIY. When we started, we were focused on our goals from the beginning, and we will stay that way. We encourage anyone with a dream to make it happen.

Posted by OccultBlackMetal at 10:33 AM