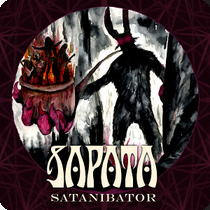 Atmospheric  soundscapes  and  nature  sounds  start  off  the  album  before  going  into more  of  a  heavier  doom  metal  direction  where  you  can  also  hear  all  of t he  musical  instruments  that  are  present  on  the  recording  while  the  female  vocals  also  gives  the  songs  more  of  a  traditional  feeling  while  also  being  very  melodic.

Sapata  plays  a  musical  style  that  takes  heavy  and  doom  metal  and  mixes  them  together  with  some  modern  influences  to  create  a  sound  of  their  own,  the  production  sounds  very  professional  while  the  lyrics  cover  Egypt,  Occultism,  Darkness  and  Depression  themes.