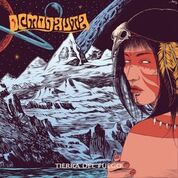 DemonAuta  plays  a  style   of  stoner  rock  that  adds  in  more  of  a  desert  and  psychedelic  atmosphere,  the  production  sounds  very  professional  while  the  lyrics  are  written  in  a  mixture  of  Spanish  and  English  and  cover  metaphysical  themes.