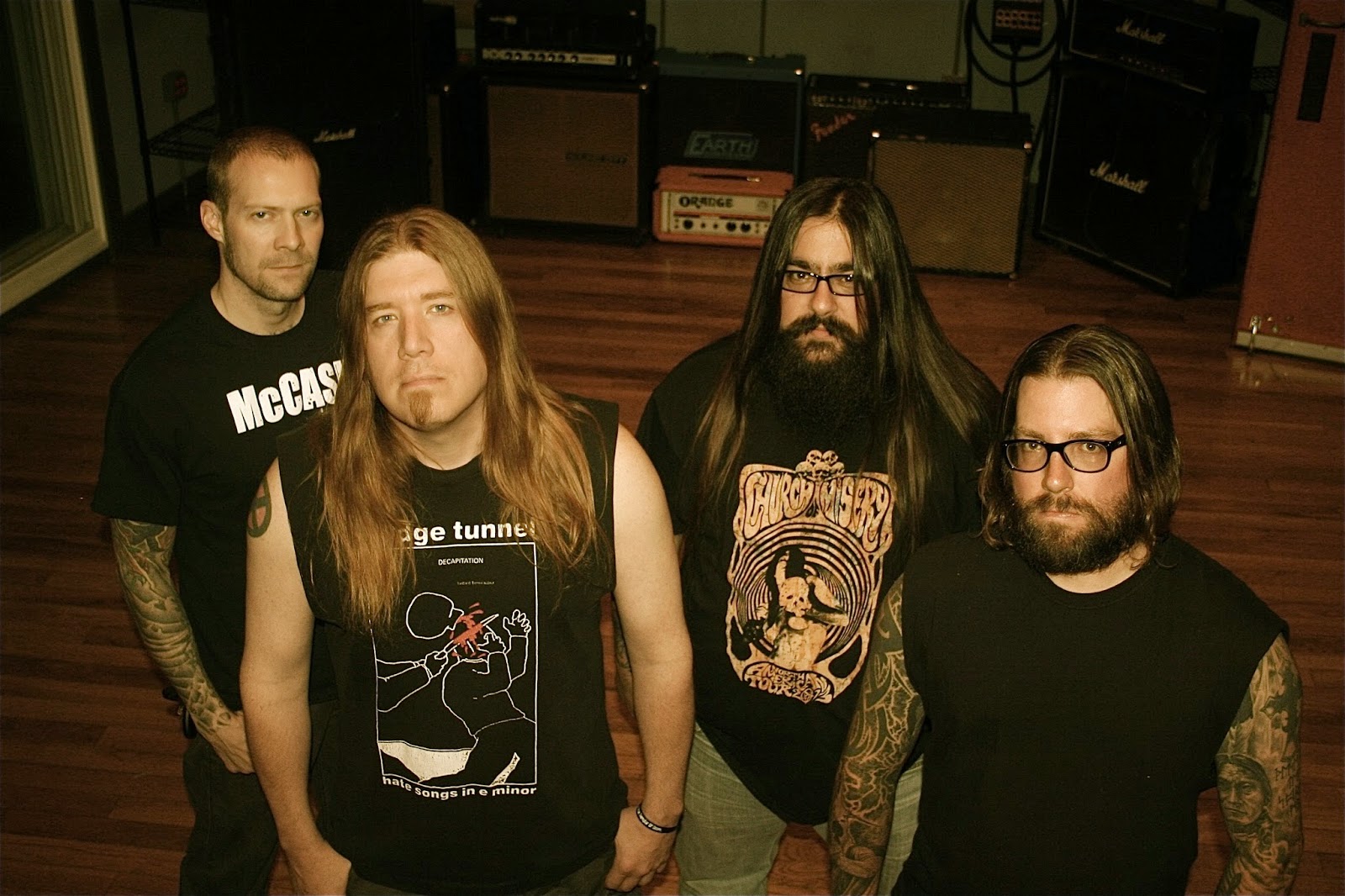 1.Can you give us an update on what has been going on with the band since the recording of the new album?   Since finishing the recording we've continued to play live shows and been busy getting the artwork and layout for the new record completed and have also been focused on getting things in order to shoot a video for "This Mania" the first song to be released off the new record.
2.You have a new album coming out in November, how would you describe the musical sound that is presented on the recording and also how does it differ from the stuff you have released in the past?    This is a heavy metal record that at times takes a "slow burn" approach to hooking the listener in and at other times charges right out of the gate with uptempo and aggressive yet melodic guitar riffs and pummeling percussion. I think the biggest difference for anyone who's familiar with AoS will be how we've exploited the use of harmony vocals to a degree we've only touched on in the past. And I think the listener will likely not only notice the different tunings used in the songs but also the deeper thought that has gone into the arrangements of the new material.
3.What are some of the lyrical topics and subjects the band explores with the music? Man the topics really range from introspection in a psychology and spiritual sense to drug abuse to infidelity to depressive manic episodes. Something for everyone I guess.
4.What is the meaning and inspiration behind the name 'Apostle of Solitude'?  In the most literal sense it would be a person who is a messenger of sorts who's spreading the word(in this case the word is music) and going at it alone. And that was the inspiration in the very beginning. Being a person who was writing music and going at it alone. Luckily for me that changed long ago and I have great musical partners now.
5.What are some of the best shows that the band has played over the years and also how would you describe your stage performance? Some of the best shows have been the festivals we've played simply because the people that are there are really into this genre of metal and seem to get it. That usually makes for a better show because you're not having to try and win an audience over. For the most part everyone is on the same wave length. Describing our live shows is pretty simple. You're going to see a no pretension,tight,heavy band that plays with as much heart and sincerity as anyone around.
6.Do you have any touring or show plans once the new album is released? We're definitely planning on doing some touring we're just not sure yet if it will be here in the US or if the opportunity comes and we can financially make it possible to combine some two to three week touring in Europe with some  festivals that are going on at the same time. That's what we'd prefer because AoS hasn't been to Europe yet and it'd be great to bring the live performances over there.
7.On a worldwide level how has the feedback been to your music by fans of doom metal? It's been largely very positive.  Most people that know who we are and have the records and/or seen us live seem to really dig what we do. Thus far the releases have been on smaller labels that haven't really had a budget to help do things like videos,PR etc..so we're hopeful with releasing a record that we're all really proud of and working with Cruz Del Sur that we can reach more people than we've been able to thus far.
8.What is going on with some of the other musical projects these days that some of the band members are involved with? Our other guitar player Steve stays pretty busy with his other band Devil To Pay which is a little on the stoner rock side of the spectrum and myself I've got a couple different metal side projects that have material but no official band name as of yet but will in do time.
9.Where do you see the band heading into musically during the future? I think we will likely expand on the layered guitar,vocal and arrangement direction we've went with the new record but with no hesitation to write some material that's straight up and to the point heavy.
10.What are some of the bands or musical styles that have had an influence on your music and also what are you listening to nowadays? Everyone in the band is of course heavily influenced by Sabbath,Priest,Maiden and the other various and unfortunately lesser know early god fathers of heavy metal. But we're also all heavily influenced by a lot of punk rock and hardcore and tons of other genre defying artists. I think even the artists you don't like influence you to a degree.
11.What are some of your non musical interests? I think the things we all have most in common aside from music are books,movies and of course beer. A couple of us are really into football,basketball and racing like most people from Indy are.
12.Before we wrap up this interview, do you have any final words or thoughts? I really hope everyone gives the new record an honest listen and doesn't just skim through it the way we all are guilty of from time to time in this here one minute gone the next nanosecond world we live in. We think you'll be glad you did.
https://www.facebook.com/apostleofsolitude

Posted by OccultBlackMetal at 7:11 AM