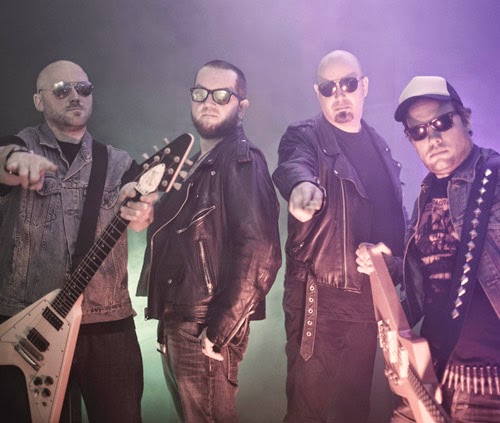 1.Can you give us an update on what has been going on with the band since the recording and release of the new album?
After the recording, which took quite a long time, we prepared to release the album and do  some promotion on different festivals like Rock Hard or Fortarock. We sent lots of CDs and downloads around the world and also got in contact with Metalmessage.de on this way. Metalmessages´ Markus seems to love our new record and is a big help in promoting the new release now. We still think about a release party in the  Whisky Dungeon in Münster, Germany where we had lots of good nights and the owner has always been a big supporter of SKYCONQUEROR.

2.Recently you have released a new album, how would you describe the musical sound of the new recording and also how does it differ from the stuff you have released in the past?
I think with the new record UNDER THE PENTAGRAM we initiated a kind of new period of the band. With „HELLSTORY“ we created a retrospect from 1996 to 2008 and maybe unconsciously closed a chapter of the band´s history with the record. The focus somehow went much more to the influences, the roots and the essence of our music. What we felt was, that there there was an whole new spirit and energy when the first new tracks were recorded.
The music now is often described as old school metal or is compared to the NWOBHM. And that´s right, the music is meant to be pure and simple with the irie spirit oft he initial time of HEAVY METAL. Compared with some older SKYCONQEUROR-tunes one could say that we musically made one more step back in time.

3.The band has been around since 1996 but so far there has only been 3 demos and 2 full lengths, can you tell us a little bit more about the gap between releases?
We all had our lives to live. At this somehow SKYCONQUEROR´s plan to take over the underground went out of sight, out of mind. Next to the music we finished our studies/educations and started working. Only Daniel already worked as he joined SKYCONQUEROR. We made some trips together and moved to different cities – but not too far away so that we still can meet in the week or at the weekend for rehearsal or having a drink together. And now we´re here and ready!

4.Your lyrics cover a lot of occult topics, can you tell us a little bit more about your interest in this subject?
That is one of our favorite topics since we started the band. Mostly influenced by early Black Metal, bands like King Diamond/Mercyful Fate, Venom and the 2nd Black Metal wave in the early 90s. We all grew up in a mostly catholic area and had to participate in christian activities like confirmation or the sacrament which we all really were or are not connected with. So that was and is still always something to talk about. Maybe that was also a reason for our interest in occult topics in the past.

5.What is the meaning and inspiration behind the name 'Skyconqueror'?
The name SKYCONQUEROR was introduced by Jan. Maybe it was also inspired by the occult with the meaningthat we are the ones who came from hell to conquer the sky.  I think we still pray for that to happen…haha!

6.What are some of the best shows that the band has played over the years and also how would you describe your stage performance?
There were some really good shows in the past. For example an open air festival in Nordkirchen against racism with several hundred maniacs in front of the stage, which we absolutely did not expect. Another fantastic gig was right after the making of a splatter-b--movie (Fate & Destruction) where we took part in the crypts of the former Rock Café in Lüdinghausen. We entered the stage wearing a kind of corpse paint from the movie and the gig in the over crowed pub was a lot of fun.
Right now we  do not have special effects or something like that on stage. We try to inspire people with the pure energy of our music and the raw passion..

7.Do you have any touring or show plans for the future?
No, we haven't planned anything at the moment. We had a lot to do with the release of the CD and wanted to concentrate on it, so we skipped anything else for the release. But now we would love to play gigs wherever it is possible – even when it´s sometimes hard to find a date because of Jans´ shift work and our families.

8.Currently you are unsigned, are you looking for a label or have received any interest?
We have not  sent any copies to labels. With oomoxx we have a good partner for the distribution and Metalmessage helps us with promotion. We´ll follow what´s going on with Under The Pentagram, but right now we don´t see any advantage of having a label for us.

9.On a worldwide level how has the feedback been to your music by fans of heavy metal?
We are very excited about the huge feedback that comes from different places all over the world. For example we got in contact with some crazy metal guys from Peru. Most often the reviews have been excellent and the support by the fans on our homepage is very enthusiastic.

10.Where do you see the band heading into musically during the future?
At the moment we are really proud of finishing the  record after a long time, during which we had no time to make new songs. And now – first time ever shortly after a recording – we already have some new songs and work on the next release. So it´s good to know, that we can start to record  new  stuff much faster than the last time.
And of course we  would love to play the songs from Under The Pentagram live in the near future wherever people would like to listen.

11.What are some of the bands or musical styles that have had an influence on your music and also what are you listening to nowadays?
We all have huge record collections. The biggest influence on the music of Under The Pentagram and our former recordings is the heavy metal of the early 80s. But there are different styles in hard music we love and which find their way in our songs (just listen to the guitar in the 2nd half of Demon – you surely will realize that we like some black metal as well).
It´s a wide variety of different styles we like – from Rush to Dissection, from Magnum to Slayer and from ZZ TOP to Darkthrone
Nowadays we still listen to old stuff and new old stuff.

12.What are some of your non musical interests?
We all like to travel around. Daniel loves to go  camping to Perigord, France with his family, Mirko enjoys travelling to Southeurope, Jan is a big fan of the Alps and Carsten made for example several round trips especially in Northamerica. Mirko and Jan also like travelling to Belgium together to degust the latest beers and genevers over there.
We like to spend time together in beer gardens. Some like sports like hiking, biking, snowboarding, inline skating, canoeing and the others prefer to relax. Mirko tries to brew his own beer, Jan collects horror movies…

13.Before we wrap up this interview, do you have any final words or thoughts?
You readers, if you like heavy metal of the old school then just have a look at our homepage and listen to some of the new songs! Keep up with us for new stuff and gigs. Support the underground! Take care!

Posted by OccultBlackMetal at 2:41 PM