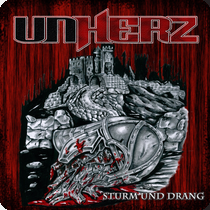 Dark  sounding  synths  which  also  bring  a  symphonic  feeling  to  the  recording  and  clean  playing  start  off  the  album  along  with  some  melodic  vocals  after  a  few  seconds  which  leads  to  a  more  hard,  heavy  and  melodic  direction  which  combines  mainstream  hard  rock  with  metal  and  after  awhile  hair  metal  style  guitar  solos  and  leads  are  added  into  the  bands  musical  style.