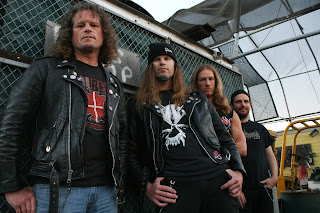 Kenny: Mike (singer/guitars), Noel Bailen (old vocalist) and I started the band in 1986.

Mike: Noel is the one who had us on a crash diet of Exodus, Metallica, Kreator and all of those types of thrash bands. He took me to the legendary Ruthie's Inn in Berkeley for the first time to see Possessed.

Kenny: We ended up as a five piece band until 1992 when we all took a hiatus from the band. We reformed as a three piece band in 1999, and have since added a second guitarist, which is the line up you see today.

2. How would you describe your musical sound?

3. What are some of the lyrical topics and subjects the band explores with the music?

Mike: I like to write lyrics that have a little bit of a darker tone to them - things like end of the world, apocalpyse type of lyrics. Sometimes I also get influenced by stuff I see or hear on the news, or details that are on crime shows - things of that nature. You can't help not being influenced by that.

4. What is the meaning and inspiration behind the bands name?

Kenny: We used to play parties with a bass player friend of ours, John "Jage" Jacobsen, back before the original line up of the band. We called ourselves PT (short for Power Trio) at that time. Jage went on to attend Bass Institute of Technology in LA and he stayed down there. I had drawn a really cool logo for PT and we were trying to come up with another band name so we could still use the initials PT. That's how we came up with Potential Threat.

Mike: We found out there was an old punk band in England with the same name, so we added the SF on the end. No disrespect to the original Potential Threat, of course.

5. What are some of the best shows that the band has played so far and how would you describe your stage performance?

Kenny: From back in the original days, we had some great shows with bands like Slayer, Testament, Overkill, Nuclear Assault, King Diamond - there were a lot of good times back then.

Mike: I think from our more recent tours, we both agree that our favorite show was when we played with Death Angel at the famous Whisky A Go-Go in October (2012). We had never played there, so it was kind of a historical show for us, and the fans were awesome!

6. Do you have any touring plans for the future?

Kenny: We will definitely tour once the CD is released, but we don't know for sure where we are going. We have toured the States and we have toured Europe, so anything is possible. We'd really like to play a festival at some point.

7. Currently you are signed to Old School Metal Records, are you looking for a label and if so what kind of label do you feel that would be a perfect fit for the music?

Mike: We love OSM Records and Patrick has helped us a lot, but our contract is up after we release this record. We like to keep our options open, but our ultimate goal at some point is to be able to have a label that can help us land some bigger tours so we can get our music out there to even more people.

8. On a worldwide level how has the feedback been to your music by fans of thrash metal?

Kenny: We have received a lot of support in Europe and the States, and are now starting to get a bit of a following in Asia and South America, so I think we're doing really well. When we play a show with other thrash bands, the fans really go nuts, and it make us want to play harder for them. We have even been getting responses from people in Russia and India, and I think that shows how far-reaching any type of music can go if the fans are willing to listen.

9. What direction do you see your music heading into on future releases?

Mike: This is the first album we've released lately with two guitarists, and we started as a three-piece at the beginning of the recording for Civilization Under Threat, so I think we'd really like to explore the use of more harmonies. Don't worry, we're still going to be thrashy and heavy - I mean, Megadeth did it a long time ago, why can't we?

Kenny: We also started writing some news songs in the key of E, so we may do a bit more of that.

10. What are some bands or musical styles that have influenced your music and also what are you listening to nowadays?

Kenny: We're definitely influenced by Metallica, Heathen, Death Angel... really, most any of the bands we started with when we were first introduced to that part of the genre are our influences. The first bands that get you into a genre are usually the ones that you are influenced by, and it's no different with us.

11. Outside of music what are some of your interests?

Kenny: I'm into anything to do with history, travel, ancient aliens, science debunking religion, and any channels on tv that have shows like that. Anything to broaden my horizons.

Mike: I like watching a lot of forensic science shows, American Dad, Seinfeld and Family Guy. I love thriller movies and comedy movies as well.

12. Any final words or thoughts before we wrap up this interview?

Mike: Get yourself some new tattoos and see you on the road!

Kenny: I got nothing. I'm a man of few words.

Posted by OccultBlackMetal at 3:12 PM