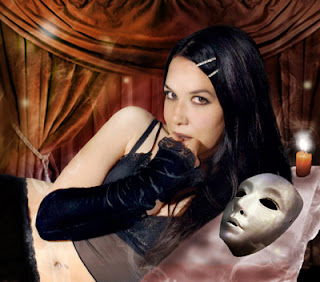 1. Can you give us an update on what is going on with the band these days?
At the moment, Doug and I are working on a few songs that we'll start working on with the band in the next few weeks. I think Marius has a few ideas on the burner as well. The musical chemistry between the current members is extremely good and we love writing for the various strengths within the band. Sean Currie is an incredible drummer..so creative and dynamic..Marius is just unbelievable in his intricacy on guitar not to mention his the creativity in his arrangements. Doug Sellers has brought a mystical beauty to our writing that has been truly exciting to experience. Everyone adds something in this line up...something that was not the case in the past.

2. How would you describe the musical sound of the new album and how it differs from previous releases?
This record is much darker, more dense  and gothic/symphonic in it's textures...we have moved away from the folk themes quite a bit, though we did continue the use of flutes on several of the songs. Fausto Miro...a real artist on flute, joined us for a few tracks. I chose  a less operatic style on some of the tracks..it just didn't seem to fit some of the material.

3. What are some of the lyrical topics and subjects the band explores with the new album?
Well..this record was written during some of the darkest moments of my life as I discovered my son was suffering from a serious illness. Some days I could barely even move due to the pain and grief I was suffering but something inside me compelled me to continue writing and working on this record. You'll hear some of that darkness reflected in Captive Soul and Drown Within particularly.

4. I know that the singer has a background in opera, how would you compare opera to metal?
Opera and metal are strangely similar in that you have emotions and life represented in an exaggerated way. I personally feel more comfortable in the less constrained aspects of metal, however, because within opera you are always interpreting the materials of others and you are somewhat limited by the expectations of the genre. I have grown a great deal as a musician from leaving the operatic world as it has also encouraged the side of me that wants to improvise. Much of classical music is taught as reading sheet music and executing it perfectly. I can't describe the ways in which that held me back as a musician. You'll notice in the first two records I was far less comfortable with 'expressive' or 'breathy' singing as this would be considered 'bad technique' in the opera world... By the time I recorded 'Princess of the Night' I was pretty far away from the classical world and far more comfortable singing in a way that I feel is appropriate to the emotions of the song and not for any technical reason.

5. What are some of the best shows that the band has played so far and how would you describe your stage performance?
Best shows...probably when we opened for Kamelot at the State Theatre and a recent one we did for a party at the Brass Mug in Tampa. I'm a pretty emotional performer and not extremely far away from the way I was in opera...just more free vocally. Singing my songs live is very freeing for me as I don't worry about perfection just about sharing the meaning in my songs with the audience...we aren't exactly a party band..we are pretty dark though we do play a few upbeat numbers to keep the bar audiences happy like "Dressed in White" by King Diamond.

6. Do you have any touring plans for the future?
We are looking into some options but I can't say right now .

7. Currently the band is unsigned, are you looking for a label and if so what kind of label do you feel that would be a perfect fit for the music?
I would only want to sign with a label if they were truly interested in growing Mena Brinno as a creative entity. If my music isn't a true reflection of what I want to say and sing...there's no point to it..and I definitely wouldn't want to do it. I'm a very real person and I need my music to be real too..if that wasn't to someone's liking ..I wouldn't change it.

8. On a worldwide level how has the feedback been to your music by fans of gothic metal?
Gothic metal fans have received us very well...though our first two records were a little more of a hybrid sound with heavy metal so I think this latest one has been attracting much more attention than the first two did.

9. Are there any side projects going on with the other band members these days?
Marius does a solo acoustic project, I do session work from time to time( Hate Eternal, Iconoclast, Thy Majestie etc. I've even done an industry commercial for At and T- haha!)..

10. What direction do you see your music heading into on future releases?
More exploration of textures..

11. What are some bands or musical styles that have influenced your newer music and also what are you listening to nowadays?
I love music like Lunascape from the Haunted Castle.. Doug is into Theatre of Tragedy, The Gathering and The Birthday Massacre.

12. Outside of music what are some of your interests?
There are other things to be interested outside of music? I'm kidding...somewhat...I'm extremely OCD about music..it's my job as well..I'm a vocal coach. However, I do enjoy riding horses, cooking and classic films( when I say classic I mean OLD like pre 1955). I love film noir..like Alan Ladd and Humphrey Bogart films. Very dark and atmospheric and not at all realistic. Wonderful.

13. Any final words or thoughts before we wrap up this interview?
Thank you for taking the time to talk with us! Hope to see you on the road!

Posted by OccultBlackMetal at 3:44 PM