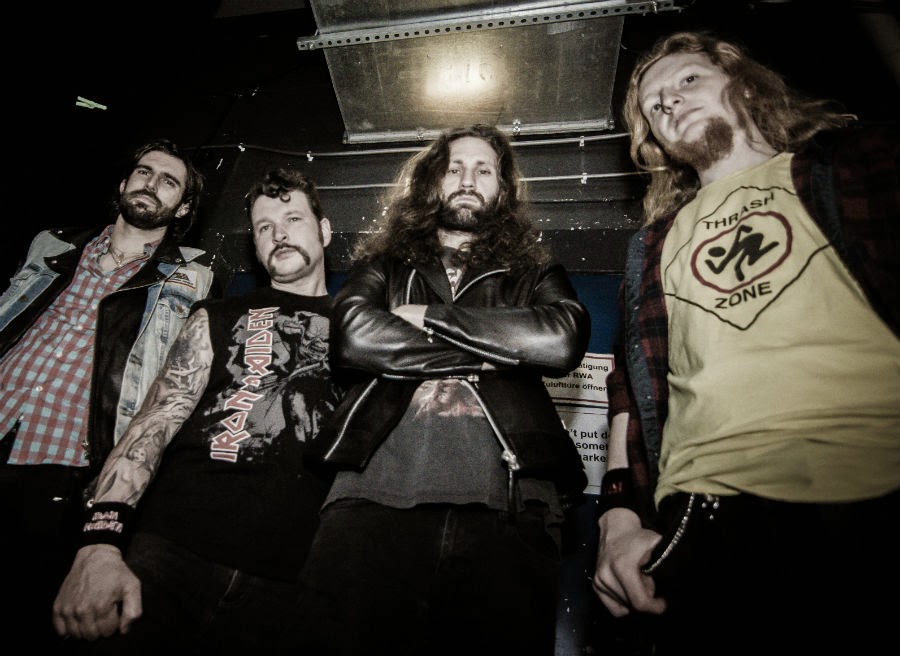 1. For those that have never heard of you before, can you tell us a little bit about the band?
White Mantis is a Thrash Metal band based in Munich, Germany. It was formed in 2012 and in late 2014 the first demo cd was released.

2. In November you had released a demo, how would you describe the musical sound that is presented on the recording?
The foundation of our music is old school Thrash Metal, fast and heavy. Added to this you’ll often find a punk vibe in our songs as well as the occasional weird twist. We like to keep the sound as raw as possible without losing a certain craftsmanship in the music. Thus we deliver a sound that hits you straight in the face but still offers a lot to discover.
The demo, including the artwork, is completely self-produced. In our opinion a lot of today’s productions sound too mechanical so we were aiming for an organic sound in which every instrument has got its distinct place.

3. What are some of the lyrical topics and subjects the band explores with the music?
The lyrical topics range from fictional stories about life in the post-apocalyptic wasteland to more serious issues, usually related to the society we live in. Examples are the effects of life drifting into the digital sphere in the song Singularity or how people tend to blindly trust strong leaders in The Seer.

4. What is the meaning and inspiration behind the name 'White Mantis'?
That’s a creation of the weird mind of our vocalist Matthias, who developed the concept for the band. The White Mantis exists in a bizarre parallel world dominated by chaos and violence after almost complete nuclear annihilation of human societies. Many of our lyrics take place in this setting and use it either for fictional stories or as an allegory to convey sociopolitical messages. In this context the Mantis serves as a totem animal and symbol for the ultimate obliteration of human ethics.

5. What are some of the best shows that the band has played so far and also how would you describe your stage performance?
It’s hard to define your own stage performance. There is no master-plan or anything like that. We just try to keep up with the energy of the music and animate the audience.

6. Do you have any touring or show plans for the future?
There are no plans for a tour at the moment. Maybe after the release of our first full-length album an opportunity might come up but till then we’ll keep playing shows whenever we can get them. Currently there are two shows scheduled for the next three months. Check our website for the latest news.

7. Currently you are unsigned, are you looking for a label or have received any interest?
With the release of our demo we hope to find a label that is interested in us. In 2015 we plan to release our first full-length album, so it would be great to find a label at least for distribution.

8. On a worldwide level how has the feedback been to your music by fans of thrash metal?
So far we can’t complain.

9. When can we expect a full length album and also where do you see the band heading into musically during the future?
As mentioned above we plan to record and release our first album in the course of 2015. The new songs we are currently writing continue the general course of the demo but add more of our own distinctive style to the formula.

10. What are some of the bands or musical styles that have had an influence on your music and also what are you listening to nowadays?
The major influence is definitely the first wave of Thrash bands from the early to late 1980s. Besides the obvious bands from the Bay Area you can hear influences in our music from German bands from that time, especially Kreator. Added to that, bands like Voivod or Anacrusis have left their mark on our sound when it comes to including weird harmonies and twists.
To this day I love all of those early Thrash bands and listen to them frequently. When it comes to the younger Thrash bands Dr. Living Dead are my personal favorites. Besides that I’m pretty much a music nerd in general and will listen to anything that appeals to me, be it different subgenres of metal and rock or stuff that’s got nothing to do with metal at all.

11. What are some of your non musical interests?
Actually there is not much worth mentioning besides music. Skinning mice to sew fancy coats is something everyone in the band enjoys.

12. Before we wrap up this interview, do you have any final words or thoughts?
Support the underground.

Posted by OccultBlackMetal at 8:57 AM