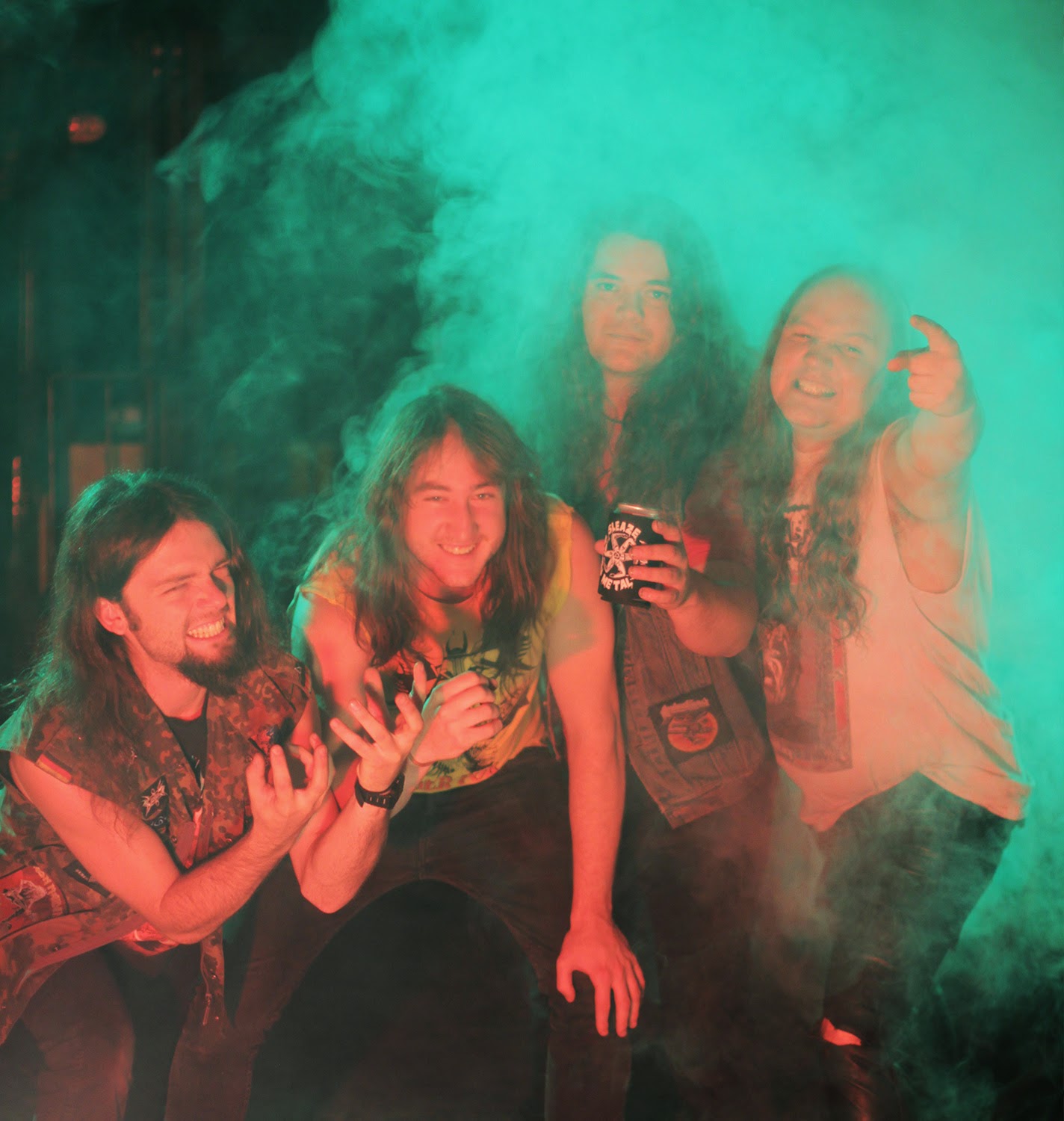 We were formed in 2008 as a cover band under the name, ‘Dethblo’. Soon started writing our own material and gigging. The goal is to keep it aggressive and interesting.


2.You have an ep coming out in April, how would you describe the musical sound that is presented on the recording and also how does it differ from the stuff you have released in the past?

I’d say this release is a little more live sounding that our last one, ‘Prognosis Negative’ The process this time was much quicker where we were able to record quick and together. For our last album we recorded bits

at a time and the whole process from start to finish was literally more than 6 months, (mostly due to poor contact from our producer). I think the music on that album has developed more as well. The song structure

on the new material was a little more thought out and I think there’s more of a death metal influence to these songs.


3.Originally the band started out playing covers, what was the decision behind writing your own songs?

It just came naturally. Our first original song was, ‘Master’s of War’, which we threw into our cover set early on. It didn’t take long to realize that if we can play this kind of music we should be able to write it too. When you can get a finished product that came from your own work, that’s when it actually becomes rewarding.


4.The band has been around since 2008 but waited until 2014 to release any music, can you tell us a little bit more about the first 6 years?

Since we formed it’s been a slow process. Only since we released ‘Prognosis Negative’ have we received much attention outside of Salt Lake City. We relocated from Logan, UT to Salt Lake City in 2009 and some of the original members weren’t that into it taking it to the next level. It took a long time to get the ball rolling and to find members that actually gave a shit. Once we finally had a line-up that was into it and sincere about the music, things started to move a lot quicker.


5.What are some of the lyrical topics and subjects the band explores with the music?

Prognosis was a bit scattered as far as subject matter. We have songs about everything from horror movies to H.P. Lovecraft stories as well as more serious topics like war, eugenics and the confusing nature of humanity. For the new album there is no large theme or concept but by the large we’ve shifted from random horror/fantasy inspired songs to more real-life and philosophical based topics.


6.What is the meaning and inspiration behind the name 'Deathblow'?

Well it’s so simple and it basically sums up the bands sound in two combined words, we thought it was perfect. Let’s just pretend the name didn’t come from a popular 90’s based sitcom…

We’ve played a lot of shows in Salt Lake City over the years and have hit the road three times now for short tours. Some of the more fun ones have been small house shows and all ages venues. The younger crowds just give off so much raw energy. We were lucky enough to open for Kreator and Accept in Salt Lake City when they toured a couple years ago. It wasn’t our best performance but those our two of our favorite bands of all time and probably our biggest show. We try to keep everything tight live but like to approach it with a punk edge. We certainly rehearse everything a certain way but don’t mind changing it up during a show. We definitely feed of the energy of the crowd. If they’re going wild and into it that will always affect how hard we hit it.


8.Do you have any touring or show plans once the new ep is released?


9.Currently you are unsigned, are you looking for a label or have received any interest?

We would definitely be interested in getting signed. So far we haven’t had too many labels hit us up. We are proud that we’ve done everything DIY up to this point but we’ve learned that the business, licensing, distribution and pressing side of things can be incredibly overwhelming, especially on your own dime.


10.On a worldwide level how has the feedback been to your music by fans of thrash metal?

Just in promoting this E.P. it’s been amazing so far. Clawhammer PR has played a major hand in getting our name out there. We’ve been getting great feedback and a lot of people who are interested in picking up the album when it comes out which always pushes us to take it further.


11.Where do you see the band heading into musically during the future?

We are definitely a band that sticks to our principles and roots. We are always going to strive for that raw, aggressive, thrash edge but I wouldn’t be surprised if you hear a little more death-metal influence in the future.


12.What are some of the bands or musical styles that have had an influence on your music and also what are you listening to nowadays?

We have always been really inspired by thrash bands that bridge that gap between death/thrash/punk and just play the craziest music they can without losing sight of songwriting. Bands like Gwar, Kreator, Sodom, Pestilence, all examples of bands that have inspired our sound.

Buy the new album when it comes out April 21st!
https://deathblow1.bandcamp.com/
Posted by OccultBlackMetal at 10:59 AM