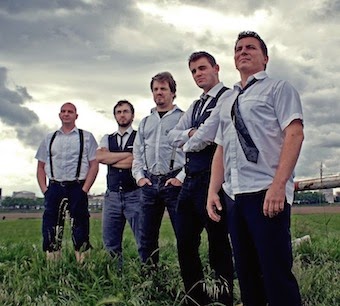 There are still people that never have heard of us before? Impossible!
We are Premortal Breath an unknown and unsigned underground band from Germany formed in 2010. We play classical but also modern Heavy Metal with some Hard Rock elements. After we finally found our perfect line up, and yeah there were some challenges to find it, we decided to record our hard work from the past years to share it with the people around the world. We achieved this also with the help of our very best fans and friends who supported our crowd funding project. Thanks again so much!!!


2. Recently you have released an album, how would you describe the musical sound that is presented on the recording?

Yeah, the album is called “THEY” and contains 8 really great songs.
Well we were in contact with some recording studios in Germany to check the price level against the quality. At Logischdenker Recording Studios we had the chance to record a sample song to get an overview about the work of Logischdenker´s Bastian Knochel. He immediately convinced with the results and the work with him was very busy but funny and productive. So finally we could reach a sound that is typically for old school Heavy Metal but still modern. Put the CD in your stereo, turn up the volume and enjoy it.


3. The band has been around since 2010 but waited until 2014 to release an album, can you tell us a little bit more about the first 4 years?

The first 4 years were really challenging in finding the right musicians. It´s not only enough for us if a candidate can play his/her instrument really well but he/she has also to fit in the band on a personal level. Some personal reasons also made former band members leaving the band. So it took 3 years to find our perfect and solid line up and after 4 years the album was realized.

Like you can read in our booklet all of our lyrics were written or supported by our lyricist and trusted friend of the band Oliver Matthes who also played the guitars at the very beginning. So the lyrics contain whatever comes in Oli´s mind after a weekend of watching horror or sex movies.
Bloodshed, murder, zombies, drugs and sex but also assisted suicide.


5. What is the meaning and inspiration behind the name 'Premortal Breath'?

It means the last breath before you die.
We had a few name changes and with Premortal Breath we had our first gigs so we decided to keep it and never change the name again. It is unique and it sounds funny how Germans are pronouncing it.


6. What are some of the best shows that the band has played over the years and also how would you describe your stage performance?

The smallest gigs were the best for us to be honest. We had a gig in a very small location in Ludwigshafen with 2 other bands. Only a hand full of people was standing in front of the stage but made party as hell. It was really great to interact with them and be part of them.
Regarding our stage performance we still have to learn and get more experienced.
It is getting, at least from our point of view, better and better. We have our very special live outfit which you can see on the pictures of the booklet. Nothing with chains and leather as well as we all have short hair or no hair at all (Potti).
So more untypically for Heavy Metal but who cares? And we don´t care about those who do!

Yes of course! End of 2014 was a bit exciting. End of August I became father. Just a few days ago at the beginning of December our guitar hero Tobias became father for the second time as well. So live shows had to wait as our private life is still the most important thing for us.
In 2015 we´ll be back on stage. In March we will open the Ground Force One Festival in Leonberg and some other gigs will follow for sure. We´ll keep you updated on our Homepage and Facebook site.

8. Currently you are unsigned, are you looking for a label or have received any interest?

Not yet. For sure the wish of nearly every musician is to sign a contract of a major label and get rich and famous. We all do have a real life and responsibility. We have a job and families and really great friends.
Will we sign a contract? Hard to say but we guess not.


9. On a worldwide level how has the feedback been to your music by fans of metal?

That´s easy. They like us or they hate us. There´s nothing in between.  We received some low rated reviews from the UK and Germany but some high rated as well from around the world. So we concentrate to the people who likes us and our style.


10. Where do you see the band heading into musically during the future?

We´ll keep our style. That´s what our true fans wants to listen to and they´ll get it.
Further plans are to enter the stages in Germany and hopefully internationally.
It would be really great to get the chance to play abroad someday.
Moreover we are planning another album to be released within the next 2 years.

11. What are some of the bands or musical styles that have had an influence on your music and also what are you listening to nowadays?

Of course we all grew up with legends like Metallica, Megadeth, Anthrax, Manowar, Judas Priest, Dio, Iron Maiden and the last few years we are listening to and were influenced by bands like Disturbed, Trivium, Avenged Sevenfold, Slipknot, In Flames and many more.

12. What are some of your non musical interests?

Family comes first for every one of us.
Also some of us have pets at home as we have a big heart for animals.
But also classic US cars and old motorcycles get our interest.

13. Before we wrap up this interview, do you have any final words or thoughts?

We want to welcome everyone to join the Premortal Breath army. We also support Oxfam America and PETA with our sales so if you will buy our album you will do something good as well. See our videos on youtube.com for more information.

You can find us in the web as well as on all known digital online stores.

Posted by OccultBlackMetal at 3:25 PM