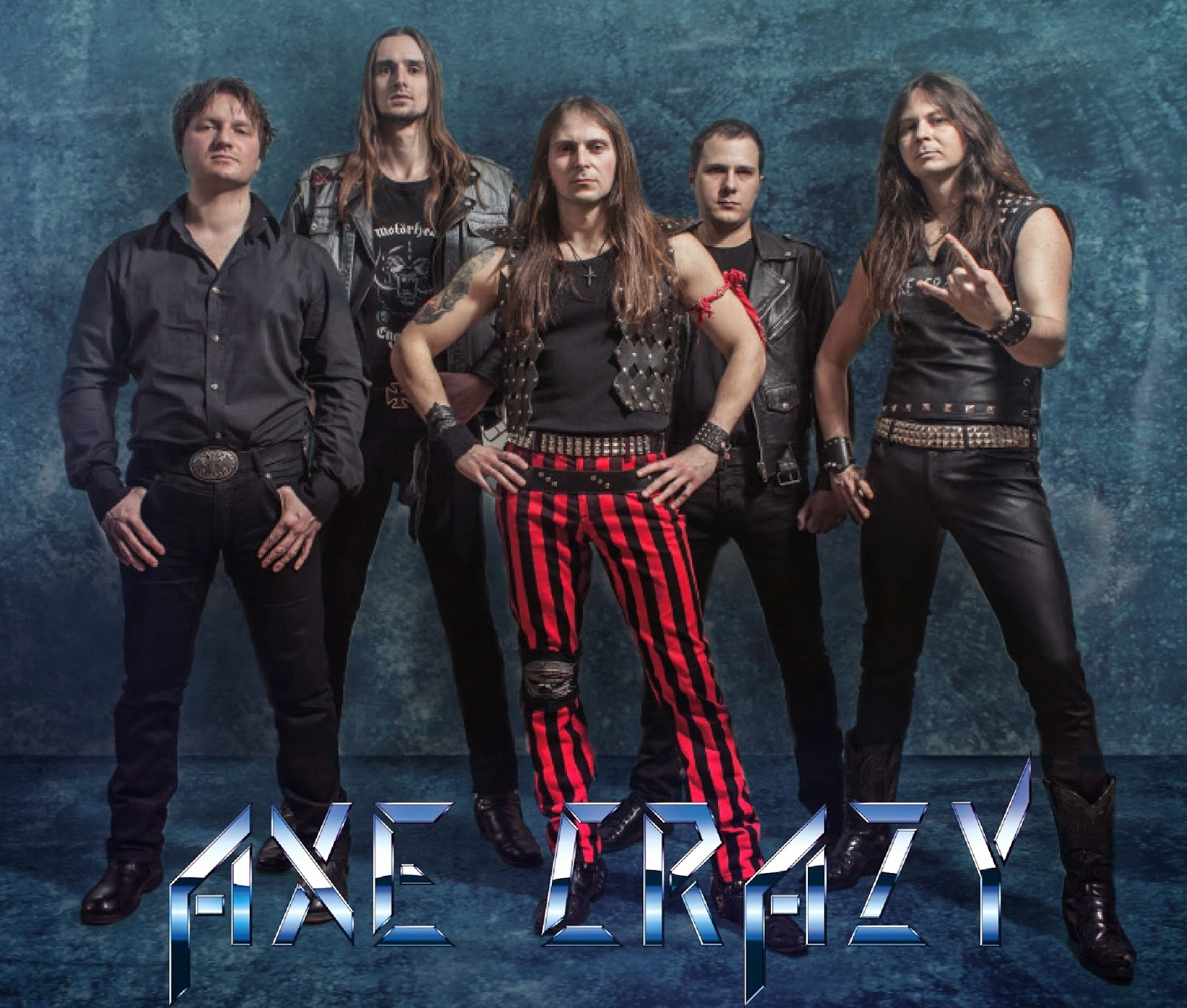 So, Axe Crazy was formed in 2010 i polish town Lędziny. As you know we chose it’s name from a Jaguar’s song. We play traditional heavy metal so we are associated with the movement called NWOTHM. The Axe Crazy line up is: Michael Skotnicki – vocal, Robson Bigos – guitar, Andrzej Heczko – drums,  Kamil Pieściuk – bass, Adrian Bigos – guitar.

2. In April you had released an ep, how would you describe the musical sound that is presented on the recording?

Our music is inspired by classic heavy metal from the 80s, so we tried to also sonically refer to this period and get the typical oldschool, and it worked out what we can hear on the EP. But it was our first time in a professional studio J

3. What are some of the lyrical topics and subjects the band explores with the music?

We have a special theme for the lyrics, we write about what we are captured and just come to mind, but rather they are not lyrics about love ha ha J The inspiration sometimes is life itself, sometimes theme of fantasy or sci-fi.

4. I know that the band name came from Jaguar song, how does this name fit in with your musical style?

Our style is rather classic heavy metal, but fairly fast, with high tempos, just like for example Jaguar’s "Axe Crazy", so we thought the name would fit us well. By the way, we're a little crazy, so everything integrates haha J

We did have some cool concerts, the best are always the ones where is a lot of people and hot fun under the stage. One of the best was definitely our performance in the Mega Club in Katowice, was perhaps the most professional in terms of the entire luminaire and the club where we were not once near the stage at concerts of the world's top hard rock and heavy metal bands, so play there was a real honor for us. Our stage performance as the music itself also refers to the best times of metal, so it is important to “fire” and movement on stage, appearance of the band and all concert design and effects like lights, smoke, etc.. Obviously we aren’t a band of world-class and we have a limited budget, but we try to do everything to make our concerts even in the slightest resemble the best metal performances.

We play concerts as often as possible, and of course we plan them as much as possible, but for now they are rather performances in the vicinity of your place of residence. We'd love to play concerts in Europe or even around the world, go on tour with a band as a support, but this unfortunately need the support from the label or concert agencies.

7. Currently you are unsigned, are you looking for a label or have received any interest?

Actually we signed a contract for the release of our EP “Angry Machines” on vinyl.

8. On a worldwide level how has the feedback been to your music by fans of metal?

It seems to us that the EP collects pretty good reviews and we guess the fans of classic metal like it, at least in most cases. Several record labels also interested in us, so we guess it's not bad :)

9. When can we expect a full length album and also where do you see the band heading into musically during the future?

Now we working on material for a full length album, the work goes quite well and in the spring we want to again enter the studio and record a full CD. We will stay with our style, which is the classic heavy metal.

Like we said, our inspirations begin at the hard rock of the 70 and end on heavy / power metal of the 80's and 90's. Bands that inspire us are Iron Maiden, Judas Priest, Helloween, Blind Guardian, Kiss, Black Sabbath, Thin Lizzy, and hundreds of other classics metal bands. Currently we listen music from the 70s and 80s, but also many new bands inspired by those times, that is belonging to NWOTHM.

Thank you very much for this interview and interest in our music! Greetings to all fans of heavy metal and pretty girls ha ha ha :) Of course invite to our shows and on our Facebook page (www.facebook.com/axecrazyband), where you will find informations about our concerts and through which you can order our EP.
STAY CRAZY!
\ m /

Posted by OccultBlackMetal at 8:22 AM