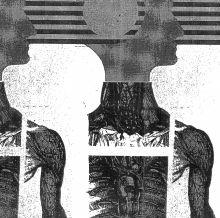 Distorted  drones  along  with  some  underground  industrial  elements  start  off  the  album  along  with  the  bass  guitars  being  used  as  a  lead  instrument  as  well  as  mixing  the  acvant  garde  and  experimental  side  in  with  the  heavier  sections  of  the  music  and  after  awhile  aggressive  screams  start  to  make  their  presence  known.

Deafkids  plays  a  musical  style  that  takes  d  beat,  punk,  extreme  metal,  industrial,  experimental  and  avant  garde  and  mixes  them  together  to  create  something  very  original,  the  production  sounds  very  dark  while  the  lyrics  are  written in  Portuguese  and  cover  philosophical  themes.

Posted by OccultBlackMetal at 7:06 PM