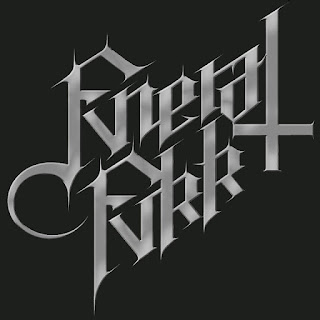 1.For those that have never heard of you before, can you tell us a little bit about the band?
FVNERAL FVKK is just a simple ensemble of some sick little christian priests who follow the ancient christian tradition of abusing their little sheep in the name of God. You know, stuff that happens every day in catholic schools, churches and temples every day. It is also about the sometimes very, uhm, interesting sexual preferences of some christian believers... a crucifixion fetish for example, isn't that cute.


2.Recently you have released an ep, how would you describe the musical sound that is presented on the recording?
It is epic traditional Doom Metal, just without the operatic silliness that sometimes is immanent in this sacred genre. The lyrical content may be foul and twisted, the music however is mournful and heavy, as Doom Metal should be!
The lyrical side may have some very dark side of irony to it. But the music is straight forward pure Doom Metal, with no irony whatsoever.

3.Most of the band members have a background playing black metal and doom/death but with this band you go for more of a traditional epic style of doom metal, what was the decision behind going into this direction?
We do not know. We just wanted to do that. After more than 15 years of Black Metal and Death Doom, it was just time to do something else musically as well.


4.What are some of the lyrical topics and subjects the band explores with the music?
The christian church has a very restricted view upon sexuality, which results in sometimes very bizarre sexual abductions and activities, which in turn is pretty ironic, as the most sexually restricted institution spawns the most twisted perverts in society. This is what we explore. On the EP, all the lyrics are fictional, even though they are based on actual real phenomenons. On our next full length album, we even do not have to be fictional again. There is so much perversion to be found in the history of the church, that there is no need for fiction.


5.What is the meaning and inspiration behind the name 'Fvneral Fvkk'?
Well, it describes the attitude of this band quite well, don't you think? That's all it means.


6.What are some of the best shows that the band has played so far and also how would you describe your stage performance?
I am not going to smack you for not doing your homework and say straight away that Fvneral Fvkk did not perform live yet. We have shows booked for 2018, though.


7.Do you have any touring or show plans for the future?
As this band is merely a project, a full tour is not that likely, although not completely out of the possible. We will play a German festival in February next year, and probably stick to selected one-off shows here and there, whenever our schedules allow.


8.On a worldwide level how has the feedback been to your music by fans of doom metal?
It was mainly very good. For a band coming out of the blue with no live-shows to date, the EP is selling pretty well. Not as much as our main bands of course, but under the given circumstances, the sales are pretty good.
The feedback was mainly great. But of course there are some self-proclaimed Doom Metal elitists who pissed all over us because of our antics and lyrical contents. They are miffed because they like the music, but are not allowed to admit that because our image is not true doom. Or they feel so above such contents that they consider this band as an infantile fun-band. Some of them even refused to listen to the EP, just because of the band name. Being active in the Doom scene for over a decade, we expected that as soon as we formed the band. So it is not a problem for us at all.


9.What is going on with some of the other bands or musical projects these days that some of the band members are a part of?
Fäulnis have released their 3rd full-length early this year and played a tour. They are still doing promotional shows for the record, which was perceived quite well, I think. Ophis are going release their 4th full-length in October.

You can expect a full-length album. Yes. But when – I do not know. The other bands come first. I can tell you that we are working on the material for the album, and some songs are half-finished. But we will take the time we need. So it could be next year, it could be in five years. We do not know.
Musically, it will not change that much I guess, though it will be a little broader in spectrum as the EP. Naturally, as there will be more songs.

Influences for Fvneral Fvkk are different for each band, though I can tell you that Solitude Aeternus, Funeral, Candlemass and the very underrated Tristitia were influential for all of us.
We listen to very different kind of stuff, at this moment I listen to a lot of Thrash, like Nuclear Assault, old Megadeth and Anacrusis. Not very Doom at all, but there will be Doom times again for sure.


13.Before we wrap up this interview, do you have any final words or thoughts?
The preacher Victor Manuel Rivera once said: „Freedom is not doing what we want, but doing what we should“. Now, if this is not hitlerian logic, then what is?
Yes, thus they are, these holy fuckheads preaching God's name! By the way, the same man also said: „the dirtier your bible, the cleaner your heart“. Oo-ee-oo!

Posted by OccultBlackMetal at 9:42 AM