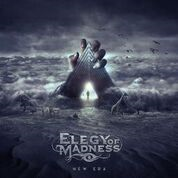 As  the  album  progresses  stringed  instruments  can  also  be  heard  in  certain  sections  of  the  recording  and  the  music  also  brings  in  a  great  mixture  of  slow,  mid  paced  and  fast  parts  while    later  songs  also  introduces  clean  playing  and  acoustic  guitars  onto  the  recording  and  all  of  the  musical  instruments  have  a  very  powerful  sound  to  them.

Posted by OccultBlackMetal at 9:07 PM