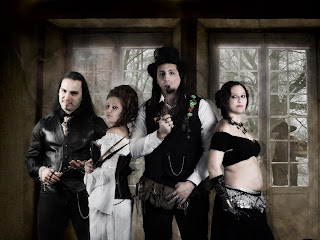 1.Can you give us an update on what has been going on with the band since the recording and release of the new album?
A: Of course, we played in live shows, than we had some contact to allows us will play in the future outside Italy, than we try to compose some new stuff.

2.Recently you have released a new album, how would you describe the musical sound that is presented on the recording and also how does it differ from the stuff you have released in the past?
A: Formally form the first album to this one I can grown as musician and as composer so I organized better the songs and lyrics.
M: I think we can’t label our style and sound, there are many influences in this new album, but I agree with Mr. Blut, we are mature in organization, in quality of sound and production but we have more and more to do!

3.What are some of the lyrical topics and subjects the band explores with the newer music?
A: By now mental illness, but not the “famous ones”, just something strange and unusual. I know it’s strange to say “something unusual” in mental illness but it’s what we’re doing now.
M: mental illness, in particular, but don’t forget about personal experiences, nightmare and fears.

4.The new album was name 'Inside My Head Part II", is there a concept going on with both of the albums?
A: As I said here up the concept around inside my mind party I and part II it’s a trip around some weird mental illness; and some “Actors” around psychology and psychiatry as Sigmund Freud, Cesare Lombroso and CG Jung.

5.What is the meaning and inspiration behind the name 'Blut'?
A: Blut is the german word for Blood. I’m half Italian and half German Swiss, so I want to use part of my blood. In the same time I want to describe who we are with an old anthems “blood doesn’t lie” in german “ Blut lügt nicht” so this is the meaning of Blut.

6.Originally the band started out as a solo project, what was the decision behind forming a full line up?
A: Formally because I think if you can find someone mad like you, you can enjoy and build something great. In the second thought because a solo project have less chances to perform own music on stage.
M: All started, for me, as a game, a sort of challenge with myself, or many years I sang only symphonic metal, so when Alessandro asked to me to be a guest in the first album I decided to do something different; subsequently he asked to me to become a member of Blut and here I am!

7.What are some of the best shows that the band has played so far and also how would you describe your stage performance?
A: The best Blut’s show?! For me the next one. Every show is part of a “growing monster” so the new one will be the best of the last. Our show is a mixture of Gran Guignol flavor with a bit of steampunk attitude and a lot of lights and gothic sound.
M: I think that “Madness” is the right word to explain or stage performance, we are actors of a madness theater.

8.Do you have any touring or show plans for the future?
A: The next gig will be at Drakkar rock festival 26/08/2017 and for the Fall we still organizing now.


9.On a worldwide level how has the feedback been to your music by fans of experimental, industrial and metal?
A: We have a great feedback from the streaming and digital way, a little less for the physical version. But it’s summer and I know too many metalheads and dark have in mind festivals like “Wacken”, “Summer breeze”, “M’era luna” and so on; the band and me will wait in Fall for more feedback. In any case we have some good feedback from some zine.


10.Where do you see the band heading into musically during the future?
A: I think, we will play our music in great festivals, and bring our space in the music history and biz. Yes It’s a log hard road, but I’m not scare of it.
M: We believe that dreams will came true, so we’ll be wherever we want to be!


11.What are some of the bands or musical styles that have had an influence on your music and also what are you listening to nowadays?
A: I have too many influences, for example: Type O Negative, TiamaT, Samael, Moonspell, Oomph!, Suicide commando, Lucyfire, Blutengel, The cog is dead, Abney Park and Pain.
More or less a lot of dark wave, elettrodark, country, industrial, some old glam metal and sometimes binaural sounds.
M: As I said before, I come from a different kind of music, but Alessandro is showing me “new bands” and remembering me old love like theatres des vampires

12.What are some of your non musical interests?
A: Until last June I made reviews and interviews for some zine, but now I have no much time, because following Blut it’s an hard work. Otherwise I’m one of the founder of “Steampunk Italia” so I’m little bit addicted about Steampunk and I made my own Steampunk stuff for my personal outfit and sometimes for others. I play some skirmish table game like Malifaux (a western steampunk skirmish game) and I read too many books form several topics: from magic to serial killers and from fantasy to sci fi.
M: I’m an historical re-enactor, I’m a partner of an association “Associazione Culturale Commenda San Giorgio” and I collaborate also with “La Masnada Della Campagna Soprana”.
I like to do DIY, stay with animals and in nature, trekking and what else… do everything makes me feel alive!

13.Before we wrap up this interview, do you have any final words or thoughts?
A: Thank you so much for your time, Thanks to your readers and remember: Follow us, Stay Insane, Blut lügt nicht (Blut doesen't lie).
M: Don’t be afraid in madness, it could be fantastic!
Follow us in the net:
on Facebook: https://www.faccbook.com/Blutband
on our website: http://blutband.com
on our youtube channel: https://www.youtube.com/channel/UCGuOtWI69K-ixCW4RdgC__w
on our bandcamp: https://blutmusic.bandcamp.com/
on our reverbnation: https://www.reverbnation.com/blut7
And don't forget to buy our cd

Posted by OccultBlackMetal at 6:55 PM