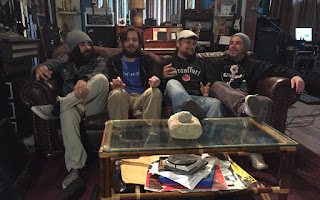 1.       For those that have never heard of you before, can you tell us a little bit about the band?

Christopher Porter (Bass/Vocals): "We're great friends that are very much different from each other, yet somehow very much the same. United to achieve a dream"

Stephen Jester (Drums): “Like Chris is saying, we’ve all got different interests but we’re all music lovers first and foremost.  We dig music, period.  So over the years, BOUDAIN has been an expression of our many different music influences, however subtle or apparent they may be. Right now, we’ve got a strong stoner rock vibe, but In 10 yearswho knows, we may sound slightly different.  Also, what we're doing is very laid back. We take our time.”

2. So far you have released an ep and a full length, how would you describe the musical sound that is presented on both of the recordings and also how do they differ from each other?

CP: "on the EP we just wanted to make a recording of old songs, on way of the hoof I personally was eager show growth from the EP"

SJ: “Chris hit the nail on the head. The EP was the effort to document some old tunes. ‘Way of the Hoof’ is largely all new.”

3. The band has been around for 10 years but so far has only put out 2 releases, can you tell us a little bit more about the gap in between releases?

CP: "Stephen has said before, we take our time, if you want more music from us, pay us"

SJ: “Over the years, we’ve been in various projects. BOUDAIN for the first 4-5 years was purely a live band. In 2013 we decided to start recording the material. Then after the EP was out, we worked on the next release which we actually knocked out pretty quick. We just waited a little bit to release the new one.”

CP: "the lyrics speak for themselves I think, you decide what they mean for you, that's how art is right?"

SJ: “This is Chris and Brian’s ballpark but so far the general topics have been about hard-times and space flight, but there’s way more to it. I’m not giving it justice.”

5. What is the meaning and inspiration behind the name 'Boudain'?

CP: "just as with the lyrics, if you may find a meaning to you then that's what it is, to you that is"

SJ: “BOUDAIN is named after a Cajun sausage dish we have here in Louisiana and East Texas. The Louisiana way to spell it is BOUDIN (which was originally French), but we use the Texas spelling BOUDAIN. I’m sure that pisses off a lot of South Louisiana people. It’s basically rice, pork, and seasonings wrapped in a sausage casing. BOUDAIN is good.”

6. What are some of the best shows that the band has played so far and also how would you describe your stage performance?

CP: "we opened for Hellyeah that went very well, and also we opened for The Sword which was quite well received by the audience, our performance will have people traveling within their own minds uncontrollably"

SJ: “yeah, those bigger shows that we opened are pretty memorable for us, just due to the response we got. Our live show is pretty organic. We always add variation to the live versions of the songs. I try not to play a song the same way twice.”

7. Do you have any touring or show plans for the new album?

CP: "see the bandcamp page for the sought after info"

SJ: “Yes, we’ve got a small Midwest tour we’re coordinating for mid-to-late July, roughly 10 dates. One of these shows will be the Wichita Psych Fest.  I’m sure we’ll be planning more of these runs for Fall/Winter 2016.”

8.On the new album you had done a cover of Blue Oyster Cult's "Godzilla", what was the decision behind during your own version of this song?

CP: "the song just comes from us as though it is meant to be, I think we play it well"

SJ: “Many bands have done this song. Fu Manchu did the down-tuned version first, and honestly our version is a clear nod to their version. But we definitely added our own spin to it.”

9. Currently you are unsigned, are you looking for a label or have received any interest?

SJ: “We’re absolutely looking for a small label to press our releases, even if it’s a very limited run. We just want to see this stuff in a quality physical form but I’m sure you’re aware, it’s very expensive, especially when all the cost is on the band. We would love some label support. Haaahahaha. So far haven’t received any interest though.”

10. On a worldwide level how has the feedback been to your music by fans of stoner and doom metal?

CP: "the feedback has been very positive as far as I know"

SJ: “Very well received in the Scandinavian regions, as well as the UK, Germany, France, and Spain. We would love to be able to go over there.”

11. Are any of the band members also involved with any other bands or musical projects these days?

CP: "not to my knowledge, however I'm not against a good jam with close friends or family from time to time"

SJ: All of us used to be a lot more active in other projects, but right now it’s just BOUDAIN.”

12. Where do you see the band heading into musically during the future?

CP: "we just do what we do, it will be whatever comes out of us"

SJ: “yeah I second this. We just jam without the headlights on and drive.”

13. What are some of the bands or musical styles that have had an influence on your music and also what are you listening to nowadays?

CP: "my ears are open for whatever you got"

SJ: “I’ve been digging a lot of jazz nowadays, Kamasi Washington, Davis, Coltrane. A lot of electronic music, Carbon Based Lifeforms is a huge one for me but I love ambient music in general. Hip-hop: Dead Prez, Wu-Tang (Ghostface, Method, GZA, especially), Early Outkast, Run the Jewels is fantastic. And of course classic stuff like Sleep, Fu Manchu, Clutch, Late Puny Human, Earthless, and the others where we pull obvious influence from. I’m waiting on another Om album from Al, Emil, and Rob. I Love those dudes.”

14. What are some of your non musical interests?

SJ: “Home brewing and craft beer in general, video editing, politics and how we have the power to change things that aren’t rad, and TRAVEL.”

15. Before we wrap up this interview, do you have any final words or thoughts?

CP: "buy the album, come to a show, if you can break the code"

SJ: “Thank you very much for asking questions. We hope to do it again soon.”

Posted by OccultBlackMetal at 12:48 PM