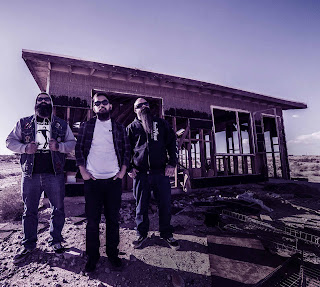 We have been off for Quite some time when we returned home after touring the west coast I feel very ill, and was hospitalized after which I was sent to an emergency surgery in order to save my life, I was bedridden for 10 weeks. after healing we have played a couple festivals and I designed the Album Art and we made the music video for Levity, preparing to release Shaman's Path of the Serpent. We have also already been writing our next album.The band has also  been preparing for our summer tour that's headed toward the Maryland Doom Fest. Probably the band's biggest show.

2.You have a new album coming out in may, how would you describe the musical sound that is presented on the recording and also how does it differ from the stuff you have released in the past?

It is a spiritual Journey meant to represent the path through death to rebirth, musically we wanted it to be very heavy but also very drony and melodic. It is very different than what we have done in the past we are growing together and creating our own sound.

3.Some of your lyrics deal with Shamanism, Occultism and Metaphysical stuff, can you tell us a little bit more about your interest in these topics?

I am a spiritual person, I have always been plagued  with certain health issues. Being ill at times and spending time alone I found myself drifting into thoughts of the spirit world and the power of our mind. I have found with only a change in thought I was able heal myself. After this realization I began to contemplate the idea of life being a dream or a mere illusion. Realizing I was not my skin but my soul I began to learn to walk between worlds experiencing  multiple planes of existence simultaneously . I found, light, darkness and everything between. I do not believe in good or evil only energy. I also believe there is far more to existence than what we currently believe is reality.


4.What is the meaning and inspiration behind the name 'Atala'?

I named the band after the novella, Atala by François-René de Chateaubriand. It's about an American settler who fell in love with the indigenous way of life and a more natural way of living. He left his society and religion and lived among the so-called "savages" in beauty and nature. Atala is a look beyond dominate society and a longing to be one with nature. A major, if not the biggest, direct influence in the band's existence which stems to the individualistic terms which each member live their lives.

Our stage performance can be described as very focused that emanates a massive amount of feeling. We don't really talk in between songs, those are just normally filled with feed back. I would describe our stage presence as intimate. It feels as if we're playing to just one individual. We don't have a stage show we are only into music not hype or showmanship, we just get on play and don't say a word, our music speaks for us.

6.Do you have any touring or show plans for the new album once it is released?

Our summer tour is in support of "Shaman's Path...."


7.Currently you are unsigned, are you looking for a label or have received any interest?

We're very undecided on this. More or less, we're just waiting for the right person and right time to really seize and opportunity as such. We have had interest in both management and labels all of which were not good fits. we have the ability to self release so the idea of being in debt to a label just sounds stupid

8.On a worldwide level how has the feedback been to your music by fans of stoner and sludge metal?

We get a positive response with in the Stoner and Sludge circles, which is cool because we like that style of music, just good ol rock and roll.

9.What is going on with some of the other bands or musical projects these days that some of the band members are a part of?
we are here to talk about Atala

I see us getting heavier musically and more tribal but vocally very soft and entrancing.

11.What are some of the bands or musical styles that have had an influence on your newer music and also what are you listening to nowadays?

We're all inspired by different genres and styles of music, I guess you could say it depends on what you catch us listening to at the given time. For me, I have been on the more mellow side of heavy.

Atala is not the SAME!
www.atalarock.com
Posted by OccultBlackMetal at 1:56 PM