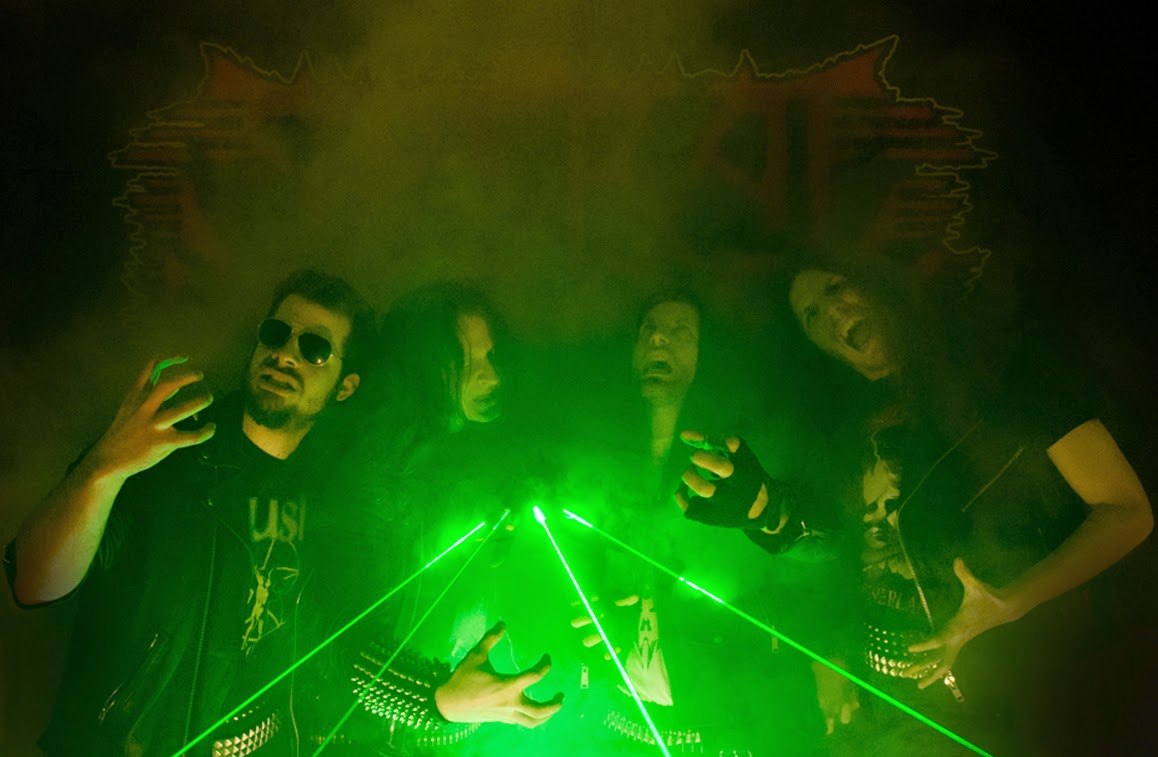 1. Can you give us an update on what has been going on with the band since the recording of the new album?

Recordings have been finished since late December and during this period we have been working on all the other aspects such as cover art-work details, layouts, mix mastering and all those time consuming tasks. Thence we are practicing and rehearsing all the details for our upcoming shows. You can tell that we have been pretty busy these days.

2. You have a new album coming out in March, how would you describe the musical sound that is presented on the recording and also how does it differ from your previous demos, promos and ep's?

We have been trying our best to evolve through every step both musically and optically. There’s a huge difference between our previous works and this one. We have achieved to develop both the musical and lyrical level. There’s been more focus on the arrangement side of the songs and we have become better players. Nevertheless we find us more tight as a band.

As far as music concerns, think “Illusions...” as a boosted version of our previous works. The music remains dark and heavy, but there are lots of other elements added. You can feel all of this speed/heavy metal elements coexisting with some magic of prog rock through the perspective of Sacral Rage. It is as heavy and in your face as fuck. The production is much more killer and heavy. Truth is that the record needs multiple times to get into it.

The Promo we did last year was basically the precursor of this album and it was a test drive for finding the right label. “Deadly bits of iron fragments” on the other hand was made in a very short amount of time but actually it did its work. Our first promo was just a recorded rehearsal so I can’t really compare it with the next records.

Our lyrical topics have to do with horror, supernatural, dark fantasy, soul searching, forbidden religions and they perfectly match with our dark, aggressive, technical and paranoid music.

4. What is the meaning and inspiration behind the name 'Sacral Rage'?

We wanted an aggressive and dark meaning for our name. The “sacred” rage of our music shall fall upon to sinner’s ears as the ultimate judgment. That’s how our name sounds. In a specific manner, you can analyze our name in two parts. Sacral refers to our technical complexity while rage refers to our aggressiveness, speed and paranoia.

Terrifying as HELL. Imagine a war occurring on stage. Spikes, leather, smoke, bullets and LASERS. Outworld Screams, pounding rhythms, lethal notes flying all over the place. Definitely live shows is one of our strongest weapons.

We’ve done many damages on stage but some of the highlights are: supporting the mightiest of the mighty JAG PANZER, supporting classic legends Skyclad as well as opening for PHANTOM X. Most of the rest gigs took place with local brothers from which we will touch upon the one with our best mates CONVIXION and WRATHBLADE. Also we have participated in UP THE HAMMERS and POWER OF THE NIGHT festivals.

Our forthcoming shows are going to be far more passionate since our madness is just getting bigger and bigger.

6. Do you have any touring or show plans once the new album is released?

Till now, confirmed shows are: Supporting for “Soldiers of Steel” SANCTUARY in their Athenian appearance, KEEP IT TRUE (Germany) and HEAVY SOUND (Belgium) festivals are also the next war fronts.

7. You have also done a Mercyful Fate cover, what was the decision behind doing your own version of one of their tracks?

This cover was a part of a compilation GREEK METAL HAMMER did for celebrating its 30 years of existence. Every band that participated on that cd had to cover a song from a record that was released 30 years ago. They picked us for “Don’t Break the Oath” and since we obey our King, we didn’t give it another thought.

8. On a worldwide level how has the feedback been to your music by fans of heavy, power and speed metal?

The thirst for something new and at the same time old-school gave us the opportunity to catch metalheads’attention worldwide. Since the music we play has been lying dormant since the early 90’s, people that come in touch with our music fulfill their nostalgia through our madness for reviving one of the greatest genre of metal ever played.

9. What is going on with some of the other bands or musical projects these days that some of the band members are a part off?

Restless spirits have restless urges. There are lots of things going on. Expect to hear news from some of them soon enough.

10. Where do you see the band heading into musically during the future?

Too soon to tell. Of course we won’t change our style but as I see it, at least for now, we will continue adding more elements and evolving. There would be no reason to repeat ourselves.

11. What are some of the bands or musical styles that have had an influence on your newer music and also what are you listening to nowadays?

More or less listen to the same old shit. The influences are the same as on “Deadly bits...” but now we had more time to express them more. From Death metal and Punk, to Prog Rock. What comes out of our speakers is a patchwork of frequencies.

12. Does Occultism play any role in your music?

Occultism as an atmosphere is definitely one of the most suitable elements having to do with metal. We do like many bands that had it in their music. As far occultism as a trend, NO, we are not such kind of a band. We don’t follow any trends.

13. What are some of your non musical interests?

They vary, depending on each of us. Work out and Gym, Guns, Motorcycles, Astronomy, History, Archaeology etc.

14. Before we wrap up this interview, do you have any final words or thoughts?

Thank you so much for giving us the opportunity to show you how things are through the eyes of madness. Keep it up. SUPPORT METAL, NOT TRENDS!