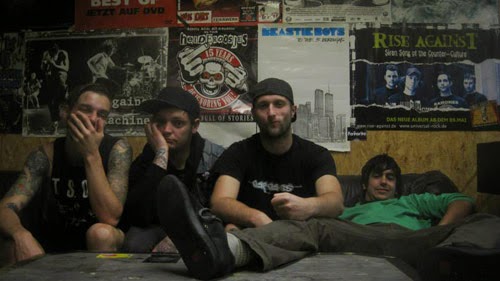 Sure. The Band passed through several Line Up Changes in the past Years and it seems like it finally found a consistent Line-Up. Since it was a bigger problem in our first years to get more shows and release more material (due to permanent line-up changes) we are very active now and released 2 Ep´s and a Full Length in the past 3 Years. We´re touring 1 – 2 Times in a Year and are constantly searching for new shows and also want to bring out a new Full Length next year. So the things are looking good these days.

Seriously. It´s the same stuff we always do ! J it´s skatepunk with a big metal touch and some hardcore. You will find 4 songs on it . one metallic hc-punk song, one clear and fast skatepunk song, one 90´s pop punk song and 1 very short and fast thrash metal song including blast beats. I think there´s something from everything we do. So people who like us should be satisfied J

Also here I have to say we sing about the same J we´re still pissed on the world and so it goes against exploitation, being blinded by the media and the cold attitude of the biggest part of our western civilization. But of course we try to give it all a positive note and to encourage some people to stand up and change something. Like in the Song “Retrogressive”. It´s not too late to stop what we created…

Jep. The Band was called Softcore, but only because it was their name when I joined the Band. At the Beginning we we´re almost a Millencolin Cover band and slowly I began to write songs and the music progressed. The Members changed until there was no one left except of me (Bart – Guitars and Vocals). So I decided to also change the whole Bandname as this was a different Band now. But we still play some Songs of the Softcore era and some Songs of it were recorded on our first Album “No Way Out” in 2005.

Hm. Good question. For sure we had some of the best gigs on our Ukraine and Russia tour last year. The people there went completely crazy. Especially Moscov was unbelievable. Generally you can say that gigs in eastern Europe kicks ass. Sure, we also played with some great and big bands and always had a blast with em but it´s the small concerts with nice atmosphere that we love. The feeling when you play somewhere hundreds or thousands of kilometers from home and there are still people who want to listen to your songs and even sing with you. This is by far one of the best feelings you could get in life. And of course we give it back to the people – we give EVERYTHING on every live show and do all we can to entertain the people. There is no choreo or something like that but we jump around everytime and everywhere we can, motivate the people and sweat our asses off. No matter if there are 3, 300 or 3000 people. And we are much faster and heavier live.

We just finished our tour in june. We we´re in eastern Europe again and in Belgium. We plan another short trip to Belgium and Netherlands and also 2 gigs in france. A bigger tour is also planned for the spring of the next year. And maybe, just maybe we will go to asia soon J We have to take holidays for our trips and already spent all of our holidays for touring this year J you know – touring when you have a full time job is not easy. And as we do everything by ourselves (diy) there is no label or a tour manager behind it. We organize, book and promote everything by ourselves. Some People are helping us if they can but in general there is no professional person behind it. Our gigs, shows, albums and everything else is 100 % DIY ! It´s hard, it´s much work but that´s the price when you do Music just because you love it.

7. On a worldwide level how has the feedback been to your music by fans of punk, hardcore and metal?

Actually it was always very good. From what I can tell there was never a person, who was not satisfied. The thing is that even people who don´t like this kind of music could at least respect it for the technique and performance and the honesty in it. Our Music is liked by Punks as well as by metal heads. We have loads of short thrash metal songs in our set and mix it with skate punk, hardcore, crossover, pop punk, funk, dub and jazz. So everyone who is a little open minded to music styles should find something. The best feedback we always receive in Asia, Canada and eastern Europe. Also People from Brazil often like it. Like you see these are all places that are very hard to reach for us and it´s very expensive to get there. But we definitely want to play there soon. Also we want to come back to Ukraine and Russia. Seriously if there is anyone who can help us with this – please contact us J


8. Currently the band is unsigned, are you open to working with a label in the future?

Yes we are ! like I mentioned below – it is very hard for us to keep it up all alone. Especially as the band is finally getting a little bigger now and we came to a point where it´s not possible anymore to manage all alone. We want to focus more on just doing music and playing and would be glad if anyone could support us in what we do !

Don´t know. But it´s always the same – a band is progressing with what they are doing. So I am pretty sure that all we do is going to be just MORE J more melodic punk, more metal, more funk, more mixing of styles. more more more . Also we want to do 1 or 2 smooth reggae songs and of course to combine it all to a unique style. But of course like always – we don´t put all in one song. It´s divided. If we do a metal songs then it´s a metal song. If we do a pop punk song it´s a pop punk song. We don´t like this “let´s put all our ideas in a song and do a weird and almost unlistenable collage of our ideas and call it a song” thing. So the songs itself are straight . It´s the combination of all these songs together on one album that makes the difference. And we want to continue that. Also we plan to make something like a rhapsody. Don´t know how long it will be and how it´s gonna sound like. But we are sure that there is a big potential to create something that maybe even exceeds the genre. But it also depends on the fact, if there is someone who wants to support us with this and is interested in releasing it.

10. What are some of the bands or musical styles that have had an influence on your music and also what are you listening to nowadays?

Tough one. Speaking for me now it´s my love for skatepunk and thrash metal. I can´t decide what I want to do so I do both J but when it´s not skatepunk or thrash metal that influence me it´s also stuff like queen (I think the biggest band ever) or pink Floyd that I love. I almost love everything except of techno and stupid, cliché radio music. If something has a heart and a soul – it deserves to be respected. No matter what genre. And I find a lot of good things in almost every genre for me. I love oldschool hip hop for example the same as thrash metal, punk, hc, reggae, funk or jazz. Music unites. If it comes to what I listen nowadays I have just to name some: failed states by propagandhi is still blowing my mind. Almeida and fair do´s from the uk also as well. The last Napalm Death Album also nailed it. And I am really really really looking forward to the new strung out album. I fucking love this band !

None . haha. I skate from time to time but the older I get the more I am afraid of breaking my hand for example. Also 2 of us are fathers so if our love is not going in the music – it´s going to our kids or ladies. Besides that I think we have no special hobbys. Making music is taking up a lot of time already so there´s no time for any other big hobbys ;)

I want to take the opportunity and thank everyone who supported us in the past 15 years. You know who you are ! Stay positive ! There´s so much exploitation, hunger, injustice, greed, fascism and religious bullshit in the world everyday and everywhere – so don´t let it get you too! Thanks.

Posted by OccultBlackMetal at 4:03 PM