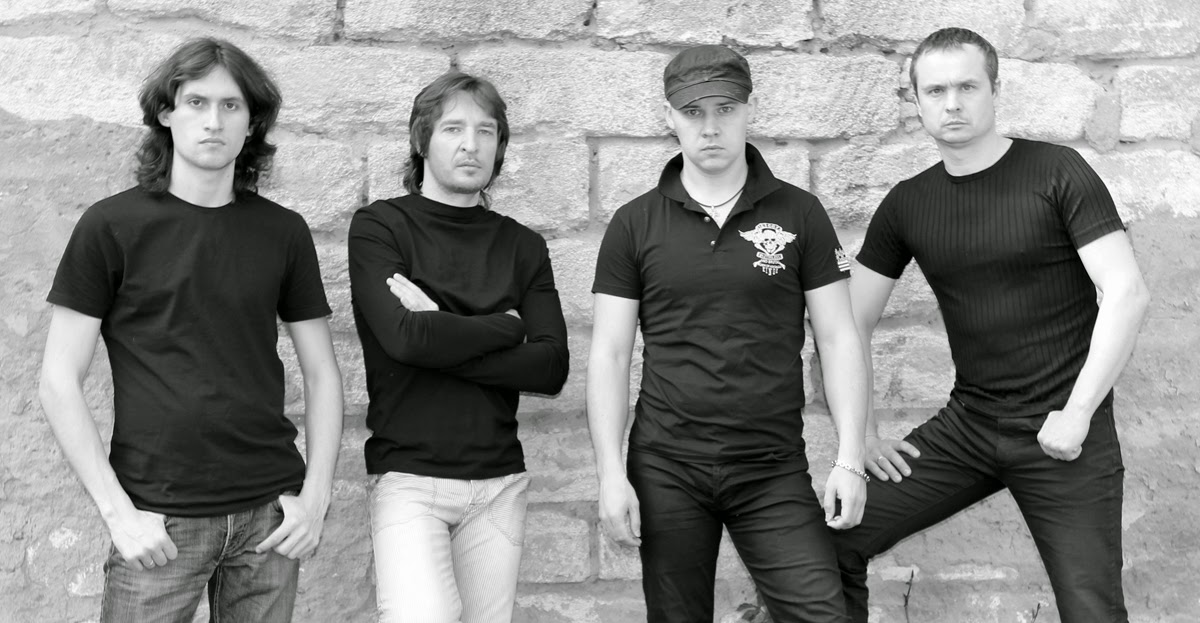 Our band was formed recently, namely in the autumn of 2013. All band members are professional musicians. Until Overwind Alex, Anton, Sergey were busy with their local projects (Hardman,Golden Gate…) Misha acted more as a session musician, although experience in the genre of heavy metal he already had. And when all gathered, we found musical ideas that wanted to implement it in such a composition. We immediately started studio work and soon ideas were embodied in our debut album.


2.Recently you had released your first full length album, how would you describe the musical sound that is presented on the recording?

As for the sound, we wanted to achieve contemporary dense, punchy sound, characteristic of modern metal bands. At the same time, we wanted that would sound was somewhat transparent, readable that  would all elements were heard. This is probably more characteristic for style fusion and progressive rock.

Lyrics - this is a very important element for any band, for any artist. Our lyrics have a certain philosophical load affecting the inner world of man, as well as his experiences and hopes. In addition, some of the songs presents social nuance that affects some regulatory aspects of modern life, such as fairness, justice, war and peace, spiritual beliefs of the individual. All of this is present on the our album in a allegory form.


4.What is the meaning and inspiration behind the name ‘Overwind'?

You see, we wanted to memorable name for our group and at the same time that would have liked us too.....perhaps it was the main condition. And then Anton suggested the name Overwind. Proposals were many, but we soon realized that this is the right name for us. There is a certain mystery, magic, if you want))

We have not given any concerts in this line up yet. Each has a decent experience of playing, both in Russia and the countries of Europe. But not as part of Overwind. Hopefully, the best concerts we have ahead!

6.Do you have any touring or show plans for the new album.

Yes! We negotiate about tour in Europe in support of the new album. Also we are negotiating at the expense tour with a famous band. Details will be soon. Hopefully everything will turn and we will please fans of our show.

7.The new album came out on M & O Music, do you feel this label has done a lot of help for you when it comes to getting your music out there heard?

When we prepared the album "Illustrator", we sent our album on a different labels. Many of them have decided that they want to deal with us and offered a contract. We opted for "M & O Music" and realized that did the right thing. This is a very sociable people who do not throw words to the wind and strongly support their artists. We were lucky. Nice to feel that kind of support!


8.On a worldwide level how has the feedback been to your music by fans of progressive metal?

While only positive reviews came. We understand that 100% of our stuff can not be called prog rock, as it has elements of heavy metal and may even hard rock and art rock.  Anyway, we waiting reviews  from all other lovers of rock music!


9.Where do you see the band heading into musically during the future?

We already have some good ideas for the second album. We want to experiment on the basis of the vision that we have identified in Illustrator - powerful riffs and melodic choruses. Although it is quite possible that we will make something new)) a good test of our ideas will be concerts. On a concerts are always seen in the right direction you're going or not.

We have very different non-music interests, but in a some things we are solidary, for example: sport(football, basketball, some extremal types of sport...), cinema, books,computer games e.t.c.

We hope, in the near future to please fans with the second album. See you at concerts!

Posted by OccultBlackMetal at 2:45 PM