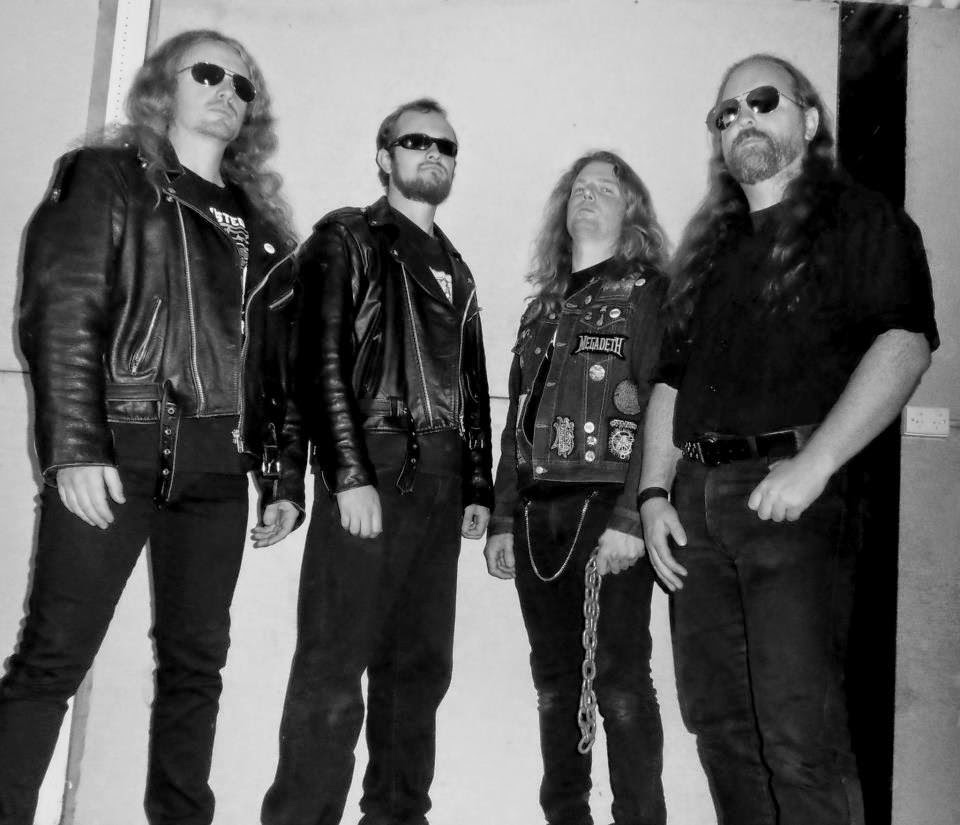 1.Can you give us an update on what has been going on since the recording of the new album?

Since the album was finally completed earlier this year, we've been steadily rehearsing and preparing for live performances. Our first gig back after an absence of nearly two years was early in June for a metal festival here called Black Conjuration Fest. Two years is a long time between drinks, I know, but unfortunately this was unavoidable due to InPHILtrator (our bass player) sustaining serious injury in a road accident at the end of 2012. Yes friends, traction is the only action you'll get when you clash with a semi-trailer truck whilst riding your bike! (Though between you and I, I suspect that his love for the more curvier ladies got way out of control on that fateful day!) Okay, all bad jokes aside, we're all very fortunate (him most of all, hahaha) that he's able to make a full recovery in due time. The situation could've been far worse. Our original goal before the accident was to have the album recorded and out last year, but as bad luck would have it, that wasn't to be. In the meantime though, the album, minus the bass of course, was quickly recorded and fine tuned to the best of our abilities. We did consider the option briefly of acquiring the services of a session bassist, but that didn't sit well with us in the end, so we opted to put everything on hold until he was well enough to start playing again. After a year in hospital, InPHILtrator was out and making rehab his bitch like the heavy metal warrior he is! I can tell you, the feeling of emerging from limbo after a year was quite a rush for all of us, and it felt great to get the ball rolling once again. So the album was finally finished in January, which freed us to finally start focussing on the live show once again as I mentioned earlier. We've also in the last couple of months been hard at creating new compositions intended for the next album. All guns are blazing!

> 2.You have a new album coming out in August, can you tell us a little bit more about the musical direction the band has taken with the full length and also how does it differ from the 2 split's and demo you have released in the past?

The main goal ultimately was to capture that classic early 80's sound and feel. Style wise, I wouldn't say it's too far removed from the earlier releases, though it's definitely more polished and melodic overall, as you'll find in a re-recorded version of 'The Metal Embrace' which originally appeared on the split 7” with Stryker in 2012. Of course, a full length allows us to show a broader range of emotion as compared to a single or a short demo.
>
>
> 3.Most of the band members have been in some very extreme metal bands in Australia, what was the decision behind going for a more classic and traditional metal sound with this band?

We're motivated purely by passion for heavy metal! Even though we have, and still do play in extreme metal bands, pure, true old-school heavy metal is what we all love and for the most part grew up with. (InPHILtrator is the youngest of us and had yet to spew forth unto the world when we had begun our metal embrace hahaha)The desire to play in the more classic sound was always there, I guess it was only a matter of time until our like-mindedness united as one. Denimal (drummer/cowbell annihilator) has had Johnny Touch going as a solo/side project for quite a while, and having it emerge as a fully functioning serious band now has been quite a boon for him. Speaking for myself as a vocalist, though I've been listening to classic heavy metal for many years, it's only been in recent times that I've been training my vocals to actually SING! I've been a death metal vocalist for many years, so it was quite a shock to the system for me in a way. Indeed, I feel like I've come far in a short time, but when I compare myself to guys like Ronnie James Dio (god), I have a long way to go hahaha.
>
> 4.What are some of the lyrical topics and subjects the band explores with the newer music?

There's a shared passion for 70's through to 80's B-Grade horror/sci-fi/action and martial arts films within JT, so you're gonna find lyrical topics inspired by this. Not always though, we do like to vary it a little from tongue-in-cheek to more realistic subject matters. On one side you have topics dealing with post war syndrome, dealing with depression, abusive priests to ritual sacrifice, heavy metal gigs in hell and hermaphrodite serial killers!
>
>
> 5.What is the meaning and inspiration behind the name 'Johnny Touch'?

It was Denimal's idea for it to sound like a 'street warrior' from a street gang, as you might see in one of those 80's B-grade post-apocalyptic future films. He settled on the name Johnny Touch, as he felt it stood out and is easy to remember, and not likely to forget!

>
> 6.What are some of the best shows that the band has played so far and also how would you describe your stage performance?

So far we've only played live 3 times, and all of them memorable! There would've been more by now had it not been for Phil's accident though, but shit does indeed happen! We're constantly looking at ways to add to the live JT experience, such as our own extra lighting and stage effects. Right now, what you get is straight out Johnny Touch heavy metal. Heavy lights, heavy smoke, heavy hair (well, some of us at least :-P), and heavy metal!
>
>
> 7.Do you have any touring or show plans once the new album is released?

Yes indeed. We have a show in Sydney at the end of October this year as part of the Steel Assassins festival, which is mainly a true metal/power metal festival, and two shows set in Auckland and Wellington New Zealand at the beginning of 2015. The Wellington show is part of a festival they have there called Strike Of The Beast. This will be our first time away from Australian soil, and we're all really looking forward to some head bangin' with the NZ hordes! That's all that's set for now, but we are looking forward to some more possible dates into 2015.
>
> 8.So far the band has been a part of splits with Stryker and Doomed Beast, what are your thoughts on the bands that have participated on these albums?

Unfortunately I don't know much of Stryker or Doomed Beast past the tracks that are on the splits, but Stryker's 'Possessed By Heavy Metal' and Doomed Beast's 'Going To Hell' are great tracks and compliment our contributions on both splits well indeed!
>
>
> 9.On a worldwide level how has the feedback been to your music by fans of metal?

So far the feedback has been great. We're still a relatively unknown and underground band, but we've gotten a great response from the shows we have done so far, and from the demo and 7” releases. The feedback for the album has only just started to trickle in, but so far it's all positive. Shadow Kingdom Records has done a great job of promoting the album and getting our name out there. They really believe in what we're doing, and that's a great feeling having that kind of support!
>
> 10.What is going on with the other musical projects these days that some of the band members are involved with?

Besides Phil, whose sole band is Johnny Touch, Jamie and myself also play in a death metal band called Beyond Mortal Dreams, which is a band I've had going since the mid 90's. Right now BMD has just begun playing live again after a time working as a recording band only. We've recently had a new 7” EP out earlier this year, and are currently writing material for a new album intended for a 2015 release. I also play bass in a dark death/black metal band called Oath Of Damnation which has just put out it's first album and has been playing the local circuit. Denimal has also been keeping himself quite busy with Cauldron Black Ram, Stargazer, and Intellect Devourer. CBR having released a new album earlier this year, and both Stargazer and I.D. Set to release albums later this year/early next year.
>
> 11.Where do you see the band heading into musically during the future?

Basically, we're continuing to expand on what we created with Inner City Wolves. So far the new material has kept that early 80's feel of traditional heavy metal. Long term, I couldn't really say. You don't really know what experiences will shape your ideas down the road, but short term, right now, you can expect a continuation from ICW. Stronger. Heavier. Catchier.
>
> 12.What are some of the bands or musical styles that have had an
> influence on your music and also what are you listening to nowadays?
>
Mostly as a band, the classic heavy metal style/sound that came out of the late 70's and early 80's is what drives us. We do see Johnny Touch as kind of a rekindling of the spirit and atmosphere that the music of that era possessed. As a vocalist, and particularly in a traditional sense, singers like Ronnie James Dio, Bruce Dickinson, Rob Halford, and even King Diamond have been a great influence on me. Personally, I would say that Dio is ultimately the strongest influence of the 4, though perhaps you may not exactly hear it. The strength and character of his voice is certainly an aspiration for me. As far as what I'm listening to lately? At the moment pretty much a lot of different kinds of metal. Stuff like Dio or Judas Priest, Black Sabbath, Led Zeppelin, to bands like Dead Congregation, Morgoth, Incantation, and Hobb's Angel of Death have been on high rotation. Also at the moment a lot of Devin Townsend and Powerlord. I've been really digging Powerlord's 'The Awakening' album a lot lately.

> 13.What are some of your non musical interests?

As I mentioned earlier, we have a collective interest in a lot of older B-grade action, horror, martial arts, sci-fi films and literature. Some of us also have a keen interest in, and practice various forms of martial arts. I have a love for art, and produce t-shirt and album cover designs in my spare time.
>
>
> 14.Before we wrap up this interview, do you have anyfinal words or thoughts?
Just to say thank you for your time and for this interview, and horns up to all the Johnny Touch bangers out there! This is Pahl from JT sayin' keep on rockin', and feel the metal embrace! Hailz!!! www.shadowkingdomrecords.com

Posted by OccultBlackMetal at 12:44 PM