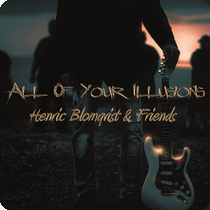 Synths  start  off  the  album  bringing  in  some  darkness  before  adding  in  melodic  guitar  leads  which  then  take  the  music  into  a  more  classic  rock  orientated  form  of  metal  sound  along  with  some  psychedelic  sounds  and  melodic  vocals  and  there  are  also  great  amounts  of  prog  elements  being  utilized  in  the  music.