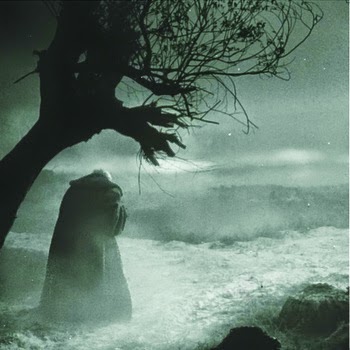 1.For those that have never heard of you before, can you tell us a little bit about the project?

My name is Andreas and I’m the sole member of Sadhak. Sadhak is a band that released a two-track demo cassette September 9th 2013. Thecassette was re-released by Shadow Kingdom Records in the spring of2014.

2.How would you describe the musical sound that is present on the ep?

It’s the projection of this feeling I have that I don’t know how to describe in words. It’s a bit of a cliché, but I’ll leave it to others to come up with technical descriptions of the music.

The lyrics are important to me and I have a clear intention with them,especially when put together with the remaining two songs. I don’t think I can communicate it more strongly than with the combination of the music and the words, I think that’s what songs are for. My answer is the songs themselves.

4.What is the meaning and inspiration behind the name 'Sadhak'?

It’s about knowing one’s goal and living purposefully to obtain that goal, to do what thou wilt. It’s about striving to be accomplished. We ultimately derive meaning from the void and it’s about coming to terms with that.

5.With this project you work all solo, how would you compare it to working with a full band?

On the practical side of things, it was easier to organize since there was no need for multiple people to find free time at the same time. The nice thing about being all alone in the rehearsal space for hours on end when you record is that you get completely absorbed in what you’re doing and you just become the process. There is no jocular banter or anything that pulls you out of that place so you stay focused. Recording alone is a bit of a hassle though. I did the drums straight on cassette so I had to remember the song structures and play” the riffs in my head while playing the drums which is what I had read Fenriz did. It’s easier if you’re recording with a full band.

6.I have noticed you can play a variety of many different musical instruments do you feel this makes your music sound a lot more powerful?

When I was younger I opted to teach myself a bit of everything instead of becoming really adept at one thing since I was more fascinated with how a composition works as a whole than the individual performances and wanted to understand it. It puts some limits on what I can do, but the strength in it lies in that I’m always looking at the bigger picture when writing, always thinking about what I want to convey rather than what I want to show.

7.On a worldwide level how has the feedback been to your music by fans of doom metal?

The feedback I have received has been great, people that contact me seem to connect with the music and that is all I want. If I can give someone a way to see the world through my eyes that’s all I care about.

8.What is going on with the other musical projects these days that you are a part off?

In High Priest of Saturn we are writing a new album that is nearing the stage where we can just rehearse and refine it. The foundations for all the songs are there and we will probably record it in August if we have enough time to rehearse before that.In Mabuse we’re also writing for a full length and we’re both writing this time so we have a million riffs and are just trying to find out which direction to take. I’m moving to Oslo in late June, so it’ll be easier then.Resonaut isn’t doing much these days, but we want to do a new release when the High Priest album is done. We have some plans for that band, we’ll see if they come to fruitionAlso, I did drums for a new avant garde black metal project last year that I think only has some vocal parts left to be completed and I played the drums on the demo/EP (I’m not sure) of a new stoner band that should be out soon. I’m not a member or creatively involved in those two bands though, just a hired gun.

9.When can we expect a full length and also where do you see this project heading into musically during the future?

I want to record the album in July, so hopefully this year. I haven’t written anything for the next record, but the songs I have in my head are harder. I have more of an atmosphere I want to create than a technical description, the influences I draw from are just a means to an end.

I don’t think Sadhak would have sounded the the way it does without Unbeing and Selvhat. Earth and Burzum are also major influences, and a lot of 90s doom metal like Revelation and bands of that ilk.Playlist is ever changing, there is just too much good music. I see in my pile that the last five I played was:Tusmørke - Underjordisk TusmørkeEarth - Phase 3: Thrones and dominionsObliteration - Black Death HorizonRanger - Knights of DarknessGrails - The Burden of Hope

I’m writing my master’s thesis on bio-inspired artificial intelligence, I guess that’s an interest. I watch old movies and readold books. I like to read religious texts and anything on the history of science or old civilizations, especially in relation to cosmology. I like documentaries. I did olympic weightlifting for a while, now Ijust do the compounds. I’ve recently taken up chess which is highly addictive, don’t try it, not even once.

The Norwegian scene is great right now watch out for the upcoming albums by Spectral Haze, Purple Hill Witch and Flight. The Black Magicalbum was fantastic and Mion’s Hill was top notch. I have also heard the upcoming Gouge album which might will rip you apart.Thank you for interviewing me and thanks to everyone who is interested in Sadhak, I really appreciate that someone wants to listen to what I have to say. Check out the album here http://shadowkingdomrecords.bandcamp.com/album/sadhak

Posted by OccultBlackMetal at 3:52 PM