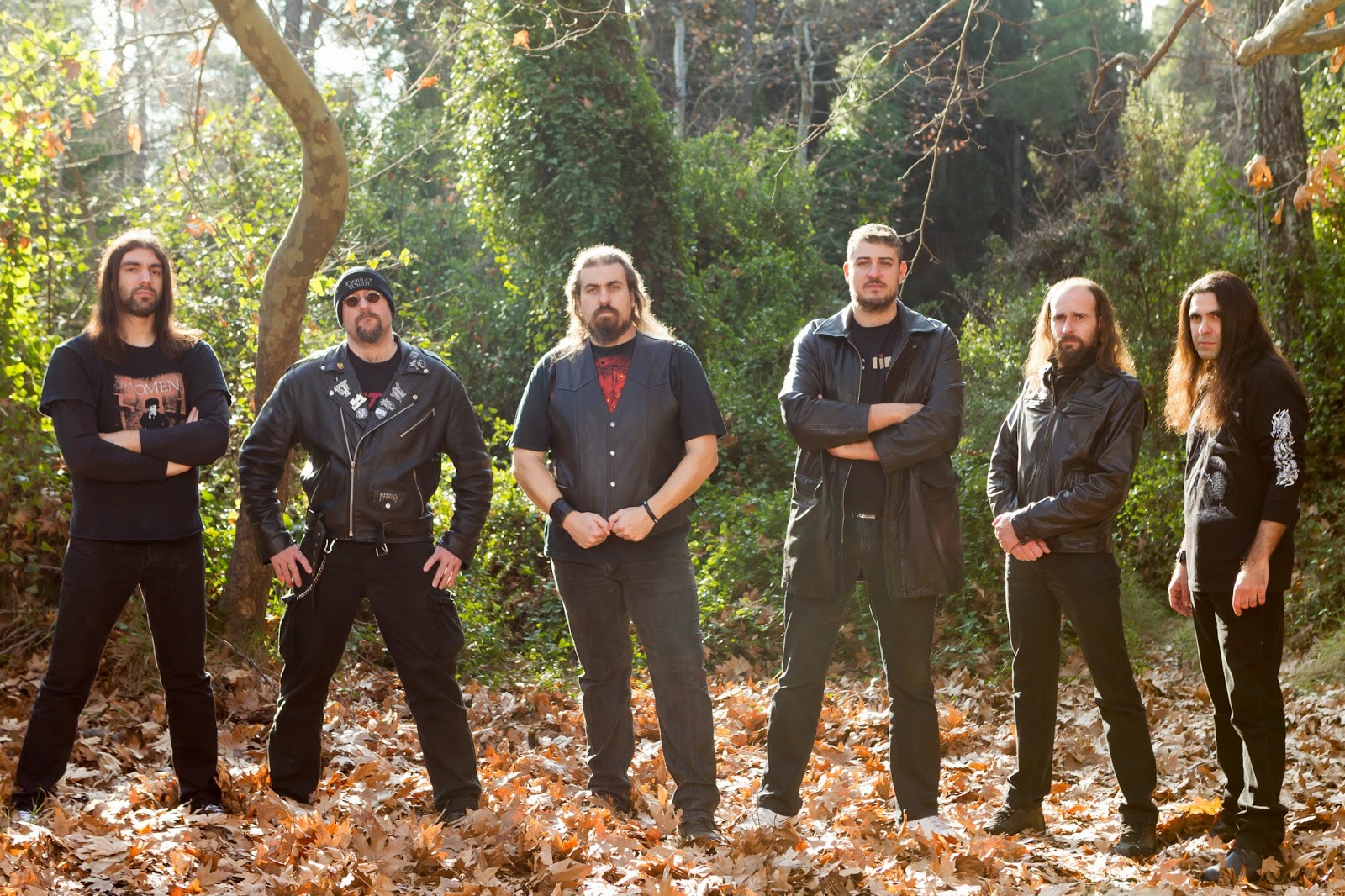 After the recordings and the whole production that were finalized in February, the band is mainly focused on promoting the new album that will officially hit the market on May 2nd. Before that, the new album will be available also on this years’ edition of Keep it True festival in late April.

2.You have a new album coming out in May, can you tell us a little bit more about the musical direction of the new recording and also how does it differ from your past releases?

The musical direction of the new album is practically, the same of the previous ones!! And that is “epic metal”! We are 100% into this genre of heavy metal and this is what we like to do! The difference from the previous albums, if we may say so, is that to my ears, it’s even more epic. We’ve put in parts with choirs and some symphonic instruments that give an even more majestic and bombastic feeling and atmosphere without getting anywhere close to symphonic metal or stuff like that!

3.This will be the first album in 6 years, can you tell us a litlle bit more about the gap between releases?

The last 6 years have been quite hard for the band. After Manolis Karazeris, Marco Concoreggi and Gus Makrikostas left the band each one for his personal reasons, there was a decision that needed to be made. Either we split or we continued the band. Since I and the other original member Kostas Tzortzis felt that we had more “stuff” to give, we decided to look for new members and see how it would turn out. After searching for guitar and bass guitar players and after checking quite a few, we finally recruited Antreas Sotiropoulos on guitar and Stavros Aivaliotis on bass and formed the basis of the band and started working on new material. Meanwhile we were also on the lookout for singers and tried out several ones, like John Papanikolaou (ex Inner Wish) Gabrielle Grilli (ex Doomsword) with whom we performed some live shows but it didn’t work out in the end. On October 2012 we were set to support Grand Magus on their Athens show and 3 months before, we were out of singers!!! So then we came up with the idea of Gerrit Mutz at least to help us out on this gig! He happily agreed on this, and then, the rest is history! The reaction of the fans plus the feedback we were getting for this show drove us to recruit Gerrit as well, and everything else fell into place!!!

4.The lyrics on the new album cover Greek Mythology, can you tell us a little bit more about your interest in this topic?

It’s true that as Greeks, we have Greek Mythology constantly in our heads. We grew up with it, so it’s a field we know really well. But the new album doesn’t only cover themes of the Greek Mythology, but generally ideas and beliefs that derive from every day life, all presented through an epic point of view. I mean, you don’t necessarily need to have lyrics only about battles to have the epic feeling flowing throughout a song!

5.What is the meaning and inspiration behind the name 'Battleroar'?

We originally came out with the name “Battleroar” while listening to Heavy Load’s song “Singing Swords” (… I loved the battleroar) and it gave out all the epic meaning we needed for the band’s name! Back at the time (year 2000) we all wanted a name and music that would make the listener picture and imagine scenes of greatness and be emotionally aroused!

Since 2000 that the band was formed, we’ve played many shows all around Europe. I can easily say that each and every one had it’s own special moments! But if I definitely had to highlight a couple, personally I would mention our live show in Laakdal – Belgium on our tour of 2006 that the place was so packed and the crowd so energetic that it was impressive! Even Rudy of Ostrogoth hit the stage that night and made a cover of Full Moon’s Eyes!! Another great moment in terms of live shows, was our first appearance in Keep it True X festival that we enjoyed it really much! On stage you need to deliver as much passion and energy you can through your music and songs. After all, that’s why you are up there!! Personally I dislike bands that just go on stage, play their setlist and get off stage without even sweat in their face!! That’s NOT heavy metal for me!! What we do when we mount the stage is give our very best in terms of energy and performance and try to be as professional as we can be!!

7.What are the touring plans you have for the new release?

We are in discussions as we speak for some live appearances around Europe from September onwards. Nothing confirmed yet, but for sure we will be touring in winter of 2014. Another concert highlight, will be next year’s anniversary edition of Up the Hammers festival in Greece where Battleroar will play both days, one with the current line up and the other with the old line up!! Make sure you don’t miss that!!!

8.On a worldwide level how has the feedback been to your music by fans of power and heavy metal?

The feedback globally has been quite encouraging throughout the years. Since the release of our first album, I remember getting uplifting messages from many different countries.  Moreover, during the last 6 hard years, we received many emails and messages from all over the world not to quit and to try and make things work again!

9.What is going on with the other musical projects these days that some of the band members are involved with?

For all members of the band, Battleroar is our main musical activity. However every one of us has other projects going on as well. I for example play for another band called “Selective Oblivion” and we are about to release the debut album within this year, which is totally different than Battleroar and its epic style.

As said before, epic metal is our cup of tea. This is what we like and this is what we want to do and know how to do it. So under no circumstances will we change our style. Otherwise, it’s not gonna be Battleroar. But this of course doesn’t mean that we are not experimenting and/or trying to input new sounds in our music.

11.What are some bands or musical styles that have had an influence on your newer music and also what are you listening to nowadays?

Well, obviously all the epic metal bands of the past (and not only) have an influence on our music since day one. After all, we are all fans of Manowar, Manilla Road, Omen, Cirith Ungol, Heavy Load etc. Nowadays, music is much more diverse and there are a lot of good bands out there. Having said that, I must add that personally I m more into the “traditional” kind-style of heavy metal and that’s also what I try and usually do in our music. For example, Atlantean Kodex is a newcomer that I believe will play their own part and have their own place in this music!

Not sure whether this would interest someone or not (haha) but I m into snowboard for example! I also travel a lot also due to my work and that gives me the opportunity to meet new people, new attitudes and beliefs and of course… new kinds of music!!

First I would like to thank you Scott and the undergroundmusickzine for your interest towards our band. I hope you and your readers will enjoy our new album and hopefully will see you all on the road one day!

EPIC METAL TO THE END

--
Posted by OccultBlackMetal at 9:54 PM